Toping the circuit with 24 victories Jenkins setting his NL personal best ....in 1974 the formidable Canadian changes circuits and puts up his career best 25 wins for the Texas Rangers... after 1971  Fergie captures another 20 wins capping off his 6th consecutive year....Seaver hits the 20 win mark for the second time in his career, a benchmark he would reach 5 times.....Carlton reaches the 20 mark for the first time....Carlton puts in a career year with 27 wins the following year overwhelmingly taking top honors....despite the fact he was traded to the woeful 1972 Phillies....for team comparison the next best hurler won 7 games....Carlton wins 20 or more four more times, leading in NL wins three times....A major surprise Downing wins 20 for the only time his in career....notably surrenders Hank Aaron’s 713th home run in early 1974. 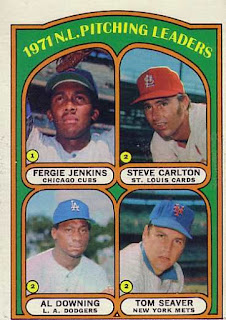 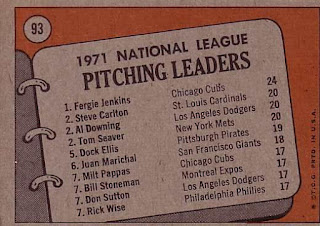