Jim's career path with franchises repeats itself twice with a stint in Oakland sandwiched in between…Son of major league catcher Jim Hegan…Was the Cleveland’s bat boy when dad played for the tribe….Father and Son career span were two years apart....Signed out of the Yankees organization he was the first player purchased and signed by the Seattle Pilots June 1968…Finished that season in Yankee farm system….Hit the first Pilot franchise home run ever on opening day….Had a fast start for the first year Pilots and was named to the all star team…did not play due to injury and was replaced by Don Mincher…Followed team to Milwaukee in 1970 and was the regular 1st baseman appearing in 148 games…hit .244 and drove in 52 runs in some what an underachievement...1971: A slow start resulted in being sold to Oakland…The trade off was being a on winning team but becoming seldom used subsitute…Stayed in Oakland until August 1973 when sold to Yankees for second go round in NY…Dealt to Milwaukee again mid 1974….Played there in a variety of roles until 1977….First Brewer to hit for cycle in 1976….Did play by play and owned a series of batting cages in the Milwaukee area…in  died in 2013 was married for 50 years...*note one of my all time favorite card photos. 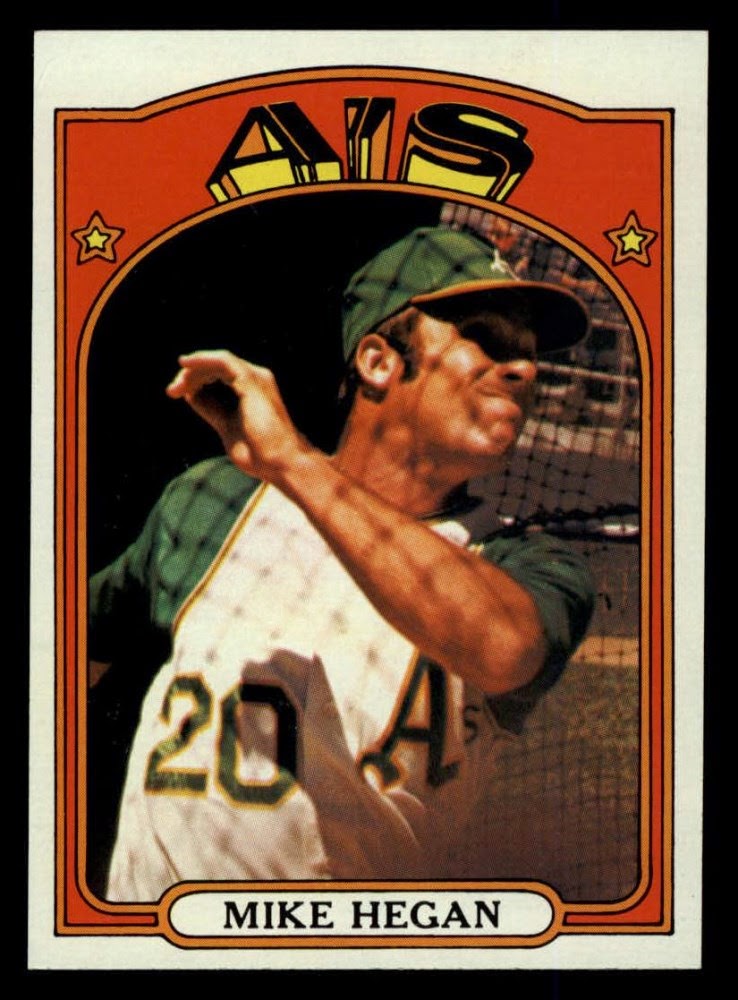 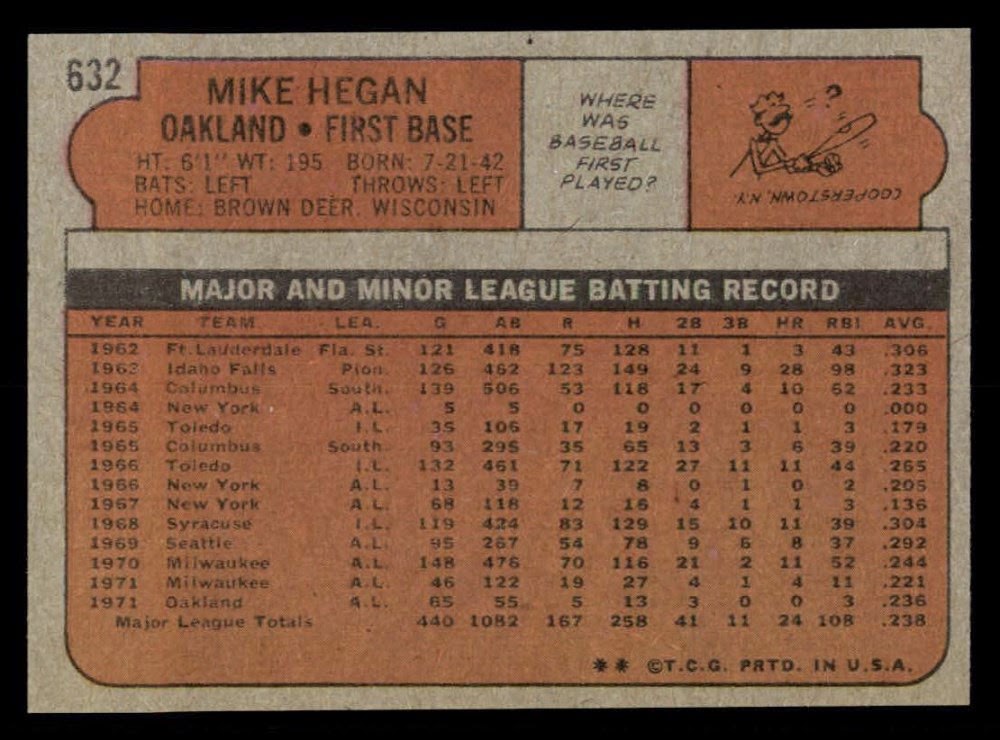 Posted by Douglas at 7:59 AM No comments:

Well traveled career reserve catcher…mostly played with the SF Giants 1965-70…signed as a free agent by the first year Los Angeles Angels in 1961…worked his way up the farm system…made it to AAA Hawaii where he hit .308 in 1964 and earned a cup of coffee with the big club…Traded in off season to Giants…gradually gained more playing time but pitcher seem to find out his weaknesses and hitting average suffered…Finished out the 1969 season with the Giants with a .196 BA…Purchased by the Expos prior to 1970 season…hit well in les Expo land but was quickly traded to Cubs to replace a ailing Randy Hundley…Time with the Cub was the closest Jack ever came to starter status…Purchased by Houston for 1971…hit .276 in 174 at bats…finished out MLB career splitting time for Astros and original club California Angels…Played in minors two years after leaving MLB. 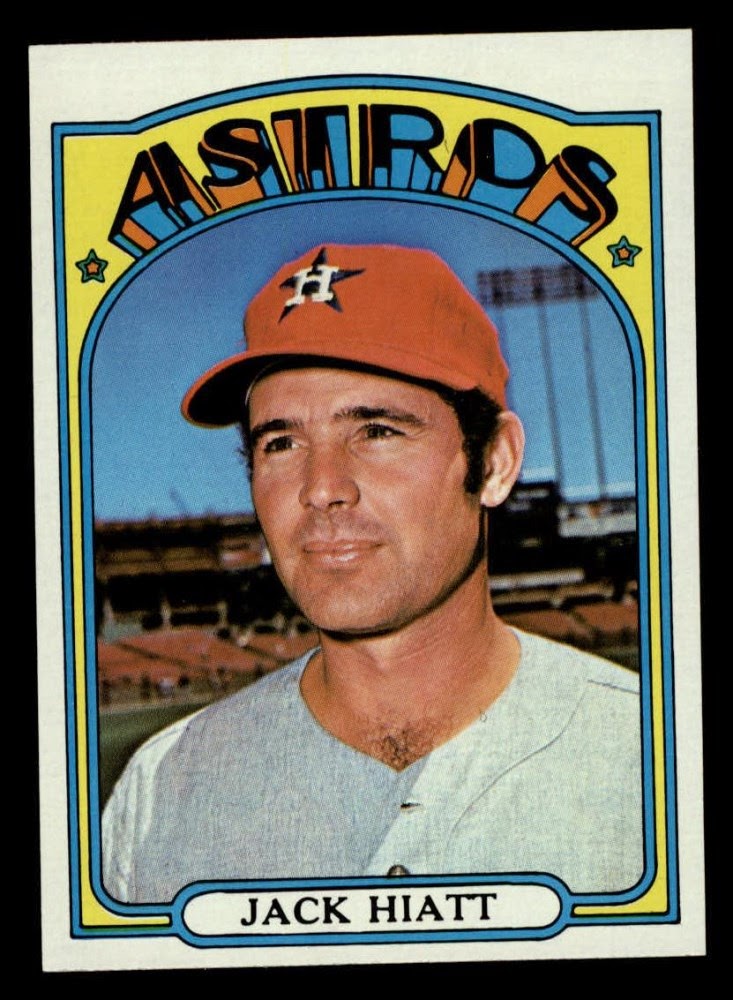 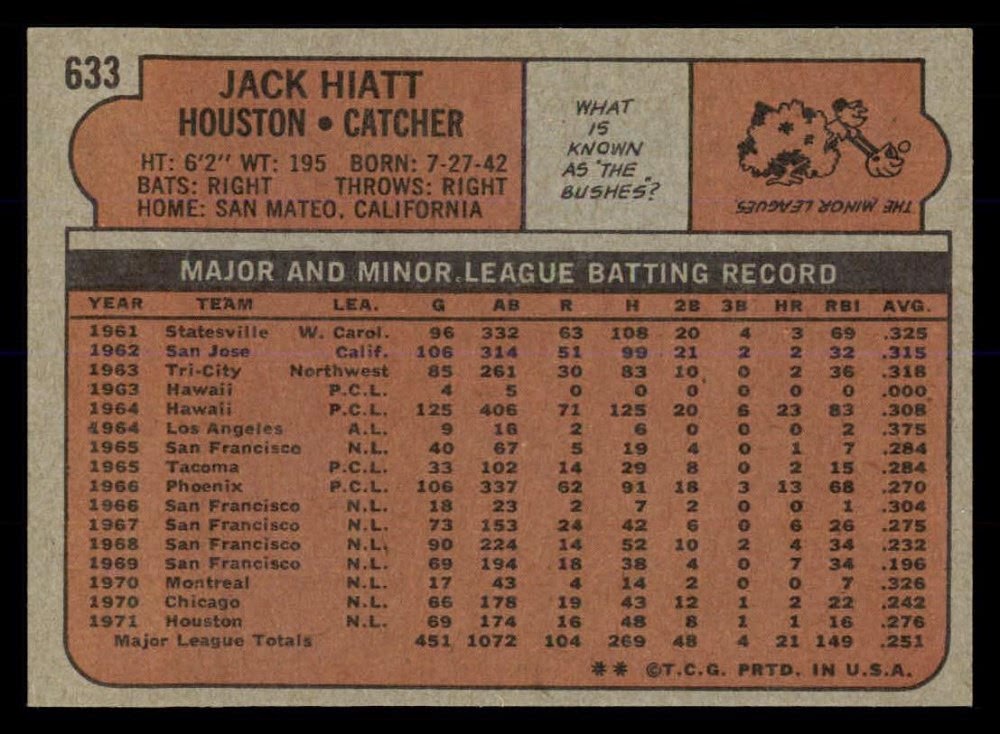 Posted by Douglas at 9:18 PM No comments:

Short lived starter for the Twins…Played exclusively in the minor 1971 going 16-10 for PCL Portland…Lead circuit in wins…Previously the majority of his MLB experience was during 1969 Woodson’s rookie year…Went 7-5 mostly as a reliever…Ineffectively relieved starter Bob Miller in the 3rd game of the first ever ALCS series coming in the second inning…Inexplicably 3rd starter Jim Kaat was sidestepped from playing... role diminished in 1970 splitting 21 appearances for the Twins and AAA demotion….still managed to appear in ALCS with similar poor results to the prior year in wildly lopsided loss…1972 brought found in a steady spot in the Twins rotation…Responded with 14 wins a career best…Was high in walks in a hits per 9 innings…Fell to 10-8 record in 1973 with an increase of ERA…Continued  downward spiral with poor start in 1974…was traded to Yankees mid season where his fortunes did not change…Played briefly in minor 1975. 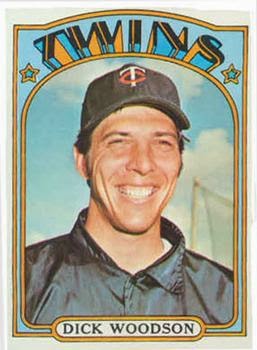 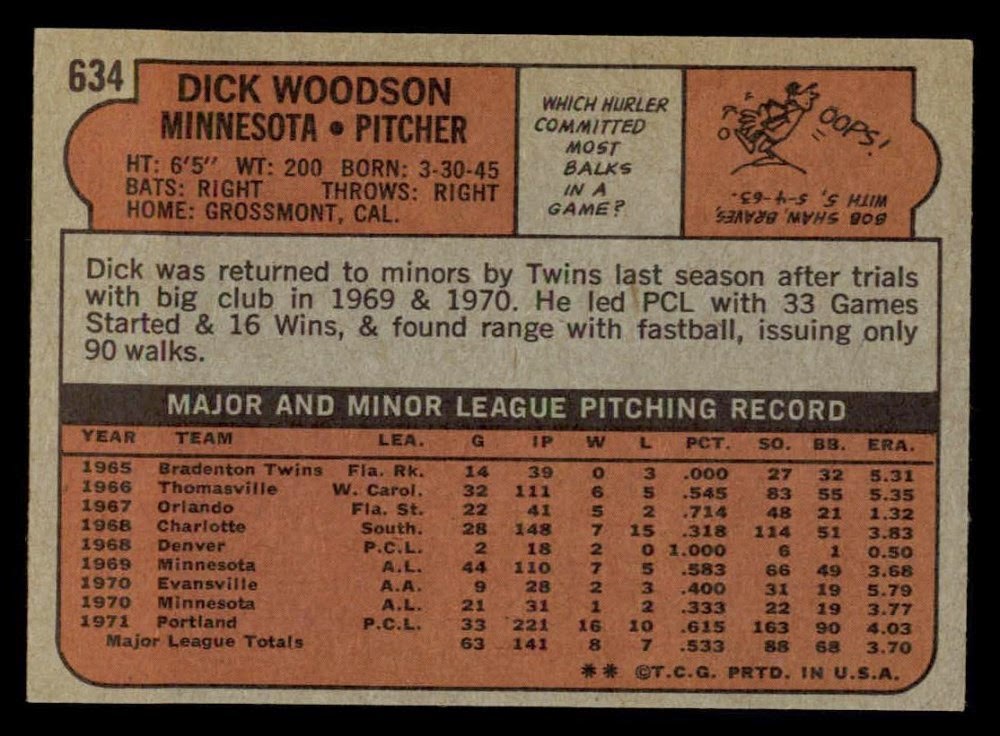 Posted by Douglas at 8:21 AM No comments:

Email ThisBlogThis!Share to TwitterShare to FacebookShare to Pinterest
Labels: Twins

In 1972, Don about to enter his last season as a Phillie….often perceived as Phillies prospect but was actually signed by the Pirates…did a three year stint in the Bucs farm system…Traded to Phils organization for 1968 season…Spent year in San Diego AAA PCL club…Broken in the big club for 1969 as part of a youth movement…Played regularly but struggled at the plate hitting .229…Sophomore season was huge improvement representing career high BA…Improvement was attributed to choking up on the bat…Also moved to third that year to make way for Larry Bowa…  Mostly remained at 3rd for the remainder of career…Unfortunately BA suffered in 1971 and 1972…The trade to Brewers made him a mainstay in the infield for next 10 years…Lead AL in double plays and putouts at third….Was a four time Milwaukee all star representative…Played in Brewtown for 11 years, hitting .270 for the club…A line drive hitter but in 1977 hit 25 home runs and drove in 83 runs for career bests…Remains in the Brewer top ten of career At Bats, runs scored, total bases and doubles. 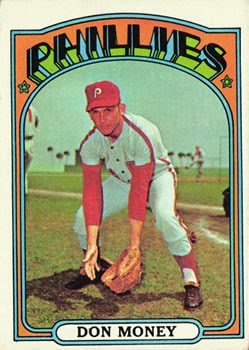 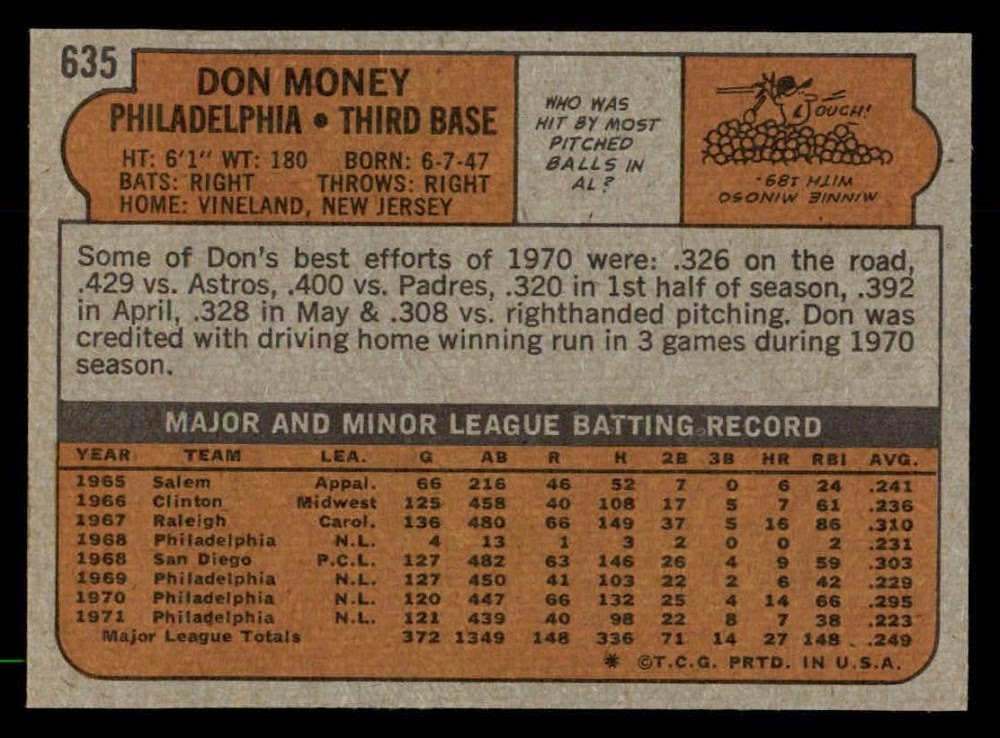 Posted by Douglas at 7:17 PM No comments:

An effective pitcher but more known for off the field persona….subject of a song by singer Warren Zevon..
You're supposed to sit on your ass
And nod at stupid things man, that's hard to do
And if you don't they'll screw you
And if you do, they'll screw you, too
And when I'm standing in the middle
Of the diamond all alone
I always play to win
When it comes to skin and bone
And sometimes I say things
I shouldn't, like
And sometimes I say things
I shouldn't, like


Not sure where it is about Bill but it does speak to his outspokenness...Yes there are web sites dedicated to his quotes…now about the pitcher…product of University of Southern California Baseball empire…Drafted by the red sox and made his name there…A gradual start to career splitting time between minor and the Fenway Park Bench….Impact year was 1971with a 9-2 win loss and 2.71 ERA in a mostly long reliever role….Turned to a starter for 1973 and responded with 17 wins…repeated the same number of wins in next two years….Hit a wall in 1976 with a very poor start, follow by shoulder injury in on field mele against NYY which took him out for 6 weeks…Rest of his  time in Boston was on the comeback trail….1978 was last season in Beantown went 10-10….Traded to Montreal for light hitting Stan Papi for 1979….Did not go over well with Bill….nevertheless almost matched his best years as a Red Sox with 16-10 mark…could not follow up however winning only more 9 games in 2 ¼ years….Lee's adventures in Montreal are chronicled in the book Up, Up and Away by Jonah Keri…. Life story is being considered for a biopic with the right owned by Woody Harrelson. 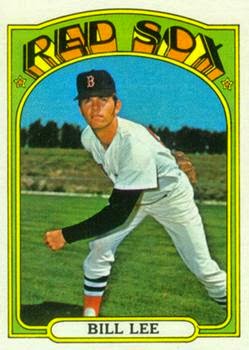 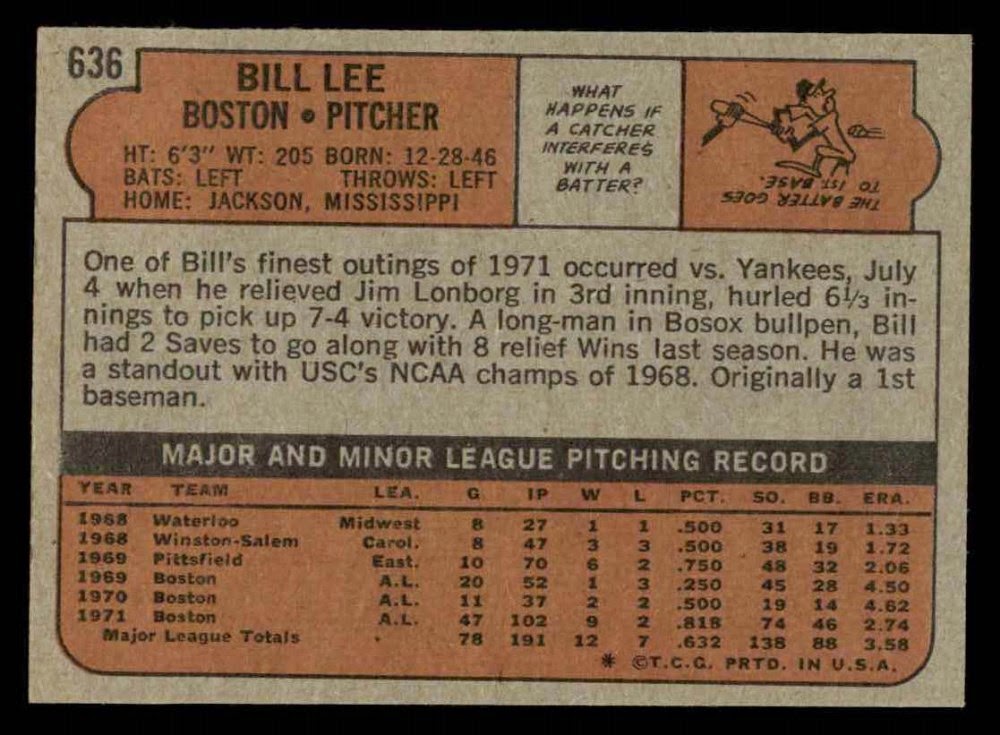 No envy of peers here…a man with a impossible mission …Respectability for an expansion franchise….Hired by Padres GM Buzzie Bavasi for the team’s inaugural years… Buzzie and Preson went back to 1960 when Present was the manager at Spokane, one of the Dodger’s two AAA farm teams at the time…A year prior, 1959 the native Cuban, Preston managed the Havana Sugar King to the Little World Series (AAA) Championship…The championship series was less about baseball and more about intimidation and political turmoil of Fidel Castro’s led revolution… the opposition, the Gene Mauch led Minneapolis Millers, were by all accounts just happy to escape without injury…Most likely the highlight of managerial career… Gomez’s journey continued with the Dodger’s organization with a short detour to NYY AAA Richmond…1965 Gomez returns as Dodger coach until his Padres debut…First year Padres were brutal, going 52-110…Padres improved by 11 games in 1970 based on big power numbers…1971 brought on a virtual stalemate in progress going 62-100…a mediocre start in 1972 brought on his dismissal…Resurfaced with Houston in 1973 had his best MLB season going 81-81…miserable Astro squad in 1975 resulted in being let go near the end of the season…Last managerial job was with the Cubs starting the 1980 campaign…replaced on July 23 after 38-52 record….Passed away in 2009 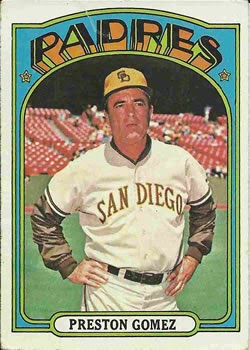 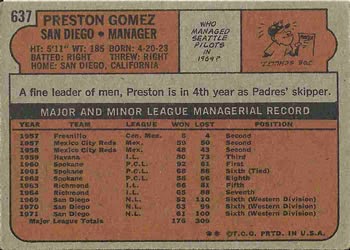