Career summed in one word:  "Ouch"….or some used “scrappy”…..anything for the team guy….proficient at being plunked…..In 1971 a sensation, an incredible number HBP (50)....this was significantly larger than his peers at the time and anyone else in the modern ball era…..in statistical regards a historical season….not an anomaly, three years prior and three years after led the NL in being the hit batsman giving him seven consecutive years….6th on all time list with 243….developed in the Milwaukee Braves system….1963 was plucked by the fledgling NY Mets in a cash deal….was able to bypass AAA  ball for a starting position in the Met infield….established himself as a solid hitter and a ray of light in the woeful sophmore squad….was #2 in ROY, following year an All Star terminating with .303 BA….made All star team 1966 to offset an injury ridden 1965…..nevertheless traded to LA Dodgers and the flipped a year later up the coast to the Giants for a 3 year residency…..started his HBP legacy along with consistent offensive figures….traded to Expos for minor league journeyman Dave McDonald….a steal….held second base until 1974….moved to 3rd base for his last year of playing ball….his four years in Montreal yielded with a .277 BA…..put on waiver late in year….picked up by the Cardinals to top off the season and his baseball career….As a Red Bird had 4 hits in 28 plate appearances….plus was hit by two pitches…..Motto was  “Some people give their bodies to science; I give mine to baseball. 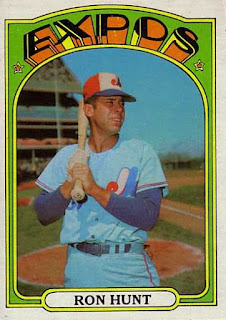 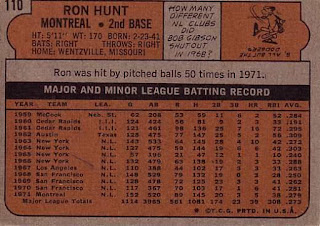 AKA Mudcat….Long time mound veteran….entitled into a set up/closer role for his last three seasons….minor league win tallies included 21, 19, and 18 falling in a four year span….. MLB stamp date is 1958 in Cleveland…. long time starter showed glimpses of brilliance but between military commitments, run ins with coaches/management, and wavering assignments which stunted his progress….Found resurgence in being traded mid season to the Twin….resurrected a lost season….took game to the next level in 1965…..possibly aided by the controversial, outspoken pitching coach Johnny Sain….dominated the AL with 21 wins and a league best win %....added to his standout year was two victories in the World Series….hit a 3 run home run to help his cause to boot in game 6…..an encore was elusive and in a matter of a few years found himself a proverbial rolling stone in LA, Montreal,  St. Louis….was brought aboard the Oakland A’s for 1970…..took over bullpen while other mainstays Rollie Fingers and Diego Seugi were tried out in starting roles….Collected 24 saves in 72 games good for 5th and 2nd in AL respectively….in an unusual move traded to the Pirates with 2 ½ weeks left in the season....added eight more appearances as a Buccaneer to bring his seasonal total to 80 which was best in  the majors….contributed to the Pirates holding on to gain the NL East title….Retained  for 1971, Grant becomes the sidekick to Dave Guisti’s closer role….garnered 7 saves…..in an inverse of 1970 is purchased back to the Oakland A’s to support their successful playoff efforts…..tallied 3 saves to bring his two team total to 10 to compliment sub 2.00 ERA….While thwarted  in a return to the WS, did make a fair show in ALCS with two shutout innings….turned out to be his exit from MLB stage….despite strong season was released….tried out with Indians in spring training but  wound up signed to a contract with the AAA Iowa Oaks an A’s affiliate ….at age 36, was 11 years older than the average age of his peers…  Not call up which is surprising given the A’s aptness to import veterans nearing the conclusion of league competition…..while several great chances never won a World Series…most of his post baseball work has been to advocate for greater participation of African Americans in baseball. 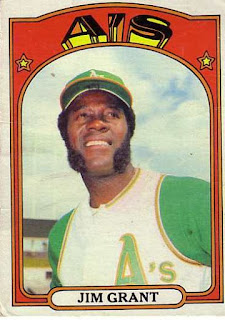 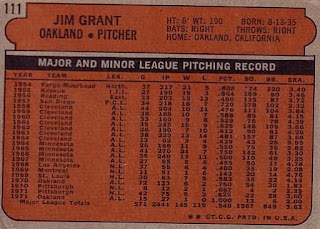 I have friend, his name is Dan….he is great golfer but he was also a decent high school pitcher in the Chicagoland area circa 1968….in his high school career faced several eventual big leaguers but said the longest home run he ever gave up was a moon shot by Greg Luzinski…..Dan thinks the ball still traveling to this day…..in high school word of his exploits must have reached the Philly brass….selected in 1st round in 1968 draft…tore up minors….. repertoire strength; clouted 307 ding dongs starting 1971 to 1984….balanced out his power by hitting over .300 three times….never led a circuit in homers but five times in the top five….. Part of a Phillie youth movement that imported new blood either through trades or draft prospects…..the hits were Luzinski, Bowa, Schmidt, Carlton…..misses were Joe Lis, Roger Freed, Mike Anderson, Pete Koegel, Denny Doyle…swung the bat like a toothpick….Groomed as the 1st baseman of the future but with Deron Johnson being withdrawn from 3rd to 1st it was felt Luzinski could handle left field….was not known for his outfield fielding (well not in a positive way at least)…. played only a handful of times at first for the rest of his career  but Phillies did change from pretenders to contenders in the later 70’s….his prime years were 1975 to 1978 adorned all star laurels in each passing year….he averaged 109 RBI per season in that time….however after two seasons of diminishing returns, Luzinski and Philly part ways after the 1980 season…..Purchased by the hometown Chicago White Sox, looking for a tailor made DH….The native delivered over the next three years, the pinnacle being an AL playoff berth in 1983…..a reprise of previous year’s achievement did not materialize in 1984 for neither the Chisox nor Greg…..Numbers dwindling as it was his last season….. Considered other offers for 1985 but all indicators led to believe his future would be relegated to pinch hitting roles only….Uncompromising retired to coaching and investments…. In 1989 was inducted into the Polish American Sport Hall of Fame. 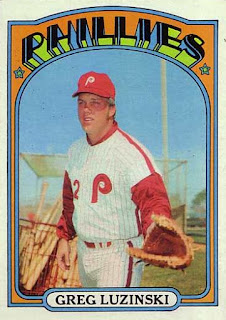 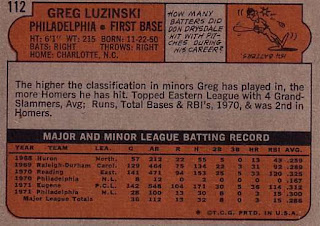 Incredibly slender Red Sox standing at 6’4” and 170 pounds….an even mix of starter or reliever….established himself as neither but was able to pull off two sparkling campaigns….After splitting several seasons between the minor and limited MLB employment, wowed the baseball world with a 13-2 record in 1973….one more decision would have taken league best win % honors……after a mediocre 1974 bounced back with 14-3 record in 1975 helping the Bostonians to a WS showdown...Despite his solid Red Sox resume standing to date at 3.43 ERA and 41 wins out 59 decision was traded to Braves….Red Sox’s sudden reluctance to continue with Roger may have been due to an auto accident…..Moret was unhurt but had great difficulty explaining the incident….Moret’s year with Atlanta was a second rate endeavor and ventured off to Texas for 1977….His only full year in Texas brought a lowered his ERA but his career was at an impasse….Next season his career was virtually stopped by an episode of mental illness….found in a reported catatonic state in the club house before a game in early 1978….was hospitalized for a short period….resurfaced for a few limited appearances but was shelled in his last start….set aside for the rest of the season….Released spring of next year….tried out with Cleveland and Texas again but did not get farther than spring training in subsequent years….a couple seasons later tried a short turns in the Mexican with varying accomplishments…..moved back to native Puerto Rico….little is known about his post baseball activities other than he passed away in late 2020. 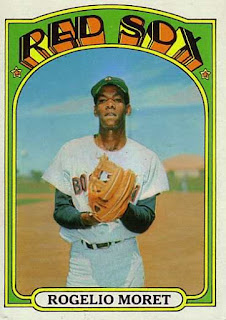 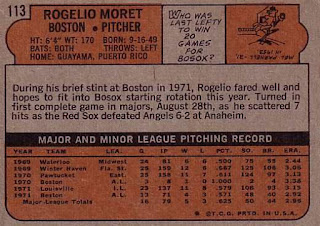 “Avatar of the significance of one moment"….Part of the amazing era of Dodger player development….Brilliant climb up the farm system many times under the tutelage of Tommy Lasorda…. Once with the big club, started out as either an outfielder or platoon 1st baseman sharing duties with Wes Parker….Attributes of grit, hustle,  team chemistry, and mind over pain were put to use…. exceptional speed could be included in his first couple of years but ankle  injuries hobbled him after 1976….Never the same and needed to permanently move to 1st base….problem was the emergence of  ironman Steve Garvey.....this necessitated his departure to Chicago…..managed his pain with stretching exercises practiced by ballet dancers and yoga, ahead of his time….oh so difficult to strike out….1980 NL batting Champion…..Appeared in 8 seasons in Dodger blue, 8 in Cubs threads, in that time span batted over .300 8 times…..only appeared in two postseasons;  1974 with Dodgers and the infamous 1986 Red Sox…..departed teams just prior to playoff runs traded to Cubs just prior to 1977, shipped to Red Sox mid season from Cubs 1984….Two proficient seasons  in Beantown collecting over 100 RBIs in each…. his solid performer was been reduced to one play in the 1986 WS...ridded, taunted by opposition fans all due to the slow, run of the mill roller hit by Mookie Wilson in game 6 …..in fairness the Red Sox wheels were falling off before the incident….Buckner returns to the Red Sox in a somewhat alienated state was gradually nearing his career terminus….his 2 home runs, 42 RBIs and .273 BA at mid season 1987 failed to be the robust numbers put up in the past two years…at this point released and picked up by the Angels and next year to KC as an extreme backup role… by virtue of one at bat in 1969 and his short stint for the Red Sox in 1990 played in 4 decades…..for all his hits 2715 only made all star team once….more would have been were not for the injuries…..Well liked wherever he played….Contracted dementia and passed in May 2019 but had made his peace with the Boston faithful and all his other would be critics. 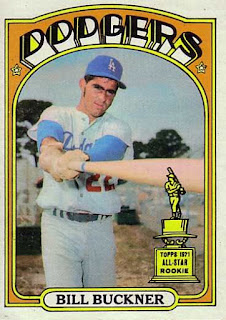