Let’s face first year expansion teams are generally bad…1969 was no exception, and every bad team has the disproportional loser…San Diego had Clay Kirby 7-20 W-L record…Pilots had John Gelnar and Mike Marshall both with 3-10 records… the sacrificial lamb for the KC Royals was Jim Rooker…Rooker  toiled as a rookie for the first year Royals with 4-16 record…Rooker, like Marshall, came from the pitching rich Tigers farm system in the 1960’s…Jim faced three more inconsistent seasons for KC including a send down to AAA Omaha two consecutive years…Then a Pirate trade appeared over horizon…exchanged for then rookie Gene Garber…Revitalized his career....After a season as a spot starter and reliever Rooker was able to work his way in the Bucs rotation in 1974….not always pretty but was consistent winner for five season finishing his Pirates career with 82 wins 65 losses…Was known as a good hitter for a pitcher…. able to keep his career average over .200. 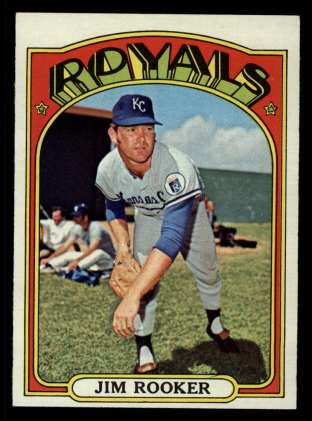 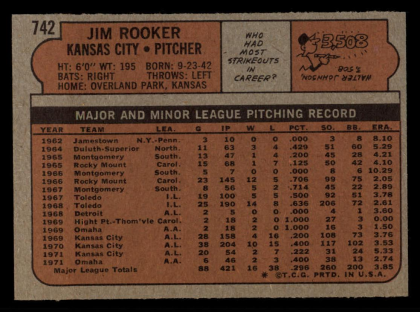 Posted by Douglas at 8:51 AM No comments:

Seemingly everybody has a claim to fame or a mystery…maybe for a day...As a Tiger, Cesar's claim to fame was going 7 for 7 with six singles and one double…June21, 1970 second half of a twin bill with Cleveland…Raised his BA by 31 points to .243…In 1970 it took 96 at bats and three seasons to get first RBI…next season was bounced by Ed Brinkman was sold to Montreal… A beneficiary of the 1969 expansion… was stuck as a San Francisco farmhand (much like minor league teammate Gil Garrido)…he was traded to the Tigers to settle their shortstop position then positioned by a aging Tom Tresh and reluctant Mikey Stanley…Cesar had  no home runs in 800 AB…Never played for Expos…may have never appeared in a Expo uniform as evidenced by the not very well covered up Detroit uniform on this card...in some high number cases photo were taken from 1972 spring training…played a few games in Montreal Pennisula AAA club but mostly finished up in Padres farm system in 1972. 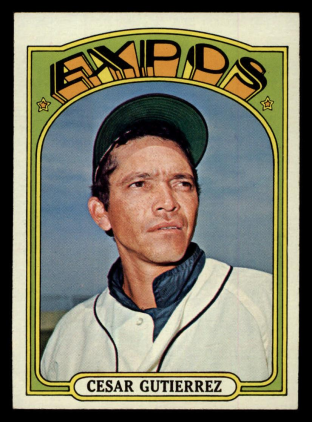 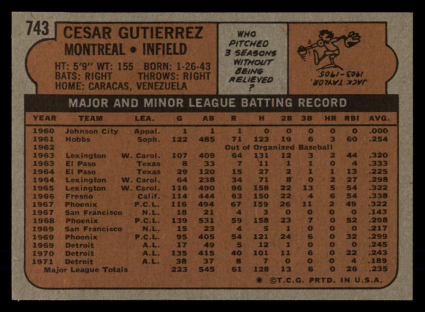 Depicted : a young 21 year old rookie who would set and to this day continues to hold several Brewer pitching team records…Holds the mark for wins 114, Inning Pitched, games started…with no one nearing the marks (thanks free agency and a small market)…Jim did it with quiet consistency and longevity mostly on Brewers teams that found wins difficult to come by…He lead in Brewer losses by 31 games but even that status is a testimony to his longevity…. Came to the Brew Crew in total obscurity having pitched in only two games in the Class A Midwest league the year before…Won his debut dealing 6 shutout innings against the pale hose…Finished a 10-8 record….1972 was rougher turning in 1-6 record and being sent to the minors (he did pitch well at AAA Evansville, whose stadium in depicted below in 1983)…bounced back nicely in 1973 and the following four years wining won 10 or more games…also lost more games than he won in each of those years….Best season came after he dealt to Tigers for Ben Ogilvie…17 wins in 1978…Next season, Jim returns to Milwaukee via free agency and pitches five more years...sweet arrangement for the Brewer because Ogilive stays with the team until the mid eighties…Finishes with time with Angels and Tigers again…nice shot of the original Brewer blues with a strong similarity to the Seatle Pilots design....Only a one time all star. 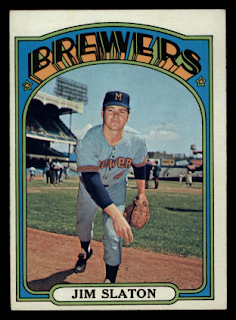 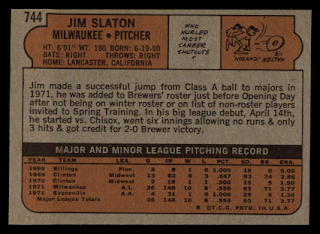 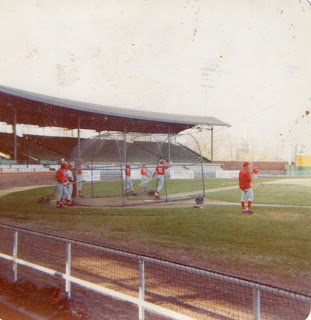 I confess I never was very good at knowing and recognizing some national league regulars… growing up in Minnesota I knew American Leagues players pretty well after 1970…. a time before published rosters or prognostication books I eventually collected… Two players who toiled in my personal obscurity were Vada Pinson and Julian Javier (until late 1970 until I got their baseball cards…last name pronounced hoo-lee-ON ah-vee-AIR...Javier was the primary  regular 2nd baseman for the Cards for the 60’s...good fielding range but sometimes lead the NL in errors....offensive skills were steady but unspectacular...about average for a regular at the time…hit .346 combined in back to back WS in 1967 and 68…In 1971 his playing time was cut down  by the arrival of Ted Sizemore…Javier was expendable hence he was dealt to the Reds who used him sparingly in 1972 for Tony Cloninger…He was able to appear in 4 WS games that year…was released soon afterwards. 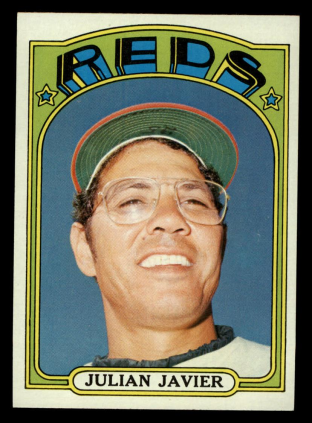 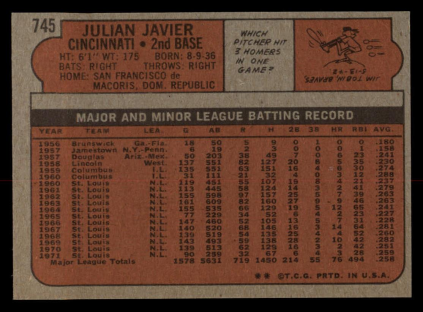 A card blog favorite….So many titles it boggles the mind…."Call me shades"…"Joe Cool"…"Smooth Operator"…Legendary for the dark shades he wore in 1969 and 1970 while with the Phillies …not for his pitching…Changes to a more tinted specs for Chisox spring training as seen below… Apparently the glasses were used for glare and were even used at night…After spring training was sent to the Sox AAA club in Tucson and never played for the southside hitmen…Spent time with Cleveland and St Louis the year of 1972…Strikeout artist led  American Association in Ks in 1973….Was wild too  led the same league in walks…Based on his 1973 number reentered the show with San Diego in 1974 and got the last two wins of career (bringing his total to 5)…Amazingly was 3rd in HBP that year in only 73 innings pitched….must be the shades…played senior league circuit in late 80’s….In 1975 played for hometown Sacramento Solons in a football stadium with 250 foot left porch…the LA coliseum-like configuration resulted ballooned power numbers and astronomical ERA’s…Palmer’s 5.91 ERA was just barely above the team average of 5.71…Oddly enough it was reported he tried out for football at Sacramento State College…Rookie card was considered coolest of all time by ESPN magazine.in 2008 (so it was the shades) and is #19 in the Bleacher Report "most ridiculous" card…Interestingly he was traded for Mike Kekich who was so revered for another trade; off the fireld…so much said for so little done on the field. 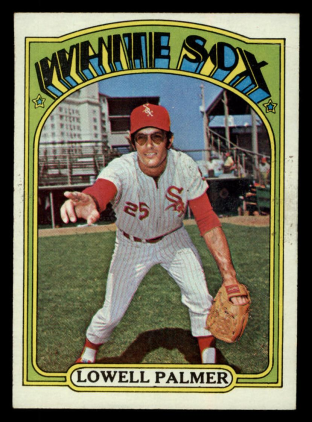 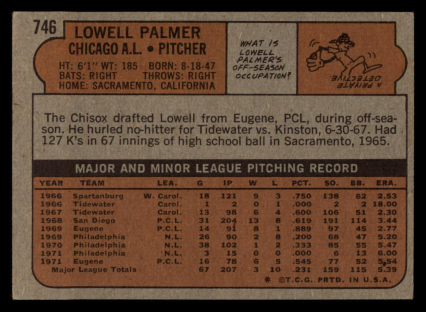 In the world of utility players…This guy was consistently described as Infielder-Outfielder in four out seven cards in his career….Full body photograph was rare for position players…Started in Cubs system and was a regular in 1964 but could not stick to regular duty…Spent all of 1968 in the minors which made him eligible for rule 5 draft…Offensive numbers in Hawaii were mediocore Probably benefited from the increased demand for player by the 1969 expansion...Picked by Cincy who in turn was required to keep him for the season…responded by hitting .253 which kept him in the bigs for next several years… the only time he was acquired by trade was in Joe Morgan blockbuster..Jim did play every position but pitcher. 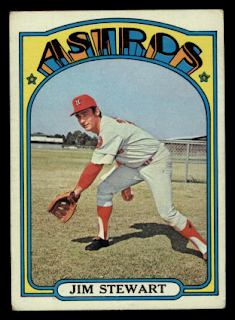 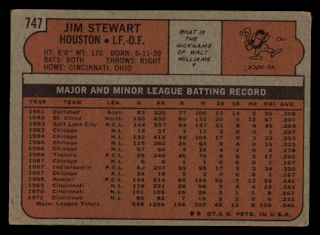