Most often spelled with an “ie” than “y”....late comer to MLB debut at age 26....Just a year before, Kentucky native was content with weekend semi-pro ball.... actually lied about his age by three years when signed with Pirates...got away with it and after a short minor stint made Pirates starting roster 1966....Solid rookie season at 12-9....Sophomore slump with 3 wins 1967...Trade to Philly resulted in a rebound and possibly his best full season as a starter (also came clean about his age)...three more years in City of Brotherly Love yielded 12, 8, and 11 wins respectively....Started 1972 as did most Phillies hurlers (except for one Steve Carlton) mightily struggling...With a 4-10 record was put on the waiver wire...scooped by Detroit...On a contender, Instant turnaround, with 10 wins, 3 losses, supercharging the Tiger’s to the AL East crown, breaking the Oriole’s stranglehold on the pennant....Subsequently did not repeat his terrific half season...eventually landed Montreal...had a decent 13-13 record in 1977 and named to the All Star team for a second time....took detours to Reds, Cubs, before becoming the prodigal Expo in 1978....on reinstated in Quebec started a new role, closer at age 39....Top Expo relief man 1980-81....turn over closer reigns to Jeff Reardon in 1982 but firmly as #2 man...Ran out of steam 1983 at age 43 and retired....died 2011 and was declared “Kentucky Gentleman” by the General Assembly of the Commonwealth of Kentucky, 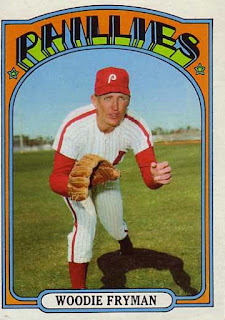 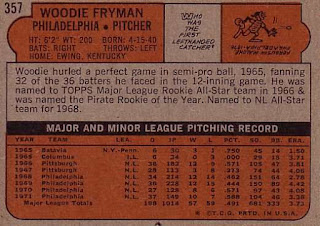 Posted by Douglas at 6:41 AM No comments:

Seemingly came out of nowhere to helm the first edition of the big Red Machine...Start of long standing relationship with the Queen City.... then up north up I-75 to the Motor City....MLB managing career spanned 26 season winning record in both towns....As a player, unusual....one year for Phillies appearing in all but two games...hit .218 sent to AAA and never called up again....spent remaining playing years a fixture in the AAA Toronto Maple Leafs...asked to manage 1964...even though he won, concerns were expressed over his temper and let go, found himself scrambling for skipper positions....enter St Louis farm system; Sparky learns temperament ...came in handy for the coaching the first year Padres 1969....for 1970 was hired by the Angels, as a coach;  for a few days when the Reds came a knocking with the top spot....Legendary run; took the Reds to two WS wins and five post season contests....Controversial front office move was let go after 1978 season two seasons removed from one of the most domineering WS wins ever....picked up by Detroit 56 games into the 1979 season...only one post season appearance in Tiger town but made the most of it; rolled up the competition and Padres in the World Series....managed to the 1995 season....passed away 2010...known as a nice man, jovial and friendly despite a sometimes aloof appearance. 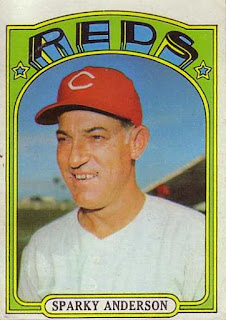 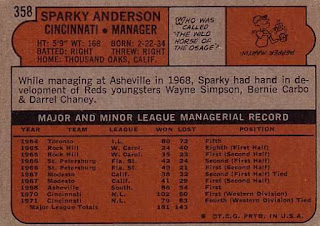 Pronounce pav-LET-ic....A Milwaukee native, reserve backstop by trade, sounds a bit one Bob Uecker....acquired for 1972 to help out his hometown team... except he didn’t play in Brewcity.....Cincinnati debut in 50’s resulted in only  one at bat....started getting MLB time 1962......In his prime Don was one of the better reserves catchers in the NL....put together .300 BA over two seasons backing up Johnny Edwards 1965-66 as a member of the Reds...rest of his time was more inconsistent....barely played during his two year in Red Sox uniform circa 1970-71....given his career, it would have interesting if he ever would have been given a regular working schedule. 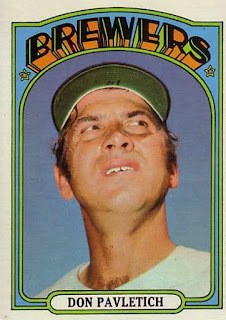 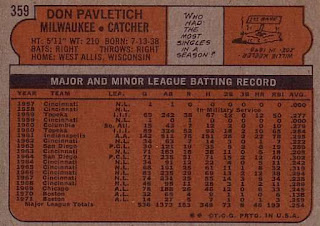 What does a three year fledgling expansion franchise do with the best lefty in the league circa 1971?...trade him off of course....Roberts put together his career year in 1971 with an excellent 2.10 ERA good for second .... was picked 39th in the expansion draft..... Roberts had come a long way from being a Phi-Pit farmhand by leading the IL in wins 1968 (note top 5 league winners were all on expansion rosters)....got better despite persistent non support by Padres...Case in point his 1971 record 13-17....trade to Houston brought him to an established club...note to Padres there was another Astro second baseman on the market; Joe Morgan...Spent 4 years in Houston with his best output being a 17-8 campaign 1973...After a couple of down years as an Astros, his acquisition by Detroit resulted in 16-17 season in 1976....achievement overshadowed Mark Fidrych’s one seaon wonder year.... stuck around for four more but relegated to the typical retread fill in role.... three of those years  Dave changed clubs mid season....Finished up 1981....Ironic fact; In 1972 Padres draft third baseman Dave Roberts and instantaneously assign him to a regular spot on the big club...no relation however. 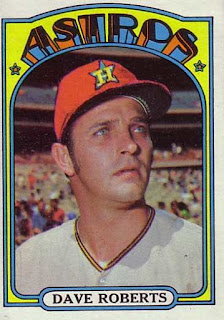 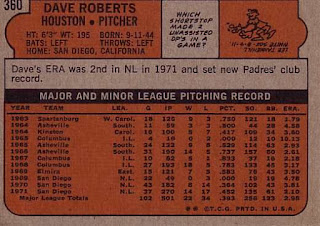 Posted by Douglas at 2:14 AM No comments:

Above average 2nd baseman for 5 of 8 seasons...Rookie year of 1967 he was a contributor to the team’s road to the WS hitting .253...no votes for ROY....improved his hitting stats in 1968 when most of the league batsmen regressed in the year of the pitcher....around this time Andrews got involved with a Boston charitable organization “Jimmy’s Fund” for cancer research....numbers improved in 1969 hitting eight points short of .300...Average dropped to .253 in 1970 but Mike was able to improve power and RBIs figures.....Nevertheless traded to woeful Sox team in Chicago...Hit .282 in an admirable comeback....As in 1967, Mike’s new team made vast improvement from previous season....Andrews faltered in 1972 hitting a weak .220....Things didn’t get better in 1973 and Mike lost the starters spot to Jorge Orta....enter the bizarre ending of his career...sent to Oakland for their playoff run....made the post season roster....made two errors in game 2 prompting Charlie Finley to strong arm Mike into stating he injured so Rookie Manny Trillo could be called up....The stunt made headlines and Baseball Commissioner intervened and Andrews was reinstated to the roster....Finish from there on....had a brother, Rob play for Astros and Giants....for many years was  Chairman of the Jimmy Fund. 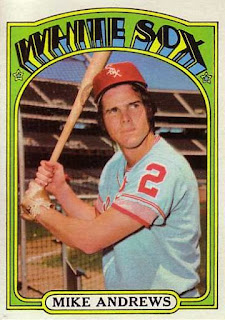 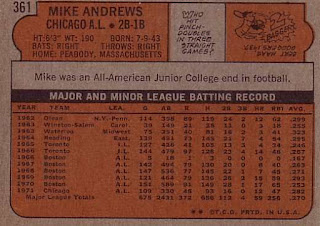 Storied but relatively young franchise known  for the amazing and improbable 1969 championship run and their growing pains....A team born out for two reasons;  to be an NL replacement in Gotham City;  and an attempt to circumvent a proposed 3rd major circuit the Continental  League....In hastened expansion, the quality of players for draft was exceptionally poor....As a result first year Mets lost 120 games, a modern day watermark for futility....next four out of five seasons resulted in 100 loss seasons...first ray of hope came in 1967 with debut of Tom Seaver (team still lost 100)...next year enter Jerry Koosman and team ERA drops by a run per game....1969 Mets astounds the baseball with a 27 game in improvement....Took the first NL division series and overcame huge odds against the favored Baltimore Orioles...Subsequent years Mets virtually repeated above .500 seasons one after another...a scrappy 1973 team was able to return to WS only to lose to Oakland....team fortunes declined over the next 10 years....a mid to late 80’s resurgence culminated with second WS win and a franchise high 108 wins in 1986....in past 30 years two return trips to WS but no crown.....Records: needless to say in the year 1972 this team was only starting to feel first division status and their hitting lagged behind pitching....eventually with better teams came more regular starters...add free agency and the NYC deep pockets;  superstars become available...hence all backside batting records have been broken many times over...Near opposite is found with pitching records buoyed by Tom Seaver’s glory years of 1969-1971...Tom Terrrific still hold team marks for wins, complete games, Innings, strikeouts....Tom’s ERA and win % marks has only been beaten by Dwight Gooden and David Cone...less esteemed records held by Roger Craig (losses, hits) and Nolan Ryan (walks) are intact. 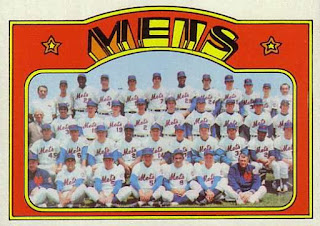 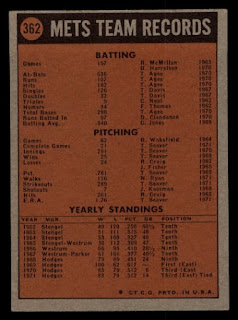 Posted by Douglas at 5:49 AM No comments:

Career can be summed up as 1970...only time he stayed in the big for a full season going 8-7 with an 2.65 ERA....making the big club was logical for he was 1969 ERA champion and tied for the International League lead in wins with 15.....traded to Oakland where he was caught up in numbers games in the plethora of releivers...passable 2-2 record with 3.5038 ERA....nevertheless released and landed back with the Yankees...no such luck repeating 1970 numbers...0-3 record and 4.02 in last MLB season....passed away 2009 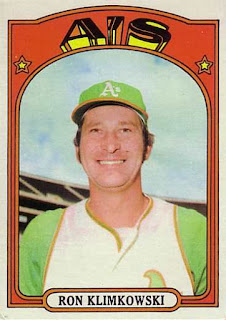 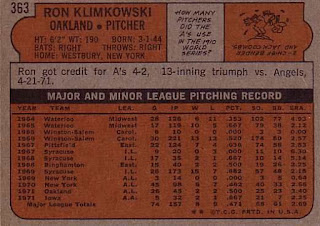 Posted by Douglas at 6:39 PM No comments:

A good player whose prime was two to four  years in the early to mid sixties....however was given such advance billing of superstardom his career is a bit a disappointment....Spearheaded the infamous 1964 Phillies pennant drive... hit bit below average during the team’s infamous swoon hit 3 homers one day against Milwaukee in a losing effort....became average player after his prime as the Phillies sank back into mediocrity ...took his bat to Chicago Cub where he became a regular working fill in 1970 a letdown in 1971....acquisitions of Rick Monday and Jose Cardanel prompted a trade to Yankees...Career moment was  hitting a 3 run home to win the All Star game....swan song came as a reserve outfielder with the Yankees 1972-73. 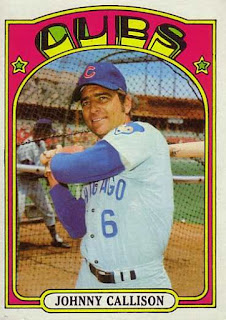 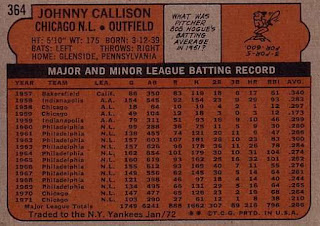 The omega and alpha during the Senators transition to Ranger era...started the last Senator game and first Rangers game....for several years best hurler in a mediocre lot....after one full and two partial also ran seasons provided little results 7-16, arrived Manager Ted Williams.....under him his star blossomed most brightly in 1969 when he was AL ERA champion....Next season Senator’s resurgence halted but Dick collected 16 wins and 12 losses....record was inversed 1971 the Nats last year....Followed the caravan to Arlington Texas....held his own on a bad team....slow start in 1973 prompted mid season trade to Cleveland....having survived the ordeal but together enough to get a slight winning record and a no-hitter against the A’s...impressive so much that A’s acquired him the next year....put together 11-5 record in 1975 as his last notable season. 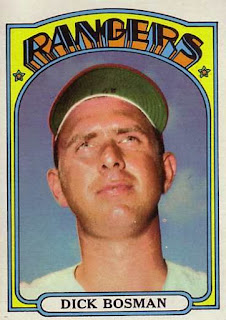 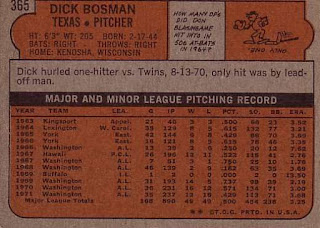