A valued reserve catcher on the WS champs….good bat with some pop….career .267 hitter over 15 years…Son of MLB player Pinky May….Stayed up the big club 1971, Milt replaces Jerry May (no relation) as 2nd backstop....one of six men with the last name "May" to see action that year....in 1973, Pirates seeing trade value shipped Milt to Houston….Increased playing time by 2 fold from 1971....Travels then took him to Detroit, Chicago (AL) and San Francisco...had consistent results....Returned to Pirates for a few games, 1983-84.....best output of the bunch was 1981 hitting .310 in a strike shorten year....highlights in his career a game winning hit in game 4 of 1971 WS….low light might have been in the minors when after a particularly hot streak at the plate his father (then an opposing manager) ordered his pitcher to throw at him...interesting family….youthful looking chap in his playing days 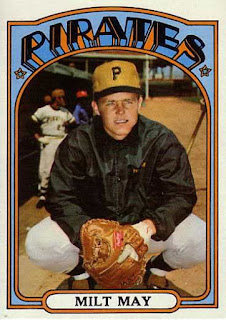 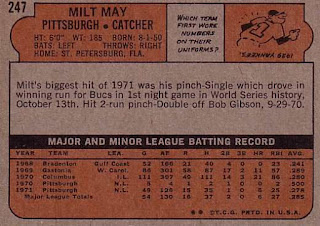 Email ThisBlogThis!Share to TwitterShare to FacebookShare to Pinterest
Labels: Milt May, Pirates

Bespectacled righty starter for the resurrected White Sox…Acquired at the behest of newly minted Sox skipper Chuck Tanner, who was Bradley’s AAA Hawaii Islander Manager in 1970….considered one of the best PCL teams of all time with 98-48 record….Bradley chips in with formidable 11-1 mark….while 1970 call up was so-so Bradley compiles a 17-6 overall record….Tanner’s faith is rewarded with 15 win season and Chisox make a 23 game improvement staving off destruction….Bradley performs a 15 win encore in 1972…. Seemingly in good standing on the south side it was not be…..Informed of a trade to San Francisco while he worked to sell White Sox season ticket packages….exchange for outfielder Ken Henderson and a young Steve Stone….(I’m really puzzled by this trade that took one of only three mainstay starters for team that already had several outfielders, what the White Sox needed were middle infielders)….Prized by the Giants who had suffered from aging and poor trades…Bradley pressed in a 13 win season 1973 as the Giants improved but ERA jumped to 3.90 as sign of thing to come….quickly lost effectiveness in subsequent seasons….last game was 1975. 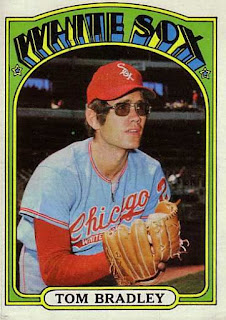 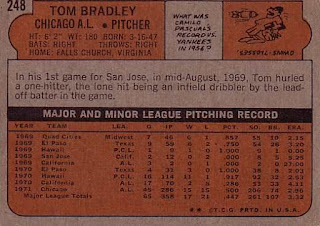 Many times a manager has history with the franchise….so goes Harry “the Hat” Walker….Took over Houston Astros managerial duties in mid 1968….Prior to was manager for the Texas League Houston Buffalos in the late ‘50’s….In the interim managed the Pirates to winning seasons but no pennant….as a player Harry was born in a baseball family….his father Dixie Sr. was pitcher in fledging years of the American League….Brother Dixie Jr. played during 30’s and 40’s….Dixie known as an outspoken opponent of Jackie Robinson inclusion to the Dodgers....nevertheless their forte was hitting, the only brothers combo to each win a batting title…..Harry won batting title in 1947 as started slow with St Louis but then caught fire with the Phillies hitting .371 for the rest of the season....As a manager, did well with Pittsburgh but the competition was heavy and failed to win a pennant.....More seriously Walker was at best old school and worst racially discriminatory…Alienated players and was a man behind the changing times of player enpowerment….Don Clendenon, having known Harry from Pittsburgh, refused to report to Houston when Montreal traded him…..Astro did reach .500 for first time in 1969…. Followed by two sub .500 seasons….Strangely fired after being 13 games over .500 in 1972…but given his controversy maybe not….after the pro game developed the infant baseball program at UAB…..passed away in 2006. 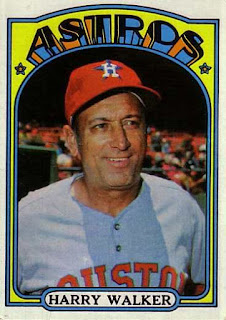 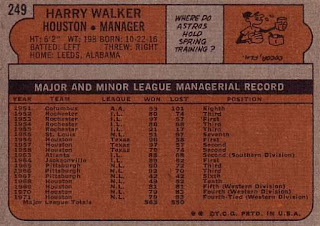 Unmistakable body profile…blonde hair plus rotund build at 6’ 4” 200lbs….but oh so much more….at the turnover of the decade was in elite company of Frank Howard, Reggie, and Harmon in power and run production… Younger than his two of those peers, Boog takes on big league pitching starting 1962…hits .240 in 400 at bats….improves the next two campaigns….drew kudos for 1964 when he hit 39 home runs, produced 99 RBIs, hit .290….runner up to Killebrew’s 49…..what transpires afterward are years of varying success; reprises his ‘64 numbers in ’66 yet other year represent fair but unspectacular numbers….Boog offensively bounces back in 1969…second in RBI’s again short of Killebrew with 121….Boog continues his hitting ways in 1970 with an all around performance that earned MVP honors…tPaired with Frank Robinson and flanked by Brooks Robinson and Paul Blair to form the nucleus of the Oriole run production….1971 follow up was marked by a slow start resulting in 50 point drop in BA….subsequent year show slight decline…..Orioles going with youth trade Boog to the Indians reuniting him with newly named skipper Frank Robinson….Boog responds with the best numbers in several years nearly reaching the .300 mark…took comeback player of year honors….especially merit worthy was his .297 BA representative of his prime years in Baltimore….played one more year in Cleveland and then one for the Dodgers….Interesting fact was step brother to Pirate/Royal Carl Taylor….multiple endeavors after playing….owned a marina…joined the Miller Lite “Tastes Great, Less Filling” crew….proudly associated with Baltimore opened Boog’s Corner Barbeque stand in right field stands of  Candem Yards. 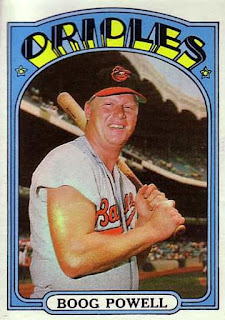 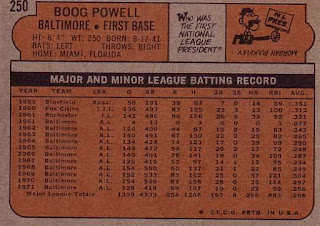 In summary these lower represent more established player not 4A guys on the fringe in higher numbers….The superstars listed are icons Roberto Clemente, and Hank Aaron….other HOFer's are Luis Aparcio, Jim Palmer, Jim Hunter, Gaylord Perry, Willie McCovey…HOF Manager Earl Weaver,…Guys who are still on the bubble for HOF consideration:  Tommy John, Dave Conception…. least deserving of a card:  Ron Cook doesn’t light my fire…the torch has passed Pete Hamm…Stars who descended fast at this point Frank Howard and Steve Blass….player with the best future it’s Conception with a tossup between Bobby Grich and Hal McRae, followed by Mickey Rivers. 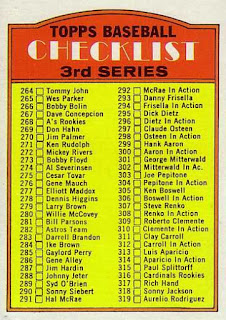 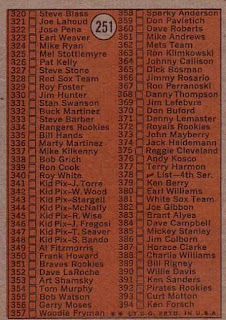 Email ThisBlogThis!Share to TwitterShare to FacebookShare to Pinterest
Labels: checklist

Lefty had heaps of work….but not a lot to show for it….one of multitude of young, home grown arms brought into the fray that was the Phillies staff….made company with Lowell Palmer, Billy Champion, Mac Scares, Barry Lersch of the time....in 1971 his 5-9 showing was non memorable effort but it shone brightly compared 1972’s 2-15 debacle….Despite the descending record ERA actually improved by ¼ a run per game…one of the forgotten other than Steve Carlton starters of the Phillie squad…was traded to the Twins after 1972….flipped to Milwaukee before 1973 began….spent a majority of his year in AAA Evansville…a top winner with 15 games, kept in contention for MLB return….was able to have two consecutive winning AAA campaigns but earned only one cup of coffee…last real MLB time was with San Diego 1976 appearing in 19 games.....Career highlight might been sharing 1971 Rookie Card with Archie Reynolds and Bob Reynolds. 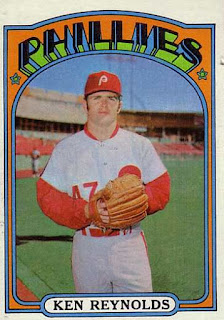 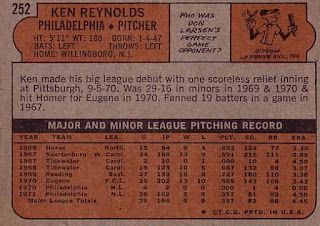 Good player, extensive career, but his sons garnered more fame…Catcher Sandy Jr was a multiple all star and Roberto was a great player with induction to the HOF…Sandy Sr. the first debuted in the early 60’s with the Braves….transferred quickly to the Mets (with a dubious 0-22 stint) then Chisox where he first able get semi-regular work….early in 1969 traded to Angels for fellow 2nd baseman Bobby Knoop…(interesting trade, Knoop was 30 years old and at the end of his career, Alomar was 25)….ironman for the next several seasons…hit consistently at .250-.260 mark (very good, for the pitching strong Angels)….made all star 1970… put in 648 consecutive games until a broken leg took him out in September 1973….lost regular gig to Denny Doyle but resurged in the remainder of season after a trade to Yankees…kept #1 2nd base status in 1975 but production declined…playing time in 1976 significantly cut with the introduction of Willie Randolph…acquired by Texas for 1977-78 who used him sparingly….has remained employed in baseball as roving instructor and third base coach. 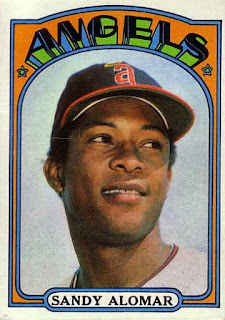 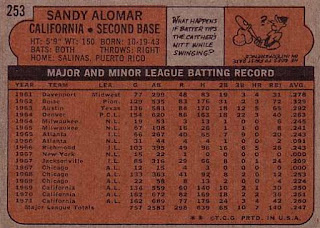 Its never a good sign when your baseball card shows you bunting….In addition  the name like Boots Day does not strike fear in the hearts of opposing pitchers…but in truth had a fair year as platoon player in 1971…career highs in production…but never progress more than than….played two and half more years in Montreal….Expos numbers were 8 home runs and respectable .258 BA…. formidable St Louis area high school pitcher….signed by Cardinals and made his MLB debut with the birds….irony got his first hit against the Expos when he was a Cub in 1970… traded to Montreal a few days later…. After his Montreal days, had a very long stint with the AAA Evansville Triplets.... not only a position player  but used his southpaw arm on the mound….Boots’ pitching line was 7-5 record in 87 games (plus 9 starts) and 4.33 ERA over 6 years….real name Charles Fredrick…was named Boots by a older sister when he was a baby…Returned to Evansville as a manager 1995. 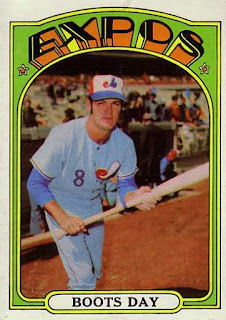 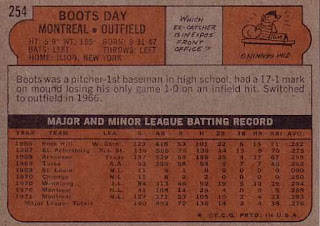 Essentially two careers….a rapid rise to stardom then demotion and tapered comeback….the centerpiece of the 1967 revival of the Boston Red Sox….Odyssey starts in 1965 and makes Red Sox roster…that year’s edition lost 100 games and he 17, but his presence represented youth coming out of the shadows of Ted Williams….improved to 10-10 in 1966…Jim and his surprising Bosox team jumped out of gate in 1967 to take the AL crown…earned 22 wins and Cy Young…held his own with a 2-1 WS record as the Red Sox fell to the Cardinals….all looked great until a ski accident in the off season…ligament damage surgery delayed 1968 start but faced further shoulder issues when pitching motion changed…end result was a frightful trial resulting in just 27 wins over the next four years including two demotions to the minors…his 10-7 record in 1971 did show promise…trade to Milwaukee for 1972 provided him with work and a higher pecking order in the rotation…responded with 14 wins…Nevertheless Milwaukee looking to steady their infield flipped Longborg to Philly at the conclusion of the season….Longborg stayed with Phillies for rest of career highlight being 17 and 18 win efforts in 1974 and 1976 respectively…playing days ended in 1979 but Longborg showing a strong adherence to continuing education eventually becoming a dentist in New England after playing days were over…still involved with Red Sox chairities….fun fact childhood friend of pitcher/outfielder Mel Queen and married Mel’s sister. 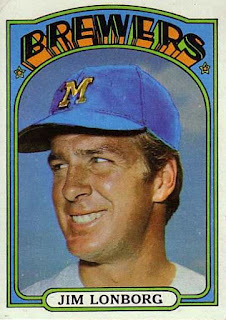 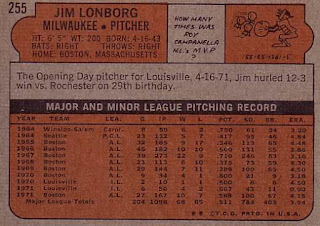