Slightly built Giant farmhand who had a fair number of at bats for the big club 1971....hit .224, no home runs, 13 RBIs.....mostly a PCL fixture...stationed at the Giant’s Phoenix club from 1968 to 1974....line drive hitter little power...picked up by the Brewers organization 1975 and earned a brief call up next year....most notable achievement was doubling his AAA season home run total...aided by playing in bandbox converted football stadium....also played in Japan and Mexico after the US. 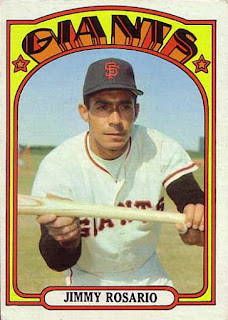 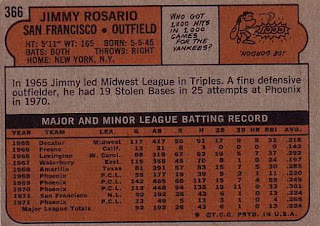 Posted by Douglas at 2:48 AM No comments:

#367 Ron Perranoski  Fallen closer circa 1971....top AL fireman for the previous two years for Twins... picked on waivers by Tigers and provided a minuscule redemption....Perranoski’s resume harkens back to L.A. Coliseum days Dodgers....the lefty fast took over the #1 bullpen spot by end of 1961...accolades followed most games 1962, best win pct and most appearences 1963....remained L.A. for several more seasons...took the trail to the upper midwest 1968....Did best work 1969-70 garnering 34 saves in the later year; an AL mark at the time....Achilles heel was playoffs where he did poorly.....may have been overworked by the regular season..... subsequent career careened downward;  1972 being a repeat of 1971...poor start with slight improvement after being released this time back to the Dodgers...joined coaching and positions in scouting and development for Dodgers and Giants after playing...as of  this writing is ranked 5th in Dodger saves....inductee in the Polish American Sports Hall of Fame 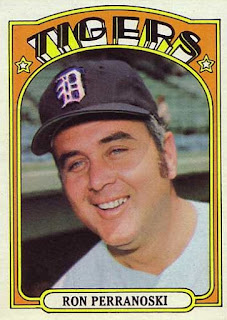 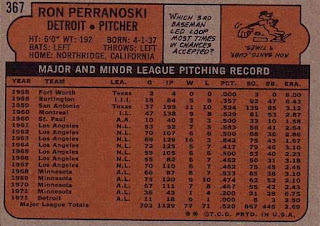 Posted by Douglas at 5:50 AM No comments:

Email ThisBlogThis!Share to TwitterShare to FacebookShare to Pinterest
Labels: fireman of the year, Ron Perranoski, Tigers

There’s a sadness upon viewing the card.... Tragic figure in baseball....Dead at age 29 after playing  for Minnesota and Texas....Trust on the spot light 1970 expected to fill the void left by Rod Carew’s mid season injury....big shoes to fill....hit .219 but Twins made playoffs....Used sparingly in 1971...learning the infield paid off in 1972....took over for a vacated Leo Cardinez 1972...responded with a fine season hitting .278 best mark for AL shortstops....then the devastating diagnosis of Leukemia just before spring training 1973...carried on as a semi-regular, sharing duties with Jerry Terrell, Sergio Ferrar, Luis Gomez....after two so-so seasons rebounded to bring average up to .270 in 1975.... died on Dec 10, 1976, two months and eight days after his last at bat...for the past 40 years there is a Golf Tournament in his honor held in Idaho initially hosted by friend Harmon Killebrew. 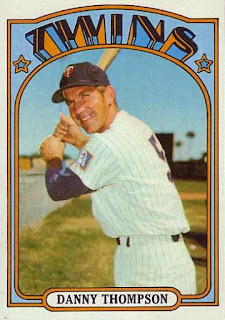 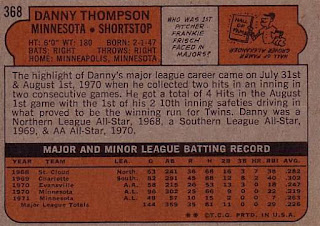 Posted by Douglas at 8:31 PM No comments:

If there is one team associated with the Rookie of year award it would be the Dodgers....Jim was the second Los Angeles based recipient of the award....his numbers weren’t awe inspiring (Joe Morgan had better numbers in 1965).....but maybe it was his bat’s contribution that was so highly relevant to an offensively starved club in pitching rich era....Decent seasons followed as Boys in Blue maintain their pitching first policy...A 2nd baseman by trade but flip flopped to 3rd every other year....reached the end of the line with a subpar 1972 as did some of his teammates making way for the Buckners, Russells and Garveys to take over... became an American import to Japan...later skippered the Mariners, Cubs, and Brewers to forgettable season....California born and raised....one team for entire playing career. 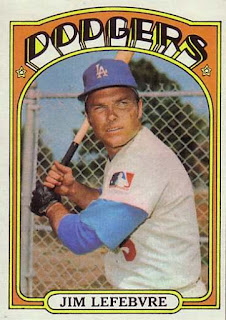 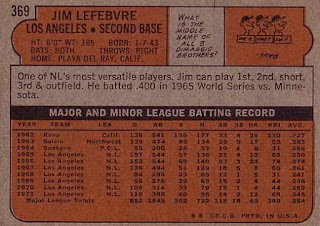 Posted by Douglas at 6:33 PM No comments:

A great complimentary cog for seeming unfaltering Oriole omnipotence....not a star, for the O’s had plenty of those, but a vital piece whose role of leadoff made everybody just a bit better....to be short lived at this point of his career....had a terrible 1972 hitting .206 and was released before 1973 Spring Training...Don’s story begins in Southern California and USC’s baseball program...signed by White Sox as an infielder.....put in four years in the Chi-sox infield with so-so production...trade to Baltimore and immediately relegated to left field...Paid out immediate dividends with 40 point BA jump...racked up BA of .282, .291, .271, .290 in successive years 1968-1971....also led the AL in runs in 1971....Needless to say met the impeccable Oriole standard for fielding prowess... Father of Damon Buford. 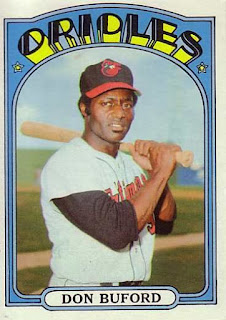 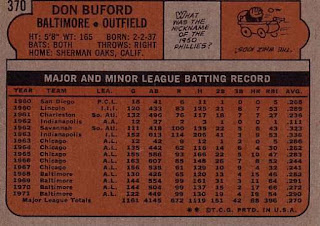 Posted by Douglas at 4:25 AM No comments:

like teammate Wade Blasingame a highly touted southpaw prospect out the Milwaukee Braves organization circa 1962...Curve ball control specialist who kept the ball low.....like Wade, he didn’t fulfill the advance billing....Given a “second Koufax” tag which turned out to be more of a curse....bad timing was the culprit, no run support when he pitched well or had periodic ineffectiveness....Unfortunate in that the Braves were a better than average offensive club and had a winning record in all of their Milwaukee years....Exception 2nd full year Denny wins 17 games on the back of a rare instance of Brave run support because his 4.13 was higher than average ...otherwise his line is a one of losing seasons or being one or two in the win loss column....1968 trade to Houston resulted in Denny being with offensively challenged team as a general rule.....Astro win loss record was 30-46 despite a lower ERA (3.40) than for the Braves (3.63)....Sold to the Expos for 1972....won two games in relief but his 7.74 ERA indicated he was more arsonist than fireman...Final Tally was 90-105 record. 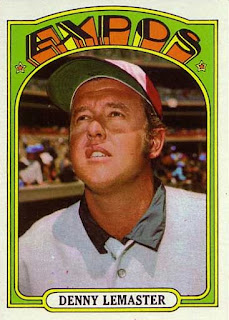 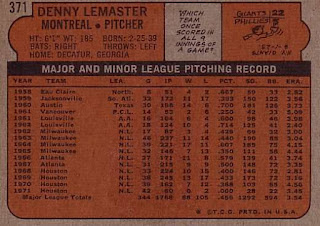 Posted by Douglas at 7:53 AM No comments:

Irony, one of players traded to Astros for John Mayberry earning a very small note on the backside.... the regal sounding Lance Clemons...never played for the Astros....Bulk of MLB time, 24 inning and one win was already spent with the Royals 1971...did get in 5 shell shocked innings for the Cardinals in 1972....whisked away to the Red Sox as a dreaded player to be named later deal....briefly resurfaced somehow winning a game for Boston 1974 despite a monstrous ERA over 9.00....passed away 2006.....Showing a bit more promise was wealthy sounding Monty Montgomery...had a clean sweep with a 3-0 record in 3 games with a solid 2.11 ERA in 1971....Returned to bookend  Royals 1972 season.... but spent most of year in minors....went 3-3 and logged in 54 inning highlight being a shutout of California on Sept 7th....had great trouble in getting anybody out at AAA level thereafter....one odd coincidence catcher Bob Montgomery’s nickname was “Monty” 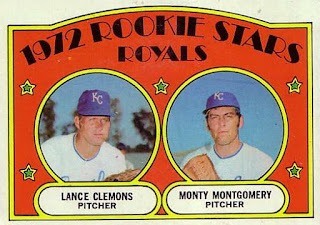 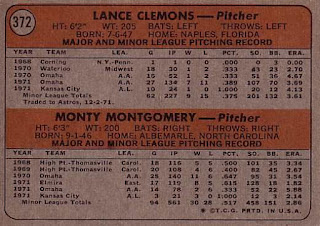 Posted by Douglas at 6:50 AM No comments:

Change of scenery, change of career....on a holding pattern in the Astro’s system....never fully broke through getting collect scattered Abs showing glimpses of power but anemic batting...Terrific Royals debut: 2nd in AL RBIs with 100, a surprising .298 BA....another steal for the fledgling Royals and considered one of worst all time trades by the Astros...His encore in 1973 featured the league best on base %.....after an off season in 1974 rebounded nicely in 1975 with career best in home runs and RBIs....spent two more years in KC....sold to 2nd year Toronto Blue Jays as the Royals made way for Sports Illustrated cover cursed Clint Hurdle.... Mayberry continued his home run hitting ways by slugging 92 in six seasons....last team; he was picked up by the Yankees in their annual veteran hunt for reserve players 1982. 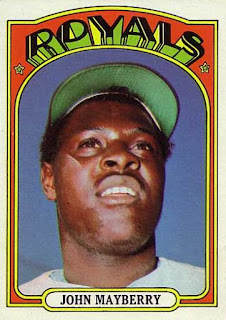 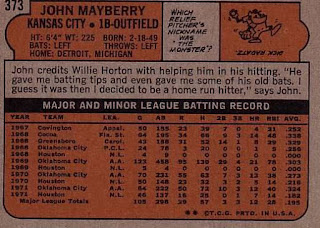 Posted by Douglas at 8:37 AM No comments:

Shortstop synonymous with Cleveland....Sometimes an exceptional minor league hitter that did not translate to the next level....Career can be described as one rookie campaign (1970) of regular work followed by a chain of call ups and limited used reserve.....1970 stats represented almost 50% of his playing time.....most of the time BA hovered around .210 mark nothing remarkable....long ball ability was hit and miss; had 7 out of his MLB career 9 in his rookie season....left Cleveland affter 1974 for short stints in St Louis, New York Mets, Milwaukee Brewers and the Oakland A’s farm system. 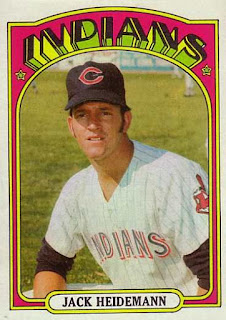 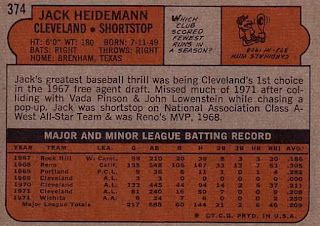