1st year manager Cleveland Indians....another brother act like the Brinkmans…Ken was the older brother to Bob (#759 also a high number) who was probably the more famous of the two…Held counsel on three full losing season for the tribe…His seasons were enhanced due to Gaylord Perry’s presence, lord knows what they would have been like without him…A luxury not the previous mangers did not have…Interesting background picture that is mysterious with its barren trees, small houses, and generally non Spring Training…Looks like the backdrop of the movies Mystic River or the Deer Hunter or my home town (down by the dam) but not the traditional Florida or Arizona settings of spring training…Ed Leon, Steve Hargan, Ed Farmer, Steve Mingori cards have similar card backdrops but Aspromonte’s doesn’t even appear to be a ballpark its more of the likes of the poor side of town…In 1971 Ken managed at Wichita (also a losing season, in fact he had only one winning season in 7 years of managing) so the picture would not have been taken at that year’s preseason…still alive along with his brother....Batting champ of the PCL in 1957, the last year of what it considered the circuit's golden age 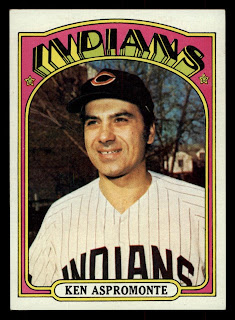 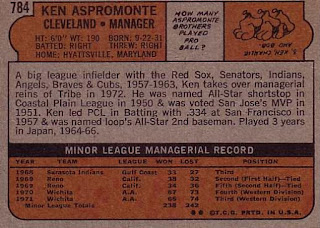 Vic Davalillo…   I never had this card…


Should be in the skinny player HOF…There are many kinds of Vic’s over a 16 year career…but one fact remains always a hitter for average over power over his career…An American league starter in the 60’s… morphing into part-time outfield with the Cards and Pirates and became a Manny Mota type pinch hitter delux…ended career his LA as teammate of Manny...All in all Vic’s best batting averages were with the Buc as the 4th outfielder with Al Oliver, Clemente, and Stargell… Got more playing time when Stargell went to first sacker to replace an ailing Bob Robertson in 1972....started poorly in 1973 a sent to Oakland where he didn't do any better until the playoffs…overall an excellent post season career, with a .323 BA… played playoff games with the Pirates, Oakland, then the Dodgers...Brother of Yo-Yo Davalillo who had 64 ABs for the Washington Senators in 1953 and long standing member of the Havana Sugar Kings. 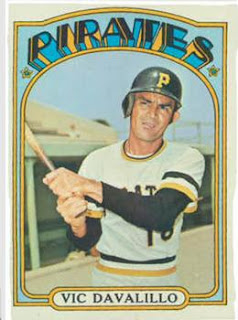 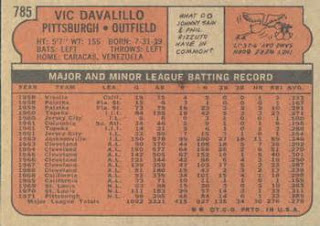 The bespectacled and possibly stockier brother to Senators and Tigers shortstop Ed Brinkman  … typical of 3rd string catchers of age, considered a good field no-hit player and Chuck didn’t disappoint… Not only no hit, virtually zero power… did get one jack in his MLB career of 306 ABs, which is good considering  had 1 hr in 1300+ minor league career at bats…  In his own way, Chuck is amazing in that he played so little for so long in the bigs…. Had 80 ABs combined in 1971 and 1972...In 1973 at the moment that Chuck moved to the 2nd string his White Sox days were numbered…His career is indicative of the Peter Principle, that people are promoted to the level of their own incompetence (BA .187)...Sorry Chuck. 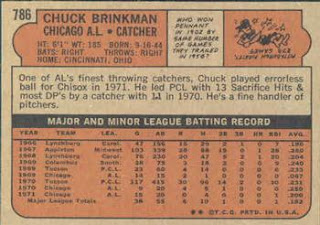 Posted by Douglas at 9:13 AM No comments:

#787 Ron Reed:  The last card of the massive 1972 set, but the first card for this blog.
1971:  A comeback year for Ron who reestablished himself as a starter.    His career started strong with 1968 all star appearance and an 18 game win season in 1969.
The picture:  Definitely  spring training with what appears to be a Yankee in the background.  It appears to be an auxiliary field so I don’t if was a shared facility.  But then again spring training in 1971 was not the cottage industry it is today.
Liner Notes:  I admire Ron Reed for he was able to be one those veteran journeymen coming out of 1960’s who were able to pitch well into the 80’s.  In Reed’s case, he goes from starter to a relieving roles as closer, setup man, or middle relief.
Playing memory:  I remember him starting the second game of the first NL division series.   He lost and Braves were swept.
What interesting about him:  Dual sport player… He also was a two year NBA basketball player with the Detroit Pistons.  Which in those days wasn’t so uncommon.   Near the same time there were two other basketball baseball combo player.   One player with a similar resume at the same time was Twin call up/ABAer Cotton Nash.  But by in large the most famous of all was Dave DeBusschere  who was Reed’s  player/coach at age  24 the youngest NB A coach ever!  Needless to say major league sports will never see the likes of this scenario ever.   I wonder how many baseball talks they had and if Dave swung him to take up baseball instead.   It worked well for both.   DeBusschere is in basketball’s hall of fame.  Ron Reed appeared 20 major league seasons.  The only funny thing was that the Pistons were terrible during Reed’s tenure. 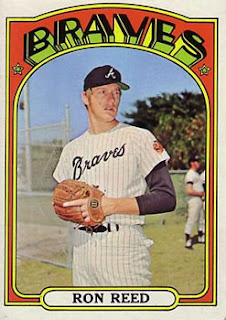 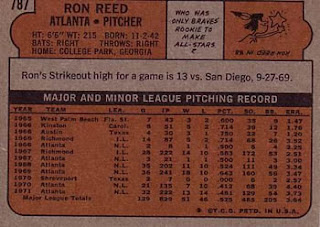 Note  I have 3 1964 White Sox cards of DeBusschere and it took me two decades to figure that this basketball player and baseball player were the same guy.   Just didn’t read the back of the card.   I don’t know why.

Tonight the unveiling will be begin...I make this announcement as so to promise myself to get it started.
Posted by Douglas at 10:31 AM No comments: