Some people have a bad rap because of a play (see upcoming 114 Bill Buckner)…..the word association with the name Jim Fregosi  is on the negative end of steal of the 70’s….. should be better known as the face and offensive point man during the California Angels franchise first decade...three time winner of the Gene Autry trophy as Angel MVP…. his batting numbers were modest by most other teams standard but they were stable and consistent with the Angel philosophy of small ball and stingy pitching…..Last of the original Angels being a late season call up in 1961….A mid season call up in 1962 solidified his role on the Halos….all star 6 times in a seven year span starting 1964….Best season in Anaheim was 1970 when he went yard 22 times and drove in 82…..Fregosi’s high mark was short lived for his numbers nosedived to 5 homers and 33 RBIs in a tumultuous and injury plagued 1971….The plan was for Jim to be the answer to the Met’s weakness at third base….Mets should have known what they getting with an 11th year veteran ….in reality his 1972 numbers were nearly identical to his last year as an Angel….His tenure at Flushing Meadows NY lasted 1  ½ years, in the meanwhile Nolan Ryan wins 295 more MLB games….Fregosi moves on to Texas mid 1973….a helpful reserve but his starting days were over….Retiring as player he returned to Angels as a manager midseason 1978….Was his lifelong dream fulfilled…..Helmed his long associated franchise to the AL West pennant in 1979 buoyed free agency contracts fueled by deep pockets….plus one Nolan Ryan, the man indelibly he was forever linked to…..Alas Ryan soon departed and Angels tanked….Fregosi exits to manage AAA Louisville….while not major league the Red Birds won two league titles and set minor league attendance records….invited back to the MLB scene by White Sox 1986-88….Within a five season stint managing the Phillies was able to helm them to a World Series berth falling to the Blue Jays in six games….finished his managerial calling with two years with the Toronto Blue Jays….passed away in 2014 after suffering from multiple strokes which began on a MLB cruise....handsome young man back in the day, one of the most photogenic players of his time. 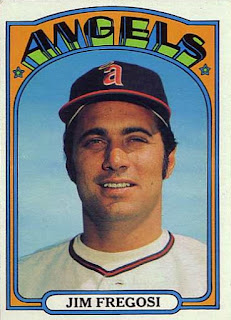 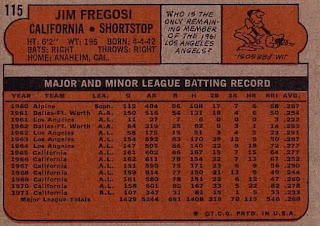 A complex career, very similar to Skip Lockwood….marginal pitcher early on but matured to have a solid prime….Upon further review Farmer’s on the field performance may have been effected by a genetic kidney disease (Polycystic Kidney Disease) that would eventually take his life on April 2020…..Despite this a model perseverance……His 2  ½ years with the Tribe was uneven resulting in eventually landing in Philadelphia…..A low ebb came at end of 1974 after 5 MLB seasons had 5.05 ERA….a return to minors resulted in shoddier work….did not play in 1976 due to shoulder surgery…..without a club scouted and was signed by the Baltimore put in AAA….his 1977 return to the bigs resulted in a dishonorable “infinity” ERA as an Oriole ….acquired by the Brewers  assigned to minors….an impressive handful innings in Milwaukee after being called up did raise his value to be traded to Texas…..His  new employer gave him sorely needed work at the big league level; albeit of short duration….traded to White Sox and his career was instantly galvanized….instant game saving relief for his beloved south siders….saved 44 for the rest of 1979 and the duration of 1980….made all star team in 1980….free agent after 1980 and was re-signed for one year with a hefty payday….a fair 10 save total although his ERA ballooned to 4.61….a Chicago Tribune interview suggests that a kidney related physical decline may have started after a nasty on field fight with Detroit Tiger Al Cowens in 1979….reportedly Cowens wanted to even a score from a beaning incident while Farmer was a Ranger….moved via free agency for a second run with the Phillies (almost equally unsuccessful as the first)….Released then surfaced with Oakland for his last MLB appearance….doggedly spent another three years in various efforts to pitch his way back to the show….. a true rolling stone playing for seven big league franchises plus playing for two other farm systems….also had a spell in for Independent team and a disastrous 2 game appearance in the Mexican League….received a transplant donated from his brother....was a long time White Sox announcer his hometown team and location of his most success. 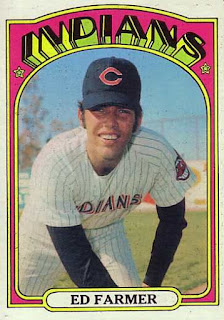 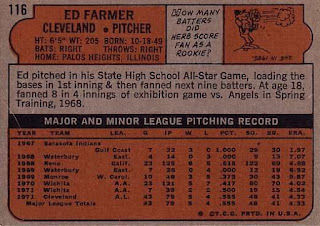 Twice a mid season call up to fill the Cubs centerfield spot….a trouble area for the franchise at the time.... speedster and a line driving hitter....hit an amazing .367 in PCL Tacoma prior to his Cubbie stint in 1971....accounted decently for himself well in his second go round for the northsiders hitting .287....despite his year was not invited reprise his role for the Cubs in 1972…..stayed in minors continuing an extensive farm system livelihood going back to 1962….once a Dodger prospect….got one more short stint for the Cubs in 1973 but by in large a majority of that season and the next were spent in AAA Wichita…..had a short trial in Mexican League in 1975….hit well in limited at bats. 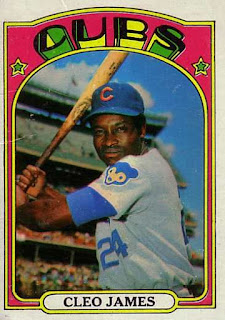 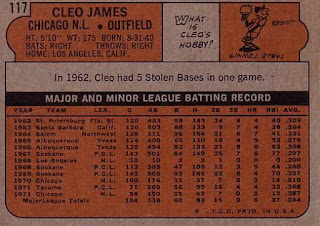 At the time Milwaukee property....Career record 57 wins....Lost 40 more games but was a inning eater in the Milwaukee Brewer’s early years.....Some unusual jukes in his career….Story goes wrote in a “1” in front of the 35K offer put out by the A’s organization; ballsy but the organization went with it….Pitched in High School but was made a position player in minors…..the Rule 5 caveat placed him in KC with the big club 1965….very little impact appearing 42 games mostly in late inning defensive work….only played in two entire games….wedged in 33 at bats and 4 singles……returned to minors for a couple of year with no appreciable forward progress…..made the metamorphosis from position player to the mound in 1968....taken in the 46th round of the expansion draft by Seattle…..one of few people who can say played for the Pilots near the terminus of their existence….Followed fellows refugees into brewtown…..A four year starter completed 729 innings and a fair 3.75 ERA….a trade to the Angels gave Lockwood a taste of relief but limited ineffectiveness….Wound up with Oakland’s farm system for 1975….using two AAA team was able to resurface with the NY Mets…the late season call up resulted in his best MLB work….was able to parlay the progress into being the Met’s closer for most of four years….Tested free agent and was signed by his native Boston Red Sox….unfortunately both sides regretted the move, Red Sox claiming Lockwood hid prior injuries and Skip claiming underutilization….released in 1981 spring training although Lockwood was  ½ million dollars richer via Rouge Hose coffers… .Money not wasted after forgoing collegiate offers out of high school was able to get college degrees in off season….Changed teams in off season many times but only part of two trades….Wore corrective eyewear during career although sometimes this hidden from his employers 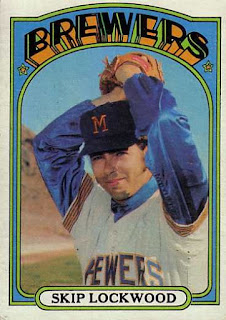 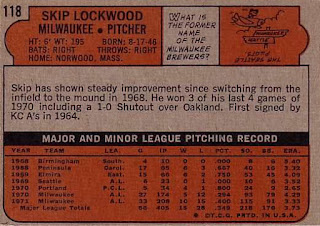 Shortstop turned 2nd Baseman....Known as a good glove man....Developed with the Angels farm system but with nowhere to go with an entrenched Jim Fregosi holding a long standing firm grip at short ...was a regular the 1970 AAA Hawaiian Islander club to fell two games short of a 100 win season (hard to do for all minor league season are shorter than major league)....traded to Atlanta for 1971 for John Burns who never was close to being in the majors, in essence a giveaway....allowed incumbent Sonny Jackson and his questionable glove to try another position....Perez first two years resulted in an underwhelming .227 BA....the Braves were patient with him and his bat which started to gradually climb in the next three years.....meanwhile Perez successfully transitions to 2nd base ...Braves wanted to try other options in the infield trade Perez to Giants midseason 1976.....Traded to Yankees just prior to 1977 season resulting in comprehensive bench riding....one game and four at bats later is traded to the  talent depleted Oakland A’s gutted by free agency departures.... an assembled a patchwork crew....Perez succeeds the traded Phil Garner in his last full season....Small injuries hindered his return to the A’s..... In 1978 stumbles badly going 0-12 and getting a pink slip early  in the campaign....finished up 1978 as a Met farmhand in AAA.....as injuries increased, he retired and returned to his adoptive home of Atlanta....used his name as ball player to successfully sell insurance leading to the development of his own agency....still attend Braves alumni functions. 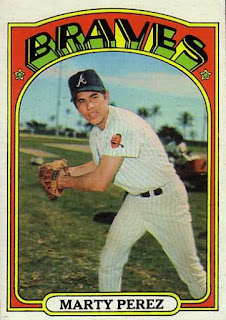 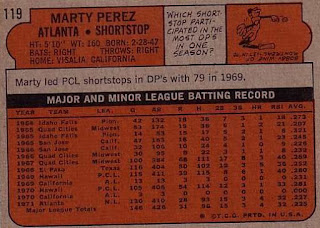