If there was ever a sustained low point for the Yankees before the free agent era, it was the latter half of the 1960’s....Mickey Mantle was ailing and nearing the end of the line calling it quits March 1st 1969....Jerry and teammate Bobby Murcer were both tabbed as the rays of hope for the franchise....both brought youth and promise and were fresh from coming off a military hiatus in 1968....As is well known Murcer wound up Mantle’s eventual CF replacement but initially he was inserted at 3rdbase... Jerry was the first real heir apparent to the Mantle's NY Centerfield....On May 13th Kenny deployed at 3rd and Murcer to the outfield mostly right...stayed that way for the rest of the season....Kenny’s rookie season was highlighted good speed and a .256 BA....liability: light hitting....a poor 1970 season demonstrated Jerry not even the the answer to the 1967 vacancy left by Clete Boyer....1971 nevertheless retained Yankee employment platooning 3rd base spot with Danny Cater....rebounded with a .262 average....1972;  lost time as Yankees were trying new avenues at 3rd....relegated mostly to SS....trade to Cleveland for 1973 resulted in a handful of plate appearences and his outright release one month into the season....returned to Yankee minor league system....never made a return call to the majors....stopped playing baseball 1978....hometown Beloit Wisconsin. 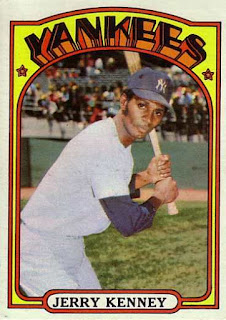 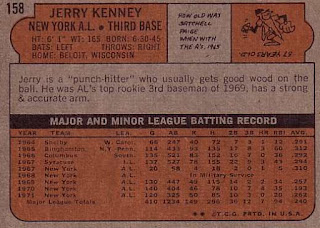 1st year Expo backstop....Of Italian heritage from the San Francisco bay area.... defensive specialist,  whose value was more invested by intangibles such his handling of pitcher, clubhouse leadership, and strong team ethic rather batting box herorics....came up in Cubs organization...could put up strong minor league power numbers and show promise with some late season call ups but by in large could not gain significant playing time in  Chicagoland....did get brief  shot to replace Ernie Banks at 1st base but languished at .228 BA in 1966....left in minor league limbo until taken very late in the expansion draft by Expos....played sparingly in Montreal but stayed with the big club 1969....hit .105 (combined with his previous year with the Cubs went 10 for 100 at bats)....was able to raise BA to .269 in 1970 a personal best....next three Expo accumulates more playing time but BA lands in a lackluster .230 range....still was Expos #1 catcher in 1973 a year they flirted with NL East crown reaching personal heights in home runs (7) and RBIs (46) ....with the promising Barry Foote and Gary Carter in the wings Boccabella is traded to hometown San Francisco for 1974....ware and tear of catching seems to have caught with him and hit a meager .135....release after the season.....was known more unique last name and Expo PA Announcer’s extended pronunciation than baseball talents.... clean living chap. 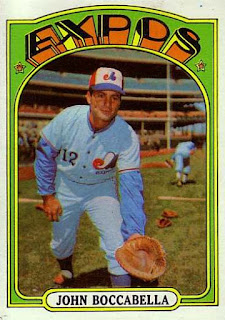 Posted by Douglas at 7:30 AM No comments:

At his prime, a very formidable pitcher....most known for being one of the first free agents but it was more of a detriment to his long term hopes....it was not the big pay day other would reap a year later...although born a product of Orange County California the eventual local of his glory days of his MLB employment....After high school took his glowing reviews up the Pacific Coast Highway to U of Cal Berkley....From there made a return ride to So Cal being the 1966 1st round draftee by the California Angels....a short time in the minors MLB debuted 1968....from the git go in mid season;  effective...2.21 ERA and 4 win in a varied role....1969 quadruped win total establishing himself as ace starter....faltered with 11 wins 1970 but ERA was only up by half run a game....strong comeback with a 20 win season 1971, seemingly undistracted by a toxic Angel's clubhouse environment that year....1972 follow up was derailed by injuries 8-11 record although once again ERA a positive 2.81....never the less traded cross town to Dodgers....swap earns dividends with 14 win 1973....reprises 20 game winner status in 1974...voted #2 in NL Cy Young second only to teammate Mike Marshall bullpen dominance...wins 19 in 1975 in more dominant performance when compared to the year prior....ranked 5th in Cy Young voting....then the free agent that left Andy more legal cannon fodder than anything else....While fighting the reserve clause, did not get the money intended....only a few teams made offers that fell short of expectation (sounds suspiciously like the first case owner collusion)....the Braves contract: 1 million over 3 years was about twice the Dodgers long standing offer...missing out on spring training, Messersmith toiled to a 11-11 record ….wore the word Channel 17 on jersey in reference to Braves owner Ted Turner TBS cable TV station...things headed downhill quickly...over next three years played for Braves, Yankees and a return trip to Dodgers (who apparently held no hard feelings about Andy’s previous exit).... only won 7 games over in that time due to injuries....out of baseball by 1978 for the free agent pioneer. 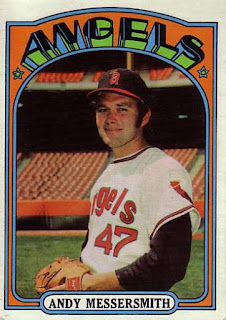 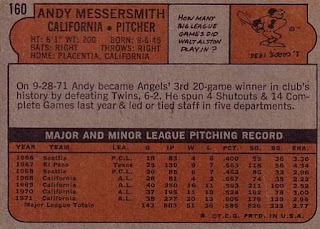 Long time farm hand who was able to secure two full seasons in the bigs....Odd career close to the majors....Played college at UCLA....as a 19 year old, first game in professional ball the first game for the second year Houston Colt .45s April 9 1963....struggled to stay above .200 but hit what would be his lone MLB home run....sent down to AA San Antonio  and by in large stayed at AA level until 1970...in the Cubs chain, was able to reach AAA Tacoma...earned a full season with the Cubs in 1971...worked as their #1 CF appearing in just over half the time  in committee scenario....hit .256 with no power....a trade to Brewers brought him into a glut of outfielder....taking the 6th spot did account for himself with .312 BA in 154 at bats....plate numbers weren’t enough to hold a job...too bad could have responded well to new DH rule....still played in minors twice changing teams in “unknown” transaction....oddly enough finished career in 1975 at AA San Antonio, his first minor league assignment 13 years earlier....MLB stats 543 at bats....a .260 BA one lone home run. 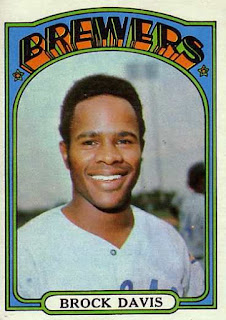 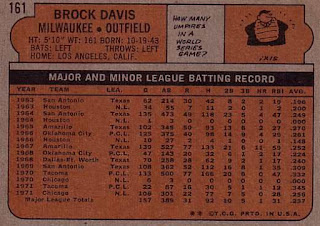 Jerry Bell, Darrell Porter, Bob Reynolds Trio of mixed results the most notable was Darryl Porter....all played up to the 1975 season....Bob Reynolds...a bit of a rambler...having been an Expo expansion pick and taking the field in one game during the inaugural year....then traveling to St Louis (traded for Mike Torres, a great deal for the Spo’s) in 1970....next season continues nomadic existence splitting time between Milwaukee, Cardinals, and both their respective AAA clubs....Reynolds never plays again in Brewtown and is traded to Baltimore just before the dawn of the 1972 year....Mostly in minors but set a place for himself in Oriole Bullpen 1973....put together two solid efforts....ERAs of 1.95 and 2.73 in successive years...roughed up in 1975....continued his rolling stone way by toiling for three teams with a composite 5.19 ERA...stayed in minor league baseball off and on through 1979 season....Jerry Bell was exclusive property of Brewers....drew favorable notices with a 5-1 W-L record after being called up by the Brew Crew in 1972...took a spot in the starting rotation 1973 going 9-9....1974 started nice with a win and 2.57 ERA in 5 games....last appearance on the mound in May signifies arm trouble.....Darrell Porter...was youngest player in AL 1971..... makes his mark in 1973....a .254 mark with 16 home runs finishing 3rd in ROY....turned out that subsequent Brewer campaigns fell somewhat  short of this standard...jettisoned after hitting .208 in 1976....acquired by KC representing a return to his home state....rejuvenated...in 4 years, 3 named to 3 all star games and garnered some MVP consideration...had career best season 1979 putting up 20 HR, 112 RBI and .291 numbers...a sizeable decline in 1980 with a stint in rehab and Porter took to free agency....much notoriety but his Cardinal numbers were not that different from his Brewer days...what was significant was MVP awards in NLCS and WS circa 1982....his WS .286 was solid but Milwaukee’s Robin Yount’s .412 may been more deserving....winner goes the spoils....Made him a celeb of sort and disclosed years of substance abuse in a 1984 book....playing time dwindled after 1984....released by the Cards prior to 1985....signed by Texas for part time work some catching some DH-ing....put a decent OPS of .890 in 1986...returned to free agency and signed again by Rangers...finish in 1987....despite his public disclosure of substance abuse was found dead in 2002, cocaine in blood stream....tragic and the mysterious scenario is not full known to this day. 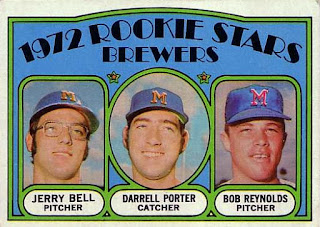 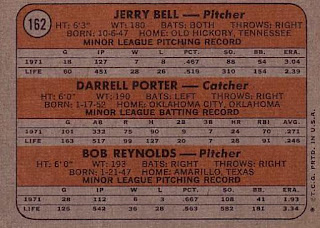 Storied bullpen specialist....colorful and extroverted....longtime employed by both Mets and Phillies each for nearly the same length of time with very similar stats....debut for NYM in 1965... as a swingman had a decent 3.32 ERA but little to show for it, winning two and losing seven....had difficulties thereafter going to minors for ½ of 1966, most of 1967, all of 1968....reinvented himself as an effective and exclusive closer 1969....a role rarely relinquished until the tail end of his career....1969 post season was one game, but was able to hold off the Braves for 3 innings in the NLCS....As a Met racked up 86 saves sometimes sharing duties with others....an off year in 1974 soured Mets brass on him...Made a second home with the Phillies in 1975....pivotal year was 1980....not only had a strong comeback but was the emotional leader for franchise’s first WS win....known for pounding his glove on his thigh....became the spokesman for 7up....1983-4 relinquished closer role for spot work resulting in no saves...after playing gained notoriety as the father of Country Music Star Tim McGraw....a soap operatic story with twists Tim was born out of wedlock when McGraw was in the minor during 1967....minimal contact was made father and son while Tug played, but eventually Tug help support his budding career...Tim in turn, was the emotional and financial foundation as Tug fought brain cancer....Sadly Tug succumbed to his condition in 2006. 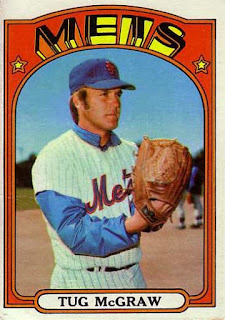 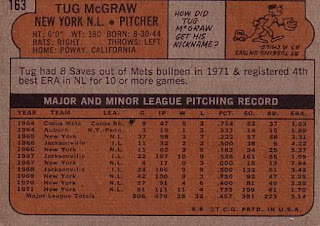 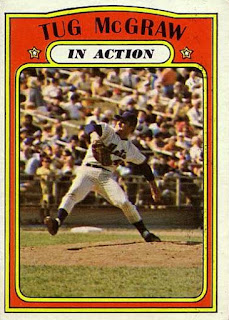 Rookie at the tender age of 21....took over and dominated the Giant's shortstop role in 1971....the promise of a better bat Chris bounced the light hitting Hal Lanier to the bench....his .235 average was a bit low to be a total revelation but 44 RBIs was a positive upgrade....subsequent upped his game in the next two years with a bigger bat....made cover of Sports Illustrated 1973....future looked good but plateau-ed out for the Giant starting 1974.....bat went cold in 1976 and with no warm front was traded to Montreal early 1977....his Expo years showed an ebb and flow...oscillating from .260’s to .220’s....reduced role in 1983 spelled the start of reserve role....split between three teams 1985....last five years comprised of two years with the Cubs and three back with the Giants....interesting note broke into the bigs with only year of AA ball 1970....did not play in the minors again until 1989 when played for the Giant's AAA club in Phoenix....three time all star over 19 seasons. 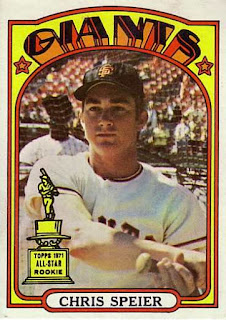 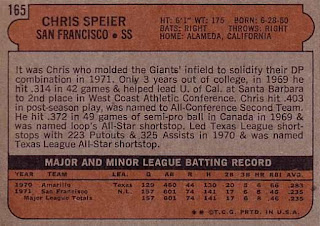 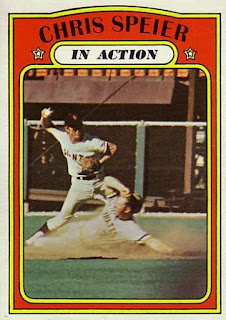 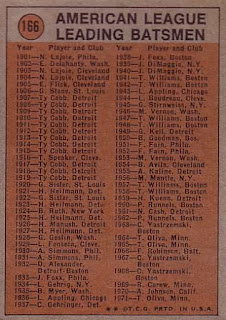