Example of strong rookie season then quick decline....A seven year farm hand who got a chance with Cleveland after developing in the Mets, Pirates, and mid winter acquisition by the Pilots/Brewer franchise....Never had even a taste of MLB work prior.....excellent rookie debut, exceeded expectations, 23 home runs, .268 BA ....Finished second in ROY to Thurman Munson.....Follow up season not as strong 16 home runs and .245 BA.... Ranger moniker on his 1972 card was façade for he never played for them....a case of reacquisition by the tribe just before 1972 contest began....His return to Indians was uneventful....Even though the Senator name is print on his card, Roy get a one team mention in the links section. 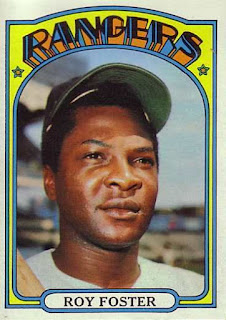 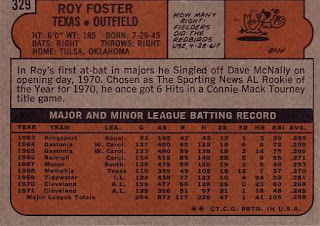 Known to all as “Catfish” because a myth made up by huckster owner Charlie O Finley....Hall of Famer a study in contrasts...Career spent with two clubs enshrouded in controversy....Joined the KC Athletics out of high school never played a day in the bush leagues....instantly pressed into rotation....wins were periodic as KC/Oakland collected prospects and Catfish was on a prolonged mend  from a teenage hunting accident to his foot....gave a glimpse of future dominance with a perfect game against Twins in 1968....Win totals doesn’t hit overdrive until 1970 logging 18....Joins the 20 win club in 1971 aiding himself with .350 BA....repeats 21 wins two more times ...Takes AL Cy Young with 25 wins as the A’s become three peat World Champs 1974....Bid farewell to the bay area as Hunter and the Players Union declared that Charlie O defaulted on Catfish’ two year contract by failing to pay promised insurance annuities....declared agent and wooed by nearly all teams....Donned Yankee pinstripes for 1975 by virtue of persuasion of the ex KC  then Yankee scout who got Catfish to sign as a teenager....The move spelled the end of A’s rule of baseball, next season many would follow by letting their contracts run out....Hunter took to NYY like a catfish to bayou water winning 23 games...No 2 in Cy Young voting....helped Yankees to WS in 1976 with 17 wins....contributed for two more years with a handful of wins as he lost out in the numbers game with new imported free agent arms....struggled thru a 2-9 record in 1979 which finished out his career at age of 33....In post season went 7-2 for Oakland,  2-4 with NYY....five consecutive year run of 20+ win seasons....sadly died from  complication of ALS at age 53. 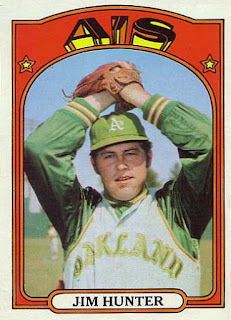 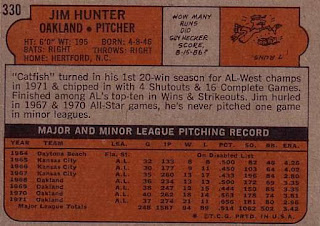 A short unknown career , at least to this writer....Montreal farmhand who was able to get some big club experience in 1971....his single season MLB career line is on the back of the card....started as a Reds prospect....traded to Expos for 1971....not making the big club torched AAA pitching at the Expo's Winnipeg club with a .351 BA to earn his call up...nice debut with two doubles in five at bats...possibly his best game ever...hit two home runs both against Cardinals.....finished with .245 BA. 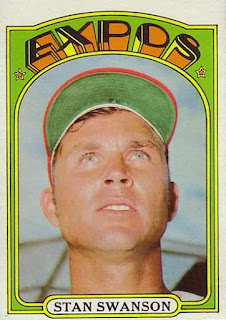 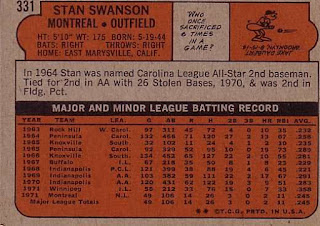 A KC original...career extended to 17 seasons exceeding his 1969 expansionist teammates of Lou Pinella and Tom Burgmeier by two years and all the rest by a wide margin ...incredible longevity given he only shared catching duties at best and was a less than stellar hitter with a .225 BA....a testimony to the value of the Catcher position...not an expansion pick however rather traded to Royals by Astros....was #2 backstop for KC as a 20 year old rookie....Had trouble getting back to big club for entire campaigns until 1974 (8 hits in 55 at bats 1970-71, bypassed altogether relegated to minors 1972)....Took his reserve value to Milwaukee for three years, then Toronto for another six....played the outfield one game, DH for two, and pitched once....All other work in the field was as backstop. 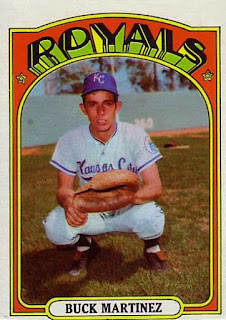 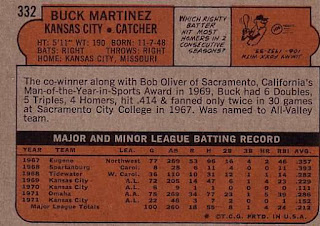 Typical veteran story.....the once top starter hanging on in the majors with middle relief work occasionally getting to closing out games....Well traveled, seven teams in 15 years, most of them for only short stints...travels included the only year of the  Seattle Pilots existence...career plagued by inconsistency, sometimes top of line (1961 18 wins, 1963 20 wins), quickly followed by mediocre year....released five times then picked up by another club....took demotions to minors rather than retiring.....In the period of 1971-1973 he showed glimpses of past effectiveness and was not demoted at any time.....Came out of the Baltimore farm system....despite poor performance in the minor his prime time was his first eight years situated with the Orioles....the bulk of his wins and his personal best ERA took place there....One of his last acts as an Oriole however was to give up Mickey Mantle’s 500th home run in 1967….oddly enough he was on the Yankee roster by the end of the year….…passed away in 2007 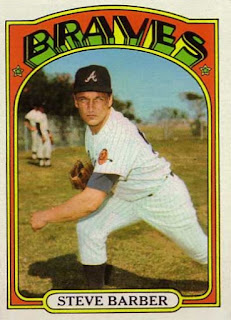 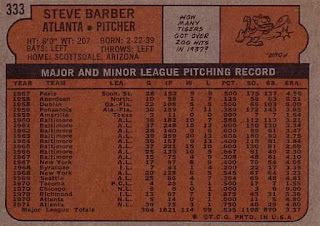 Interesting lot...all players got in a varying amount of MLB playing time....none graced with superstardom in fact quite the opposite....Bill Fahey....career backup catcher with late blooming slant.....came to 1972 Rangers with a AA experience.....his 7 home runs in AA suggested some pop but showed very little at the top....Stayed with Texas organization for 8 years, struggling for playing time or even to stay with the big club at times....Spent 1973 and 1978 exclusively in Ranger AAA....trade to Padres gave him semi regular status a decent .271 BA over 1979-80....sold to Detroit where he finished as a seldom used reserve much like days in Tex...Jim Mason...got more playing time than Fahey but with very limited production....after two Rangers season of hitting barely .200 was acquired by Yankees....essentially snuck in as their regular shortstop 1974...mixed result;  25 errors counteracted his .250 BA which was a career high....failed at the plate thereafter....registered consistently near below .200 for rest of career which included return stops to Texas and Montreal....career highlight one World Series at bat, one home run, perfect OPS....with career BA of .201 in 1400+ at bats, (bear in mind Mendoza line is .215) possibly the worst player with that amount of MLB playing time...Tom Ragland...infielder most stationed at 2nd base....hit poorly in his Ranger days and was caught up in a glut of Texas infielder wantabes...Found himself in Cleveland 1973, passable job with .257 BA but did not get a return ticket for 1974. 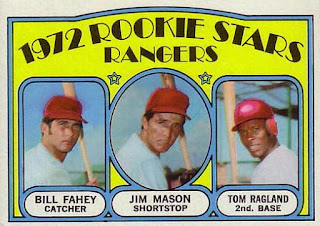 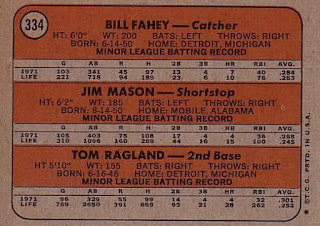 If Bill’s career wins were graphed it would show a bell curve...with the pinnacle topping out with 20 wins in 1969...a workhorse that year logging in 300 innings, a good portion of it in the Wrigley summer sun....Hands never reached those heights again....followed up 18, 12, and 11 win seasons as his ERA  inflated.....a swap to the Twins failed to resurrect his career, won just 6 games 1973....last game in baseball was a particularly nasty shelling by Brewers while in a Texas uniform....Resulting pitching line: 111 wins, 110 loses....passed away recently 2017....started out with Giants organization, won 17 games in AAA Phoenix 1965....another case of a prospect traded rather than kept much to the benefit of the mid-1960's Cubs. 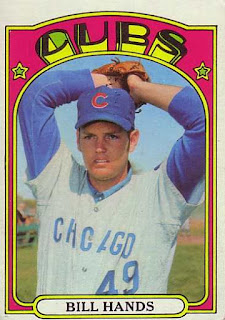 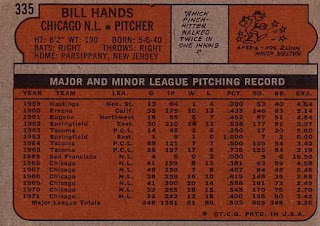 Switch hitting career reserve....never a power threat; failed to connect over the fence in 1038 MLB plate appearances....had a power outage in the minors too, 4 home runs in 2870 plate appearances....versatile, caught, played all infield spots and left field.... once pitched too....passed away 2007....Cuban born....came up through the Minnesota farm system,  got a morsel of work as a late inning replacement 1962....long, exclusive stints in minors thereafter....resurfaced with Braves 1967, getting a sizeable portion of his body of work 1968....collected 354 at bats and hit .230....a 1969 trade to Houston, he proved to be an asset with .308 BA in 196 at bats....unfortunately lost production and playing time in subsequent seasons....trade to Cardinals resulted in just 7 at bats, then took on stints in Oakland and Texas...combined stops resulted in .159 BA....released thereafter....did coaching jobs to earn a living....passed away 2007. 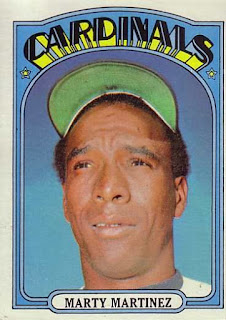 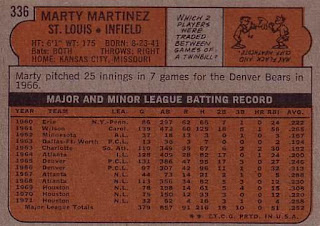 Posted by Douglas at 5:28 AM No comments:

Card collectors know of a wild premonition come true...the trivia questionon the of his back 1972 card asks the question of which pitchers had previously for four teams in a season....Low and behold started his bizarre 1972 in Detroit: pitched one inning, traded to Oakland:  pitched one inning, traded to San Diego whereas he fashions a 5 game, 4 1/3 inning NL career....the circus stopped with a trade to Cleveland, where he remains for the rest of the year...four teams in the span of May 9th to June 11th, 1972....still tied for the record for most teams in a season with 10 others....A Canadian who crossed over the Detroit River to Tiger town...an eclectic sportsman...good golfer and has owned harness race horses....skinny as a rail....came up to Detroit with standard farm stops in Lakeland (Fla), Montgomery (AL), Evansville (ID), and Toledo....called up 1969 and his rookie season was head and shoulders above subsequent seasons....8-6 record, 3.35 ERA, and Tiger Rookie of the Year....next two seasons had similar win pct but with considerably engorged ERA and fewer wins....Once with the Indians, did OK for Indians;  4-1 W-L, 3.54 ERA....maybe tired from the previous year, maybe distracted by other interests, got caught up contract and playing time dispute in 1973 and left after a few days.....the great question with Kilkenny is however, is his favorite TV show South Park? 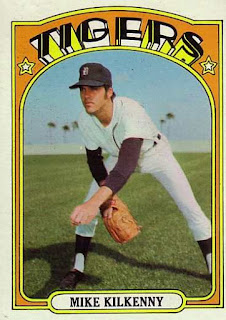 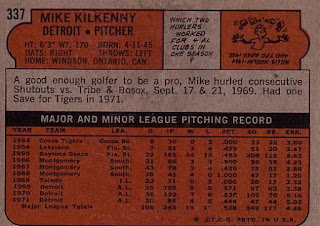 Posted by Douglas at 6:01 AM No comments:

Steadily being groomed to star in the stalwart Oriole infield…In accordance to Oriole standards drafted as an exceptional fielder, plucked out of UCLA….the next big thing in the eyes of Baltimore’s front office and MLB onlookers….teeming with talent as evidenced by three progressively excellent, consecutive, stints in the minors…was hitting .383 in AAA when called up in 1970….jacked up the offensive numbers in the return visit 1971 with 32 home runs and .334 BA best in the IL circuit…right man at the right time, called up for good in 1972, his .278 BA came to rescue of anemic production by both SS Mark Belanger and 2nd baseman Davey Johnson….hit a 100 and 58 points better than his teammates respectively…with Johnson’s exit in 1973 took over 2nd,  allowing him to settle into one position….start of 4 straight gold gloves and consistently solid batting…tested the free agency water and returned to his native So Cal as the California Angels invested heavily via Gene Autry’s bank account…an early on injury as a Halo put a two year delay on the investment return….came back with a vengeance 1979 with career year based on 30 home runs and 101 RBIs…achieved this while batting 8th propelling the Angels into the playoffs for the first time…that year jump started a resurgence exceeding his early Oriole days…was AL leading slugger and in four way tie for home run crown in strike shorten 1981….continued to contribute for the Angels up to being released after 1986 season, wrapping up a 17 year career. 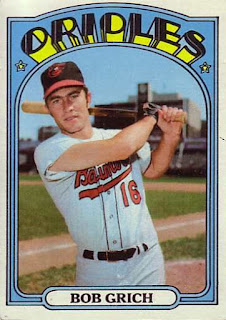 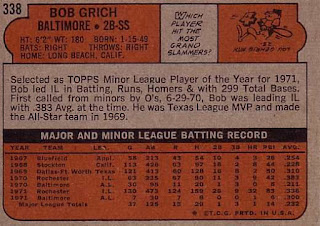 Posted by Douglas at 5:48 AM No comments: