A star of his time....A superstar? HOF? probably just short on both based on hitting fluctuations....however he is the prime AL Catcher most of the 1960s.....and his quality play went well into the 70’s....A one team man, typical of the Detroit Tigers, with his likewise peers being Kaline, Stanley, and Gates Brown....Even better, prototypical  hometown hero, born and raised in Detroit....obtained a degree in history from University of Michigan....Tremendous run of 10 consecutive years being named to the AL All Star team 1964 -1973 and being best in the league from 1966 on....adding 1975 makes up 11 all star games....Was omitted in 1974 because  he was split between catcher and 1st albeit it was his best year in the 70’s.....also in the mix was a run of 5 gold glove awards..... Came to Tigertown at age 21 as a part timer in 1963....earned regular status the following year earning accolades for .300 being the first El Tigre to do so in over 30 years....hit 200 home runs (100 at home and 100 on the road)....while a great relationship between himself and the city was established, it became strained after his tell all book (ala Ball Four) came out around the time of Denny McClain’s 1970 suspension.... while his power and RBI production was down he did a rare thing in 1976, achieving a final season BA higher than his career average at age 34....even if he had a couple of off seasons Freehan would rebound to prominence and usually the Tigers fortunes followed suit. 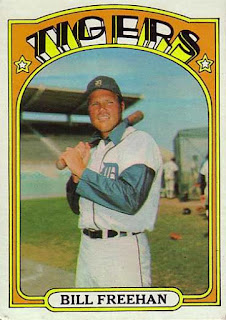 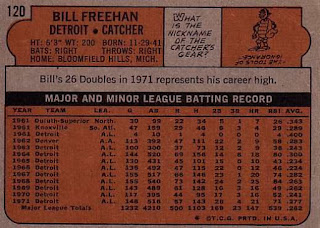 Well traveled pitcher....never found sustainable success for any given stretch of time.....a career of call ups and demotions....neither a starter nor reliever....more successful was son Ed who played 11 seasons from 1991 to 2002....signed by St Louis and by virtue of the 1967 Rule 5 draft turned in a decent rookie season with recently settled Oakland A’s taking a solid seat in the bullpen by committee....Lost effectiveness in 1969 and banished to minors all of 1970....sold to Cincinnati for 1971.....a fall call up that year and stayed with Reds in 1972 albeit in a limited role....wore 3 team uniforms in 1973, 4 if AA Tulsa Oilers are included....overcame the nomad existence with his best season Milwaukee Brewers circa 1974....utilizing his swingman role compiling 7 wins and 2 defeats with a minuscule 2.39 ERA....Career hit a wall thereafter going 1-9 in the next two seasons....passed away January 2020....his September call up in 1971 won a game and shut out the opposition in 11 total innings. 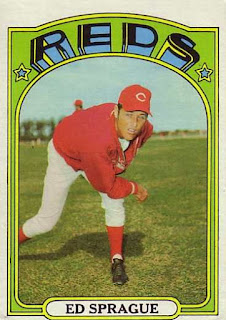 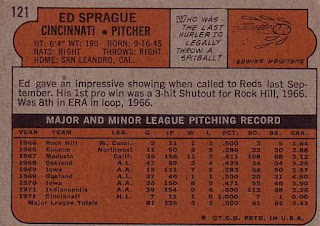 Longevity appeared in MLB 14 seasons and stepped up to the plate nearly  3500 times....patron saint of non daily journeyman everywhere....did things well;  serviceable bat, solid fielder, fine work ethic...pinch hitter or platoon player, good team guy....a definite cog in a given team but usually just short of an everyday player status.... studied under Ted Williams, Whitey Herzog,  Billy Martin in first three seasons....started as the part of the Senators/Rangers started a youth movement along with Burroughs, Harrah....moved along to Montreal then to the northside of Chicago....Found his high watermark of employability and overall performance was 1977 as a Cub....in 138 games hit .298 plus a personal best show of pop with 12 home runs....Biitner’s strongest attraction was with the Cubs and his time on the north side his largest body of work........good sized but was prototypical line drive hitter sometimes puzzling his skippers, Teddy Ballgame for one........Along with the lack everyday work the other snakebite in his career may have been his consistent employment by teams mired in the second division or basement of standings .....The exception was 1981 with Cincinnati who finished at a total of 24 games above .500....the caveat wa  the strike season was split in two...neither half being eligible for the playoffs, and no postseason for Larry...next year Reds lost over 100 games....more than frustration that’s downright foiling....Despite unusual spelling of last name it was pronounced Bit-ner.....Rumor has it that Topps printed 3 1973 Larry Biitner cards for one of everybody else...not true just saying. 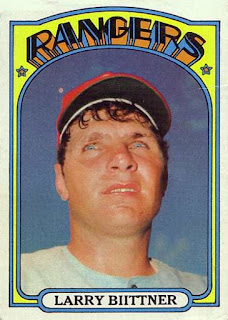 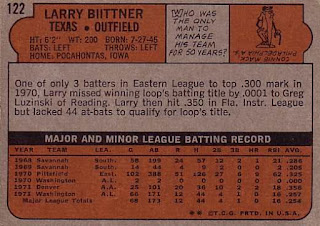 Eduardo Elixbet Acosta....a short timer....As a Padre only completed the back portion of 1971 and a full season in 1972....impressive SD debut, having been acquired from the Pirates along with John Jeter in a deal for Bob Miller, throwing a complete game shutout against the Phillies August 24th....strung along a series of strong starts resulting in 2 more complete games and season end 2.74 ERA.....chief liability was his age.... did not start playing baseball until age 21...was 23 upon starting to play organized ball....Released twice by Pittsburgh (first time) and Houston before first MLB game for Pirates.....Poor start out of gate in 1972 relegated Ed to mop up work in mostly losing efforts...sent down in 1973 did hang around Friar’s AAA Hawaii club for two years....won 14 games in 1973 but did not earn a call up.....ended with a season and portion in the Mexican league 1975 and 1976. 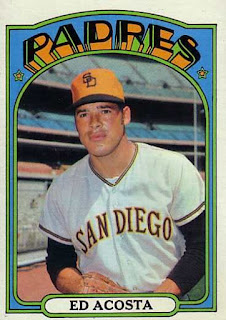 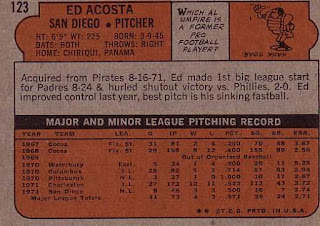 Yankee Rookie Stars...none shown very bright all had a September call ups in 1971...most prestigious of the bunch was Rusty Torres who held some promise sporting a .385 BA and 1.115 OPS....burdened with struggles at the plate with an anemic career.212 batting average....did eked out part time MLB labor alternating with demotions to the bush leagues, last year being 1980........In 1972 the switch hitter couldn’t carry his promising  debut ...As a  full time Yankee flopped to .211 BA and a slugging average cut by over a half.....Discouraged Yankees trade Rusty to Cleveland who were looking to fill multiple vacancies in an outfield overhaul...another failed venture as his BA sank to .205 in 1973....Eventually Torres is shuffled to California then Chicago White Sox then finally the Royals....hit .266 with 11 homers with Pale Hose but at age 29 he was too aged to stick around....finished career in AAA and Mexican league.... Roger Hambright....No further future in MLB....had a 3-1 mark with Yankees in Sept 1971....prior had a decent AA season....from 1972 to 1974 found himself shuffling between AAA to AA....Entered into Mexican League thereafter....last professional season  was 1977 won 21 games south of the border....Lasting legacy was the Nickname “Stump” bestowed by Thurman Munson in Hambright’s brief time as a Yankee.... Alan Closter.....by 1972 was well traveled long time Yankee farmhand....A rule 5 draftee to Cleveland and soon found himself a Senator and then returned for his second Yankee stint...all within a few months in 1966....injury plagued career....his MLB career was 2 wins 2 losses all coming in 1971....had a brief unsuccessful call ups for NY in 1972 and Atlanta in 1973....kicked around in minors thereafter concluding in the 1975 season...fair numbers but too old to for a big league return. 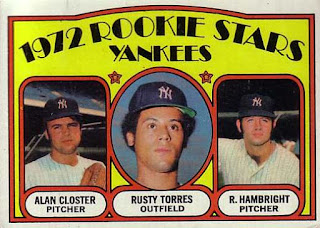 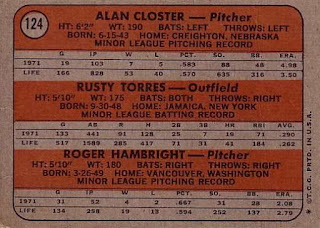