I'd be smiling too...great things are coming in a few years well quite a few years….acquired mid 1971 season by the Reds from the Giants who were in the midst of many a disastrous front office moves….not much of an impact at first….struggles in 72, and minors most 73…note show exceptional slugging pct in that cup of coffee…gained time in 1974 as part timer…made further inroads taking over left field so Pete Rose could play third in 1975…then starting in ’76-79 began a dominance over NL pitchers the decade had not seen before…3 straight years of RBI crowns, hit 52 homers in 1977, a feat not seen since 1965 and not repeated until 1990….needless to say NL MVP…repeated as top home run producer 1978…stayed three more campaigns in the Queen City putting up solid numbers but not like before….high expectations came with a trade to NYM….maybe feeling age at 33 but both parties were disappointed…but not exceed .270 BA in four years….took his final bows in 1986 as the Mets were going with youth…sported the nickname Yahtzee… not sure why. 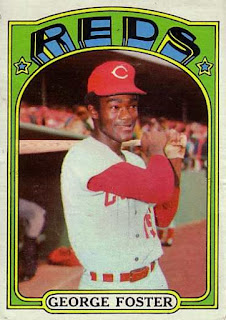 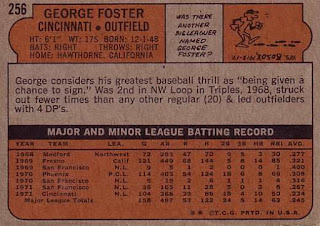 Special note:  I'm taking a break for about a week and then I'll get back on track.

Jim Foor, Tim Hosley, Paul Jata  Tigers were going full veteran leaving no room for this trio…not much here only Hosley was able to hold for several years albeit in an exclusive reserve role…Foor show up for a few innings over three years ending with a 1-0 record….Jata hit .230 in 1972….could not break the Tiger outfield…Hosley has value as a third to second string catcher….started with Tigers, then shifted over to Oakland, got most of his playing time with the Cubs, then another trip to Oakland….hit over 200 home runs in the minors….had 12 in 368 major league at bats….appeared last big league uniform 1981…released during the strike that year….passed away 2014. 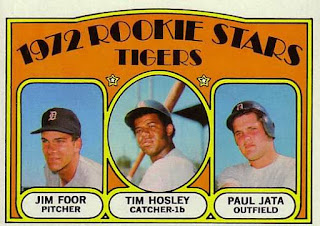 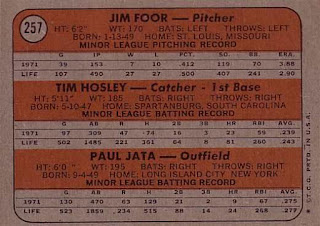 Greatly missed by the Cubs….possibly the cause of the Cubs playoff failures post 1969….not even close to an adequate substitute…an innovative player whose contribution is the one hand approach to catching reducing injuries to the throwing arm…started in the Giants farm system…acquired by Cubs blossomed under Leo Durocher….1966 hit19 home runs to show pop in his bat….a bright spot in a rebuilding year…the Cub’s investment in the future paid off with 28 game improvement 1967…Randy improved his BA by 31 pts…after an off year in 1968 was to come back with a .255 and 18 home runs…Randy was named to the All Star team for the only time in his career….1970 started the run of injuries…never obtained solid BA but probably the greatest loss was in defensive skills…hung on with Cubs up to 1975 season…traded to Twins but injuries bug bit in the form of the knee injury from a confrontation with a teammate…traveled on to Padres, hit poorly, but was helpful in Randy Jones effort for 20 wins…in all probability the slowest player in baseball at the time…The Cubs feeling nostalgic brought Randy for a handful of games in next two years…father of Todd Hundley, also a catcher from 1990-2003. 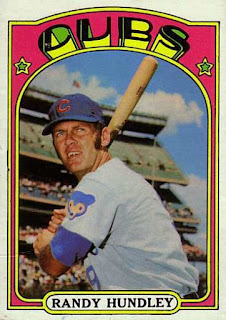 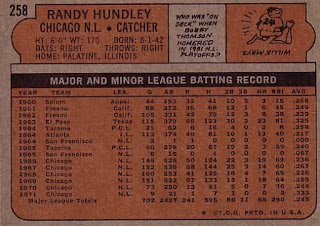 No player from 1971 I can think of is more influential to today’s game than he…I look at two phases come to light; first his early years with Boston averaging an inning each game he appears then in 1972  record setting number of saves with the Yankees…put together it’s possible Sparky’s first true closer…at the time the top reliever completed usually closer to two innings per outing….his acquisition by the Yankees was the first in a line of imports that eventually resulted in two WS wins….over the years Sparky holds court in the Yankee pen…1975 decidedly an off year with 6 saves….bounced  back with vengeance in 1976 leading the AL in saves with a somewhat small figure of 23….In 1977, Sparky was able add 3 more saves to his total but more importantly he’s the first reliever to win AL Cy Young…it was the end of his prominence as George Steinbremer imports Goose Gossage and Rawley Eastwick, effectively putting Lyle is a secondary role….a trade to Texas for 1979 resulted in moderate improvement but was becoming evidently clear time was catching up to him…his worst season to date came in 1980 with a 4.49 ERA….only redeemer was late trade to the Phillies…improved and appeared in two scoreless inning in the NLCS….continued to hang on in Philly for the most of two more seasons in middle relief….career ended with White Sox late 1982…career line was 238 saves…37th on the all time list….has written two books on baseball both based on his Bronx Zoo time. 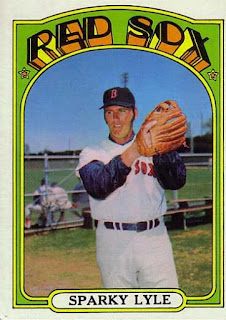 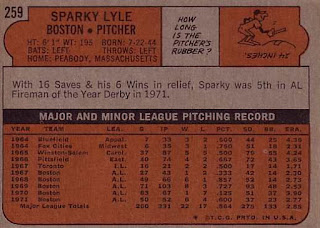 The Road Runner….Fast that fact helped Ralph’s cause….used bunts, choppers, line drives to hit extremely well out of upon full time employment with a .342 clip in 1971….not edible for ROY for he had garnered too much time in multiple call ups over three years earlier…arguably a better replacement for Rico Carty, who was out for the year….Hits just kept on coming in 72, 73, and 74…the last year won the NL batting title…..had one of the best hit total of all time for his fourth full year beaten only by Ty Cobb….cooled off a bit to a still respectable  .278 in 1975 as defenses adjusted….took his speed to the White Sox for 1976…bad team but good performance as Ralph rebounded to .300… repeated his .300 clip as Sox improved by 26 games in 1977…continued in Chicago as his imported teammates departed….hit at step lower .270’s for 1978 and most of 79…sold to Angels late 1979 but was inconsequential…poor 1980 resulted in release mid 1980. …if only the hits could have continued. 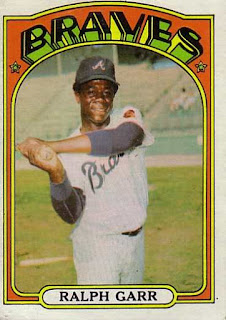 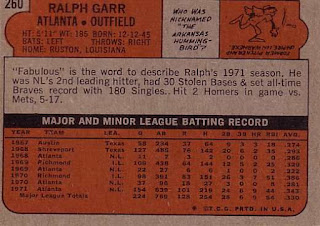 Bullpen employment  throughout career…Coming off a career year with a stingy 1.46 ERA….few of the 1971 Cleveland Indians crew can claim that…Steve’s 1972 resulted in an 0-6 record, a near tripling of this ERA, but led the team with 10 saves…a poor start in 1973 resulted in a trade to his native Kansas City...nice addition….a contributor but never became the top closer….as a Royal was generally consistent with ERA clustering around 2-3 runs a game…career ended in 1979 after ERA ballooned to 5.79….died at age 64 in 2009. 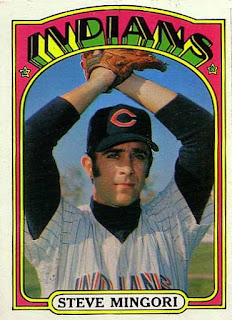 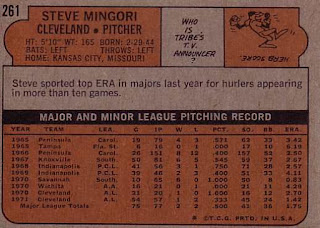 Taking the name of the long time PCL franchise, established in 1969….All in all a futile franchise…small market overshadowed by the city 80 miles to the north…the 2010’s have not been kind…neither was their start…first five seasons starting averaged well over 100 losses a year….thing were so dire, attendance so poor that a move to Washington seemed imminent…to the point that a Washington prototype uniform was created and modeled….Enter Ray Kroc the founder of modern day McDonald's….success was not instantaneous but attendance rose….more talent was imported via free agency….went over .500 win pct in 10th season in 1978 …success short lived, reverting back to less than .500 play…did not rise again until 1984 World Series year…since then one return to the Fall Classic…both losses….Needless to say in 1972 all records on the backside of the card have been broken although Dave Robert’s ERA of 2.10 in 1971 should be the club record given he pitched 269 innings over reliever Luis De Leon 102.….Nate Colbert’s twice achieved mark of 38 homers remain in club’s top ten….Greatest player by far is San Diego native, Hall of Famer Tony Gwynn… Tony, an incredible 3rd round pick proceeded to win 8 batting crowns….most impressive season was at age 37 when he hit .372, and obtained career best figures for home runs and RBIs….Other HOFers (Dave Winfield, Gaylord Perry) have played with the Padres but the franchise only kept them  them during the prime of their career…since their inception as it stands now the franchise win loss record is nearly 600 games below .500. 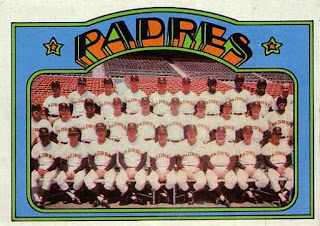 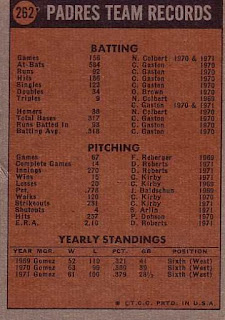 Dominican hero, a trailblazer….not the first MLB player from the country but the first to be born and raised from there….debut with the recently moved  San Francisco Giants…held his own but playing was gradually acquired…production increased accordingly….reached his prime in 1961 received all star nod in 1962….around this time was accompanied by brothers Matty and Jesus…Felipe was a different player; stronger more power (3xs more) than his siblings combined….was traded to Braves before 1964 season…one bright spot for the few Milwaukee fans who knew of the move to Atlanta….upon arrival south, embarked on his career year, taking advantage of the close confines of Atlanta Stadium….led NL in runs, total bases, and hits, second in BA….chipped in 31 of the Braves 207 home runs… evolved into a line drive style hitter and reprised himself as one of the top NL hitters, leading the circuit in 1968…. never found the offensive numbers again but remained a regular for several years….handed around returning to the bay area with Oakland, then Yankees a year after….skills started diminish in 1973….placed on waivers and picked up by the Expos…finished as player with 3 at bats in Milwaukee, 1974…returned baseball as manager a couple years later….moving up and down different levels of ball….all within  the Montreal chain…got his big league chance 1992 as the franchise was moving up….Skippered one of best teams never to have made the playoffs 1994 Montreal Expos….won manager of the year award in the season of no champion….subsequent  years were not as kind…reached 100 win with Giants in 2003…managed 3 more years….Very respected figure in baseball world….fathered 11 children. 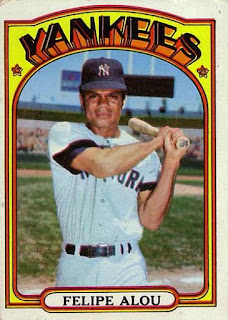 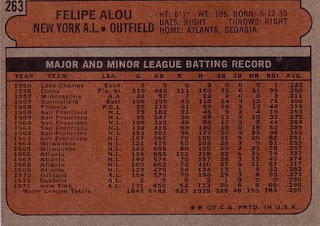 At the time, a new phase of his career; now as a Dodger….had a career that was one of the longest on record spanning 27 seasons….the secret wasn’t overpowering stuff, just the man knew how to pitch….The odyssey starts in Cleveland where he was not used…trade to the W Sox brought a regular role in rotation…John responded in kind winning 14 games in 1965 and 1966 both times best mark on the club…as White Sox bats tanked so did John’s ability to win games…losing record going 10-13 in 1967 even though his ERA improved…rebounded of sorts in 1968 going 10-5 but his # of games were cut short by injuries…next three season John once again found himself losing more than winning…the addition of super coach Johnny Sain failed to light a fire as it did with others….1972 Trade to LA begins a new chapter…starts able to win and avoid losses going 27-12 over two years….cruises at the start of 1975 season as one of the leading pitchers in the league…feels a pop in his elbow and John is out for the year...so starts the legendary surgery and rehab process that bears his name….it wasn’t so much procedure that was extraordinary but the beyond the wildest dreams output shouldered by John….out 1975 his reappearance in 1976 record of 10-10 is tentative but promising…delivered the notice of miraculous event by going 20-7 in 1977….one more year in LA yielded 17-10 mark…took to free agency and was collected by the NYY… output was successive 20 win years….it was his pinnacle, for he never was as good but would continue to be used as 4th-5th starter with Angels, A’s, and return to the Yankees… was a veteran influence…In 1987 mired in the midst of a string of losing records was able to forge a 13-6 record based on sheer craftiness at age 44…played two more season picking up 11 more wins to give John 288 for his career….not in the Hall of Fame but has the most wins of any player not in the Hall….fate for HOF rests in Veterans committee. 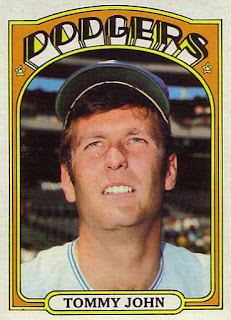 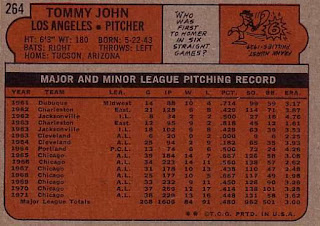 Went out still in his prime…a rarity…1972 was last year….paved the way for the full development of Steve Garvey….his career is 2 acts….first 4 years, 1964-68  was unremarkable at the plate…low ebb was the pitcher dominant year of 1968 drove in only 27 runs and .239 BA….did collect two gold gloves….became a more balanced player 1969…fielding skills remained at par excellent but drove up batting average nearly 40 points and well over doubled RBIs ….had career year in 1970 and showed himself as a major offensive force….319 BA and 111 runs driven in…next two years was contributor to Dodger offense with numbers high similar to his 1969 output….continued to win gold gloves to the end, giving him 6 consecutive awards....like so many of his LA peers did television appearances in off season....also dabbled in broadcasting and one year stint in the Nippon League. 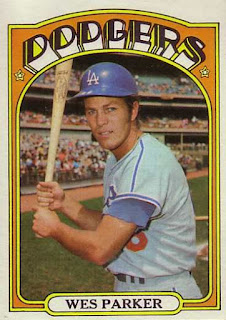 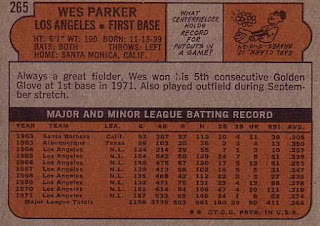