Name was often referred to as “Carter”…An above average line drive hitter in a pitcher's era…Primarily a 1st baseman with stints in the outfield…unspectacular but generally consistent…started in the Phillies farm system…got a regular job with the White Sox in 1965 where he hit a career high 14 home runs…Shortly after a slow start in 1966 he was traded to Kansas City A’s…spent most of his career in A’s organization packing up the team’s move to Oakland…Comparatively his best season was 1968 when finished second in AL hitting with an otherwise mediocre .290 mark…Traded to the Yanks for the1970 season…responded with his best statistical season gathering a .301 average and 76 RBI’s…a drop in production during the 1971 season prompted a trade to Boston for Sparky Lyle…Unfortunately for Cater and the Red Sox he flopped dropping his stock… while Lyle became a legend for the Bronx Bombers becoming a pivotal cog in the making today’s closer…Some consider it the worst Boston trade since Babe Ruth…Finished career with a brief appearance with the Cardinals…career stats were 66 home runs, 519 Runs Batted In, and .276 average. 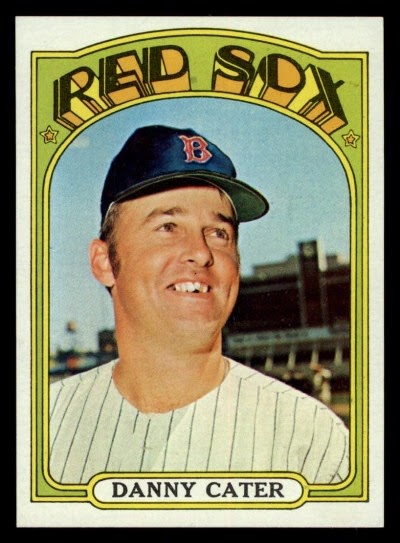 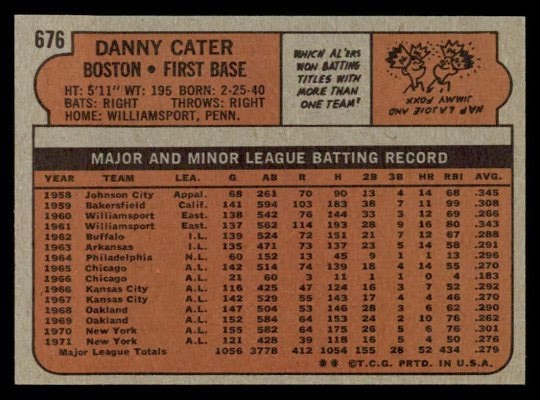 Posted by Douglas at 7:01 AM No comments:

A Padre original from Panama…played for 3 teams never traded…started in Houston Colt .45 organization….started in 1963 earning 2X a brief look with the .45 and 1X in a Astro uniform…was selected by the Padres in 1969 expansion draft…In their initial season, hit his highest MLB career avg; .255 in part time work…followed up with his best season hitting 12 home runs and bringing in 35 runs for the homer happy Padres…1971 Murrell continued to show pop but average declines…1972 Ivan spends a majority of year at AAA Hawaii…hits .335 earning a return to the parent club…continues the trend of adequate power but poor on-base percentage taking only two walks 210 at bats…Never met a pitch he didn’t like…Released and is picked up by Atlanta for 1975…plays mostly in Mexican league thereafter although did try a comeback with Padres AA club in 1977…Hit .347…passed away in 2006. 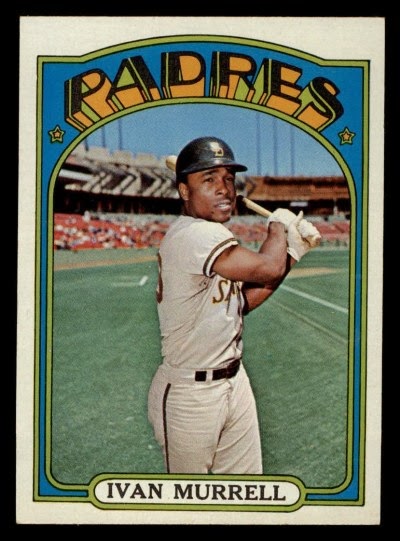 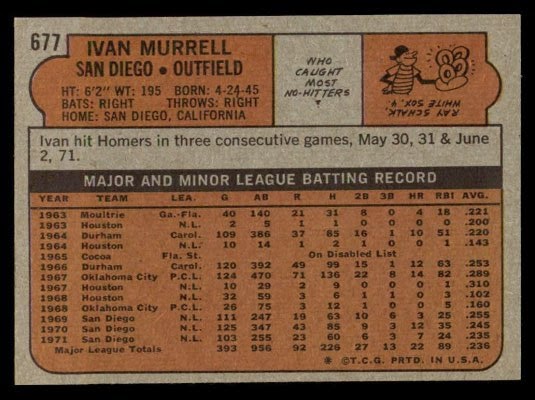 Posted by Douglas at 4:03 PM No comments:

My representative picture (avatar) for this blog site has a connection to this lanky righthander…the ballpark is Bosse Field in Evansville Indiana…the photo was taken in Spring of 1983…The local AAA American Association Triplets vs Indianapolis Indians …The starting pitcher was Steve Luebber…Steve was still holding on as a starter in the Detroit organization…Good minor league pitcher with a career 145-116 win/loss…playing for 7 different organizations…Best and prolific stretch in his career was from 1970 to midseason 1971 when went 33-17 in class A, Winter league, and AA levels….Came up to bigs most to start, replacing Tom Hall who was pressed into relief to turn around the imploding bullpen…Steve was of limited effectiveness…returned to minors for next four years shifting between AA and AAA…next full shot with the Twins took place in 1976…Was marginally improved from his debut going 4-6, 4.00 ERA…released by Twins in 1978...Became a fixture in the AAA circuit playing for White Sox, Toronto, Baltimore, Detroit, and Padres organizations…Very brief call up with Orioles and Blue Jays...Went into coaching after he retired from active play...worked for several of the organizations he played for in the minors. 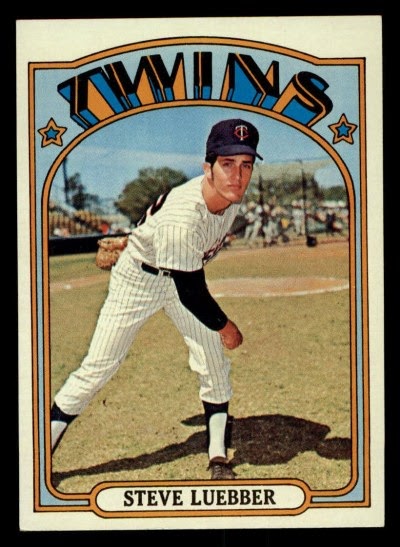 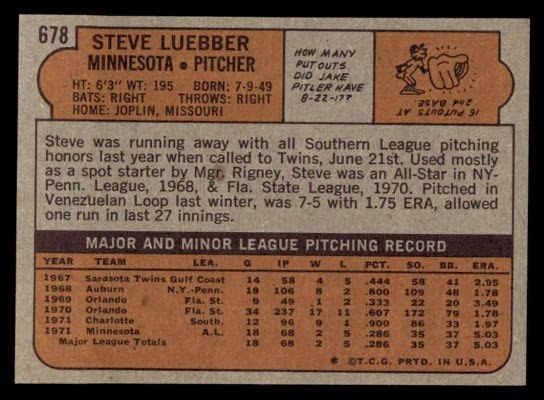 Email ThisBlogThis!Share to TwitterShare to FacebookShare to Pinterest
Labels: Twins


Bob Fenwick…only 56 MLB career at bats but incredibly interesting story…Asian American who is closely associated with oddly enough, Minnesota…was born as an American citizen in Okinawa in 1946…Only second Japanese America to be a big leaguer…as a child grew up primarily the Minneapolis suburb of Anoka…Played for University of Minnesota…Drafted by Giants and proceeded through their farm system…Hit at a .332 clip for AAA Phoenix… had 13 triples which was good for second in the league…despite the stellar year was not called up by the Giants…Taken by Astros in rule 5 for 1972…had to spend year with big club…Traded to St Louis for the 1973 season but the new opportunity proved to be an illusion…had less playing time and was released…hooked up with Houston and Cubs organizations giving him four teams for the year…Signed by the Padres’ affiliate in Hawaii for 1974…retired in mid season and settled in the Northern Minnesota Boundary Waters area…talks romantically and openly about his days in baseball and heritage without regret…check it out. http://bfenwickhistory.weebly.com/about-bob.html


Scrap Iron… a nickname defining a blue collar work ethic, nothing glamorous… Product of Dodgers organization then to St Louis system… Hit very well in AAA Tulsa in 1971 garnering a .324 clip…trade to Houston did not result in playing time but he did stay on the roster all year…Was purchased by Montreal and hit .261 as a backup in 1973…had poor follow up season next year hitting .171…was traded to KC where he reestablished himself as a back up…Selected by the Seattle Mariners where he became the franchise’s first regular backstop…Best season was 1978 when had 11 home runs, 55 RBI’s and .258 Avg…In 1979 yielded more playing time to Larry Cox even though Bob was a greater assess offensively…Released in 1980. 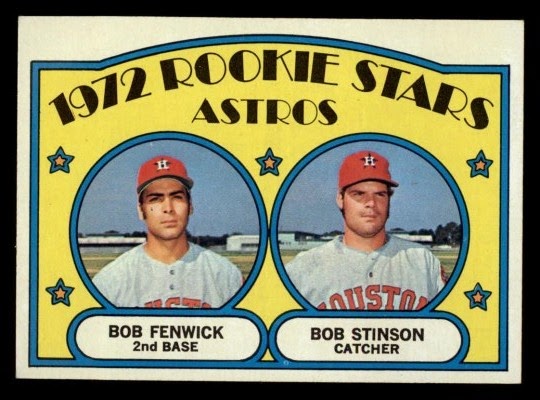 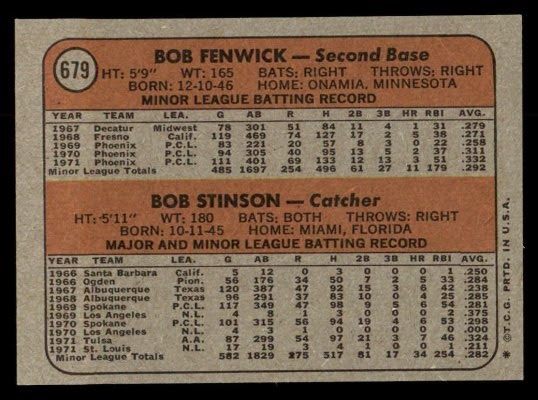 Posted by Douglas at 9:42 PM No comments:

Back in Action now.


The future manager…Coming off his best year ever in a Oriole uniform… came up the O’s chain in the usual way via AAA Rochester… made opening day roster in 1965, but hit poorly…returned to AAA and had a strong year …Became a regular for good in 1966 wrestling the 2nd base spot from incumbent Jerry Adair…solid season and had first of numerous post season appearances…next two seasons held his own in pitcher’s era…named to all star team 1968…  Exceptional fielder…captured three consecutive gold gloves awards1969-71…Gradually gained power and raised BA…1972 he experienced a huge letdown mirroring that of the team…dealing  with injuries, hitting .221, he yielded time to rookie Bobby Grich…Made expendable sent to Atlanta in a package deal…embarked on a career year hitting an amazing 43 home runs, well over double his career best….a decline in defensive skills prompted splitting time at 1st and 2nd base for 1975…Hitting came down to earth too with 15 hr, .251 avg…Set to play 1975 but bolted to Japan after one at-bat…it was an adventure; had extreme culture shock in the far east and did poorly in first season…made comeback on the field in 1976 but clashes with manager off field prompted a return to the states…picked up by Philadelphia in a reserve role…did well in 1977 hitting .321…Entered managing ranks in 1979 teaming with Hal Breeden at Miami…Alternating years he managed up the NY Met farm system…Came to NYC 1984 and met with immediate success peaking with a 1986 world series championship…Never a losing season with the Mets…Later managed Reds, Orioles, Dodgers and presently the Nationals. 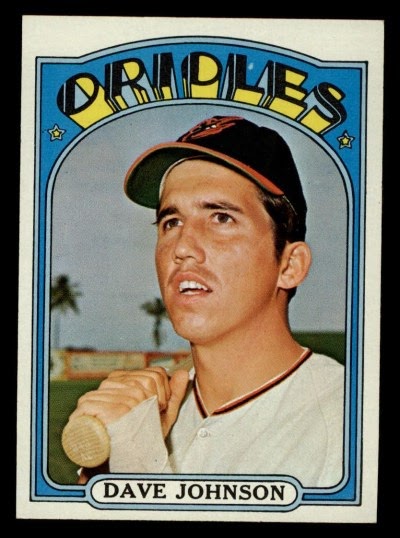 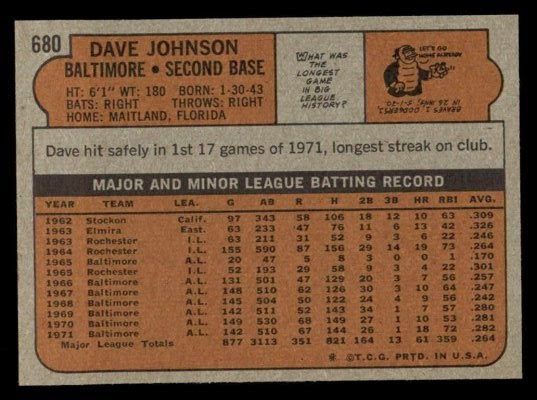 We interupt this blog

Having computer issues.  No postings for a while.   Hope to be resolved soon with loss of pictures or profiles.
Posted by Douglas at 11:50 AM No comments: