The prodigal Athlete and Athletic…In 1972 he was on the third of three stints with the A’s franchise….A prototypical spot starter/reliever throughout his career starting with the Kansas City Athletics…Pitched five out of six season with the team with one year exile to the Washington Senators sandwiched between...Probably best known as the answer to the trivia question: who is the only player who played for the Seattle Mariners and Pilots…Actually he was the opening day starter for both franchises…Was the best pitcher in Pilots inaugural season with a 12-6 record, mostly out of the bullpen…Traded to Oakland for 1970…AL ERA champ that year with a rather pedestrian 10-10 record…true to his career role began the season in the bullpen…June 22 he was asked to start…Made 18 starts for the A’s, winning 8 losing 6….being a starter gave him 116 innings enough to qualify for the ERA crown… 1971 Diego is a primarily a starter but missed portions of the season to injuries…Son David played in the big leagues too….Had a 19 year career with two assignments in AAA Hawaii coming 15 years apart. 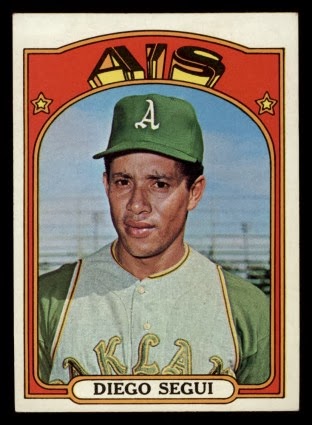 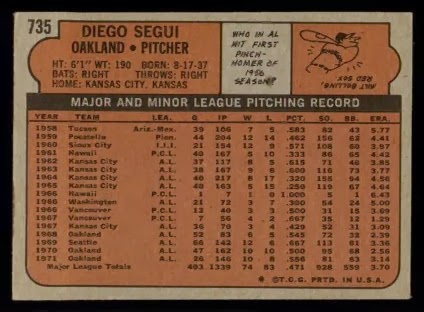 The conversion from outfielder to infield is written on the back of card…at the start of 1972 season the whole Dodger infield was in question….after a couple of years as a fourth outfielder was tried out at second in 1971…actually played more games there than outfield…In 1972 shortstop to replace the aging Maury Wills…Was a regular LA infielder from then on until 1983…and a reserve for three more seasons….steady performer and a Dodger throughout his career…3 time all star and improved as a fielder after a inglorious start….Had 194 career post season at bats…Became the Dodger manager for three years 1996-98….had a 173-159 record as skipper….Bleeds Dodger Blue.

Given his long career Bill is pretty well covered in the blog world.  Read more about Bill on the 1973 blog: http://1973toppsphotography.blogspot.com/2012/01/replacement-for-two-hall-of-fame.html 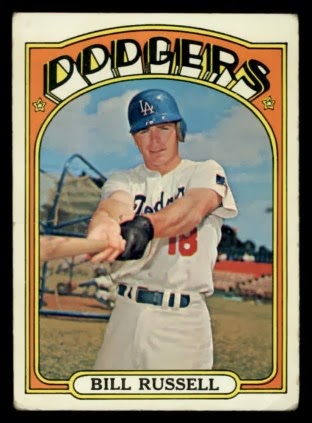 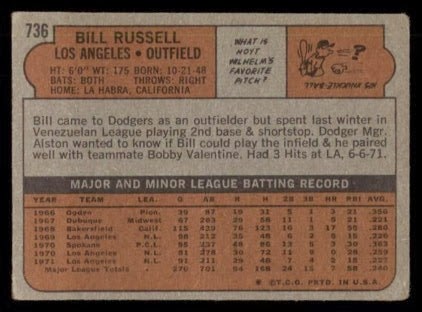 Email ThisBlogThis!Share to TwitterShare to FacebookShare to Pinterest
Labels: Dodgers

Two words:  Inconsistency and Controversy can summarize Randle’s career…His legacy are two events one infamous, one funny…The infamous:  Hitting manager Frank Luchessi during 1977 spring training…the later was a much viewed unsuccessful attempt to blow a bunt foul while playing 3rd base for the Mariners in 1981….Didn’t work but it was creative....Once again here's a guy in a uniform…sporting a red cap sans insignia of the departed Senators…Len or Lenny Randle was part of several varying for an infield spot in the Senators/Rangers transitional years….competing were vets Tim Cullen, Ted Kubiak, Dave Nelson, and rookie Vic Harris..Did best when manager Billy Martin took over the hapless Rangers in 1974 hitting .302…After 1974 breakout year Randle’s career was notorious for ups and downs…an up season would result in .270-.310 BA…a down year was sub .240 followed usually by a trade…Much shuffled was part of 5 transactions in 7 months in 1979….After his MLB career was over he played in fledgling Italian baseball league…this story was chronicled on the CBS news program 60 Minutes…from all appearances he found an inner peace overseas…A first round pick out Arizona State University…never played below AAA level. 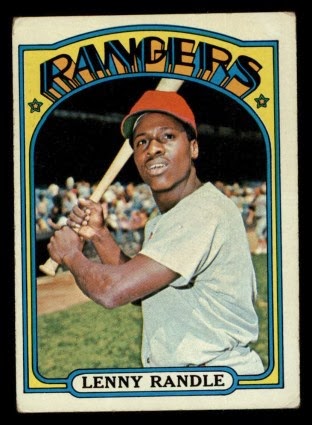 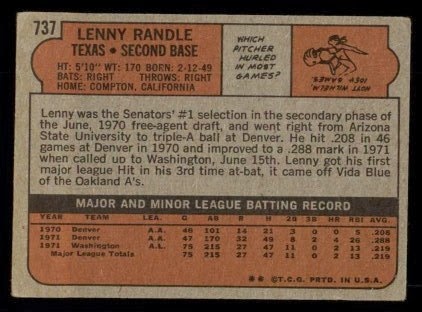 Posted by Douglas at 7:33 AM No comments:

This somber man, never sported a smile in any know photographs…In this spring training picture is no exception... experienced a tremendous come down in 1971…Oh what difference a year makes…In 1970, he a vital cog in the 102 win big red machine the seemingly invincible team until the WS….a 20 game winner and 4th in NL Cy Young voting and 12 complete games….then the crash of 71, as Merritt’s  record collapsed to 1--11 with no complete games ….Similarly the Reds fell too losing 23 more games to a sub .500 79-83 record….Merritt cited arm troubles that developed in 1970 (sound familiar Wayne Simpson?)…argument could be made for this…several late season starts were shaky and the exceptional Reds run support of that year covered up this fact…While Merritt’s ERA increased to 4.37 in 1971 (same as 1969 when he won 17 as a first year Red) Reds run support dwindled to 2.3 runs per Merritt starts..Was 0-11, when he won first game pitching 5 inning of relief on August 21… In 1972 Jim primarily languished in AAA in an unspectacular effort and appeared in 4 games in a Reds uniform…Next season was acquired by Texas and given 19 starts…had an excellent July, 5 out of 6 starts were complete games…but a losing record at 5-13 however his ERA that year was better than his 20 game win season...Started with the Twins organization and won 37 of 78 decisions with 3.03 ERA…traded to Reds for Leo Cardenez. 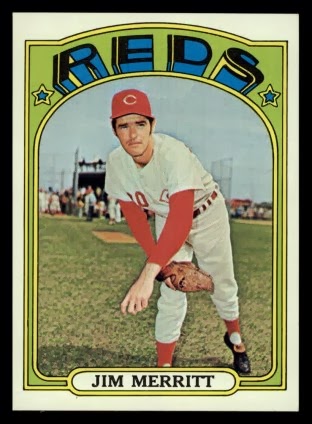 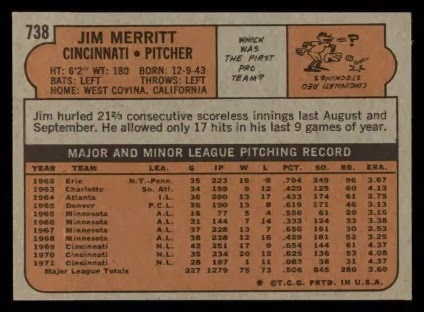 I can’t say much about Don Mason…he was weak hitter on weak hitting San Diego squad (although not the all time franchise worst)… inexplicably got considerable of playing time at 2nd base with Padres in 1971 a team that decided hitting or wasn’t needed in the game… The stats explain how that turned out teamed with Enzo Hernandez they had 893 AB resulting in a combined .217 avg. and 23 RBIs…. how's that for middle infield punch? … fielding  wasn’t required either for Don was third in NL 2nd baseman errors despite only 90 games …Was signed by the Washington Senators and picked by the Giants for the 1966 season by the Giants…Rule 5 draftees are required to stay on the big league club for the year following the draft…Don rarely played and hit .120….Highlight of the season was hitting a home run for the solo run in 12-1 slaughter of the Giants by the Reds…Given Don was hitting .070 at the time, maybe some sympathy by opposing team was in play… after 1971 made super rare cameos in a Padres uniform the next two season garnering 20 AB….In my research, however I have come to the conclusion that Mason has been the least productive last name in baseball history…Don and his 3 hr, 27 RBI, .203 avg, Ranger/Yankee Jim Mason 1584 AB .203 avg. are the pillars to support my case …please write and post if I am wrong 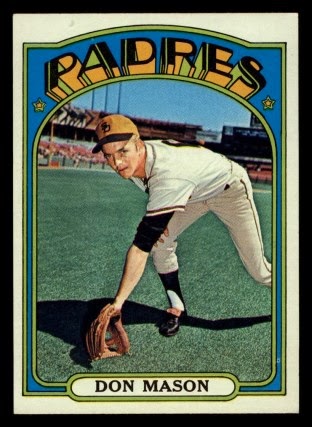 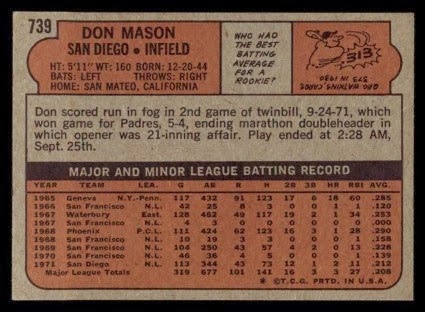 A narration of the back of the card could read like this…1970  batting champion (with .366 avg the best figure in either league since the 1950’s and the best figure in the NL for 50 years)….1971:  On disabled list and out for the season… One of two stars that sat on sidelines in 1971 the other being Bobby Tolan…AKA Beeg Boy…when healthy was one of most dangerous hitters in either league…problem was good health wasn’t that often…that coupled with poor fielding and personality clashes with teammates hampered his career…1972 Carty was trying to come back from his injuries from the year before which hurt production…Atlanta lost favor with him in during the season…It is chronicled in the February 1973 issue of Baseball Digest that paints a less than flattering picture of the man…Shipped to Texas to coincide with the onset of the designated hitter in 1973…Seemed like a match…Didn’t respond well and shipped about both leagues during season hitting .229 with 3 teams…Went to Mexican league and was re-discovered by Cleveland late in 1974 season…Career resurrected…hit over .300 for both Cleveland and the Braves over 4000 ABs and a decent stint with the fledling Blue Jays…Later in his career he hit more for power than average….not sure about his popularity however. 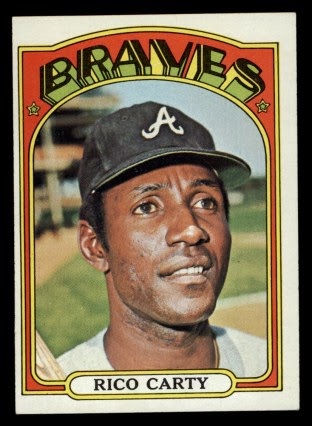 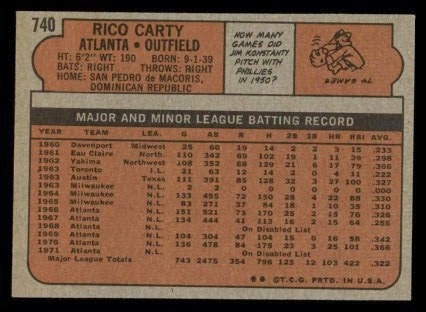 Posted by Douglas at 6:19 AM No comments:

The theme is first baseman…sort of, they were not exclusively 1st baseman all also roamed the outfield……all the players shown here had fair MLB careers...no superstars but all in the pension plan… Tom Hutton had the best MiLB stats, having been a two time Dodger system MVP hitting .352  for the Dodgers Spokane affiliate…As a big leaguer, never achieved regular status but was handy reserve…Maybe most famous for marrying teamate Dick Ruthven’s twin sister…being traded to the Phillies ended 6 years of being AAA farmhand... Was traded for Larry Hisle... John Milner had the best power of the trio…was considered the deep threat on 73 Mets team who small balled into the WS..made the Sports Illustrated cover with Bert Campanis in a bang bang play at 1st (see below)…..led the Mets in homers three years in a row until King Kong Kingman came along…played about half of his career in the outfield…typically changing every couple of years…10 career grand slams…became more of a sub as he finished the end of his career in Pittsburg and Montreal…Rick Miller was the least a first baseman…did not play the position in the minors not in the bigs until 1983 at the end of a 15 year career… Had two long long terms in Boston with a three years in California sandwiched between…his time for the Angels was a close he’d come to being a regular…A .269 hitter who usually hit line drives…Known to a good glove man receiving the Golden Glove award in 1978 …Miller was usually next Milner alphabetically but they were different players… In 4440 AB had 28 homers total. Milner 131 in nearly 3400.. Played majority of career with a mustache…Miller's first and last season he hit .333...(My Rick Miller memory:  at the 1979 Twins home opener Rick hits a sharp but routine single to CF Willie {Dr. Strangeglove} Norwood, the ball goes between Norwood's legs to the center field wall.  Miller rounds the bases to score  It is scored a single with a E8 on Stranglove, no earned run or RBI)...thanks for the memory Willie. 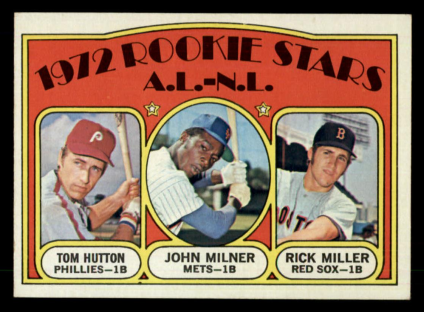 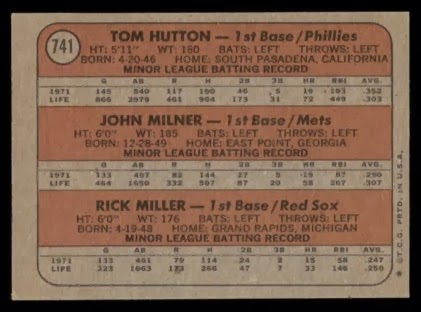 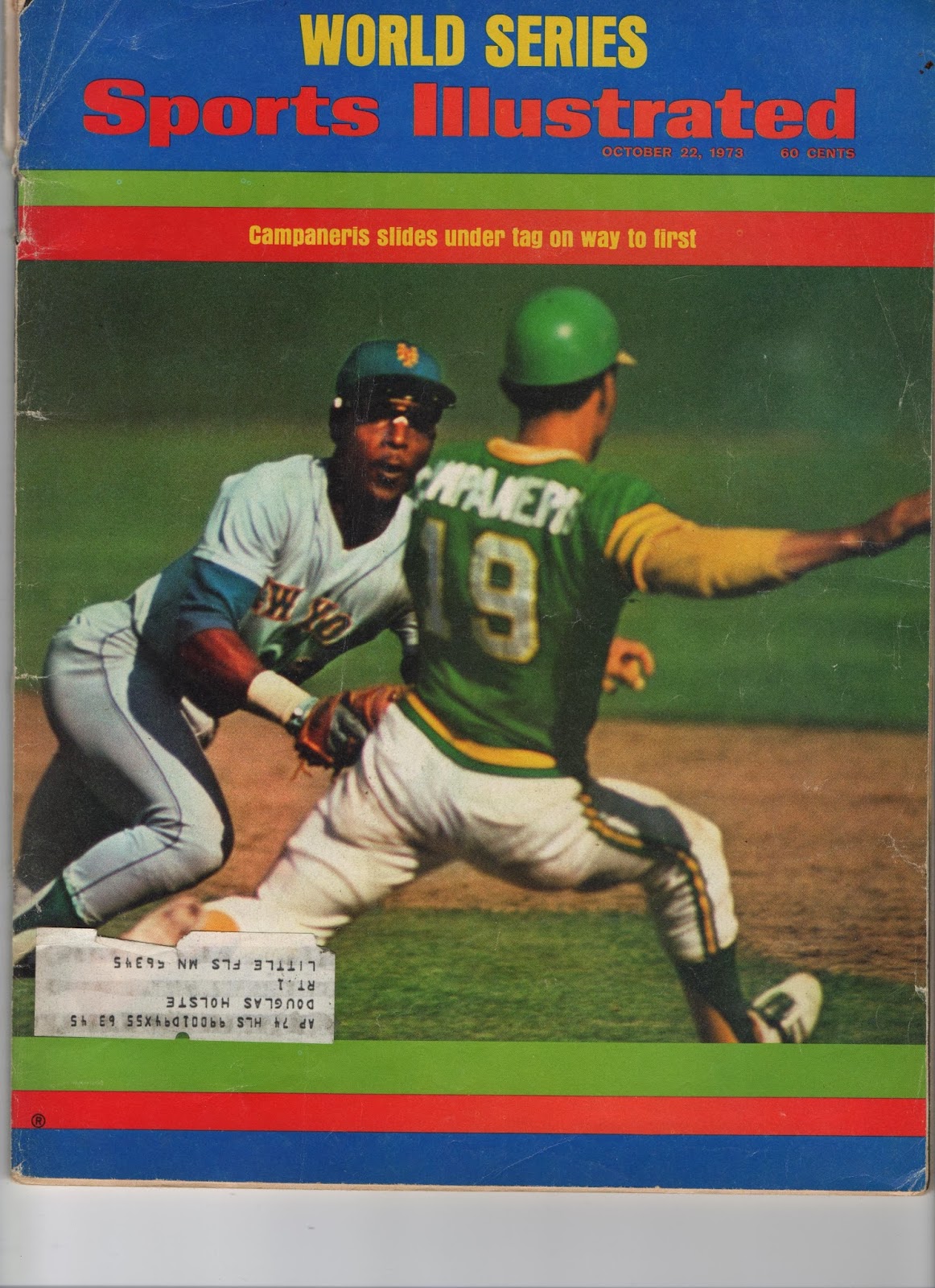