Achieved a first within the Brewer franchise whose accomplishment is more significant every year...first Milwaukee pitcher to win 20 games in 1973....since then only twice have others achieved the same mark...started with the Cubs...used very little...thrown in as an add on in trade with the Brewers...scored big dividends exceeding expectation by going 7-7 in 1972...spearheaded the pitching  staff with a 20-7 record on a Milwaukee squad that improved by 9 games....following 3 seasons Colborn returned to earth, averaging 10 wins per season....found short lived rejuvenation with Kansas City 1977....won 18 as the Royals cruised to their second straight AL west title...added a no hitter to boot...did not pitch in playoff despite record....bottom fell the following year...split season with Royals and fledgling Seattle Mariners....won 4 and lost 12...Stayed in baseball in multiple roles...most overseas managing in Australia and scouting Asian countries. 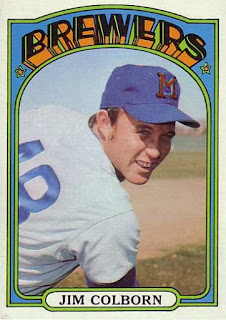 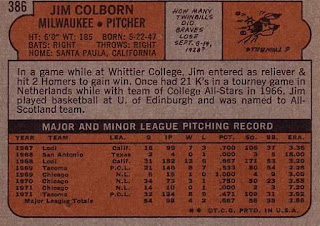 Posted by Douglas at 6:22 AM No comments:

His name identified with the Yankees as their years of dominance were ending...was the feeling at the time, and still lingers to this day....Case in point:  ”When the Yankees Were on the Fritz:  The Horace Clarke Era” is the title of a book written by Fritz Peterson...such comparisons were unfair because the Yankees had so many holes in their lineup at the time that put them in unfamiliar second tier status...Third base position in the time after Clete Boyer and before Craig Nettles, Catcher in the time after Elston Howard and before Thurman Munson, Right field at various periods were more to blame....in the prime of his career, attributes were durability, excellent strikeout and stolen base ratios...debuted in 1965 and was up and down with the big club and farm system....firmly established as a part time shortstop 1966....took over as the regular 2nd baseman thereafter from 1967 to 1973...best year 1969 when he hit .285...took a backseat in 1973 with the acquisition of Sandy Alomar....hitting dropped and sold to Padres two months into the season....no resurgence occurred, hit only .189 and released immediately after the season....consistent  and durable player....Led AL in at bats two years running. 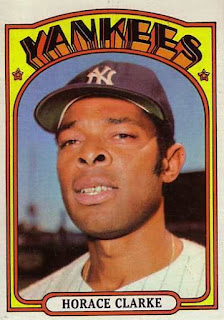 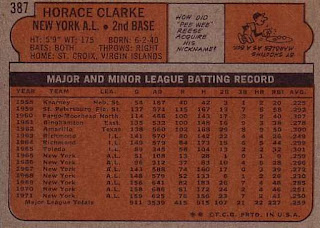 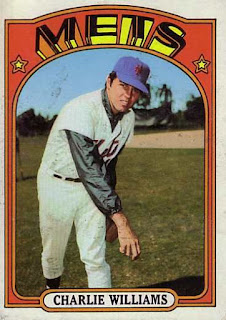 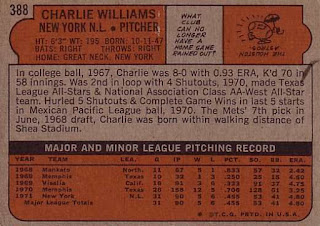 Posted by Douglas at 6:29 AM No comments:

Assumed the role of manager over for 17 consecutive seasons serving three franchises...best mark at the time next to Walt Alston....Twins were his 3rd club....Was a player in NY Giants organization....and regular for a couple of seasons...eventually lost playing and was offered the skipper spot in the Giant’s AAA team in Minneapolis...won the league championship in second year....earned the dugout executive spot for NY Giants 1956....two losing records despite the return of Willie Mays...Went west with the team....More success came with the emergence of young new talent; McCovey, Cepeda, F. Alou....unfairly, despite winning record, was dismissed midseason...took his talents down US Highway 1 to expansion Los Angeles Angels....the typical rocky first year struggles blossomed to an exceptional sophomore season...based on strong pitching finished third with 86 wins....a high point...continued for most of the 1960’s....his 1970 season was the only one to make postseason although the Twins were easily shot down in flames by the Orioles in the ALCS....Breakdown in pitching and injuries eliminated subsequent the 1971 edition of the Twins...fired mid 1972....took on Bay Area scouting...brought back by Giants for 1976....met with very little success with a 74-88 season...A glib and talkative story teller who also suffered stomach ulcers 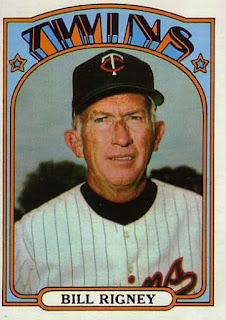 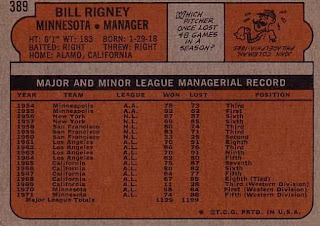 Posted by Douglas at 2:42 AM No comments:

Gee Willie,  I can hold two baseballs at one time too...hard to figure out the situation the photo was taken, was the picture was in-action card or taken during batting practice....my guess is batting practice because of glove on the ground)....Now getting back to the player....was fixture in the Dodger outfield for most of the duration of the 60’s and early 70’s...started regular work mid 1961 but had a bit of an uneven career until 1969...brought speed, good power....fortes were extended hitting streaks (separates ones of 31 and 26 games) triples, twice led NL and once hit 26 in the minors.... won Gold Gloves twice but was know drop too many fly balls....made 3 errors in one inning during game two of 1966 World Series....exceptional seasons were 1971 and 1973 were he captured all star berths...despite his above par efforts of 1973 was traded in the off season to Montreal....put up better than average numbers for the 1974 Quebec squad but subsequently toiled in light of multiple  changes of scenery...played in  Texas and St Louis the following year....then in 1976 wore San Diego Padres Brown and Yellow, which was Willie’s last full season....continued to work going to the far east (or is it west) to the Japanese leagues....tried to come back for a short spell with Angels 1979....last season was spent in Mexico 1980....highly conscious of his batting stance and was of the most physically fit players in the league.....passed away in 2010. 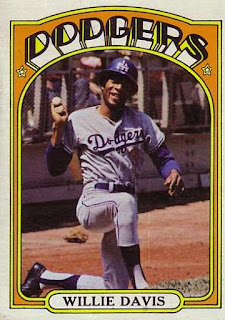 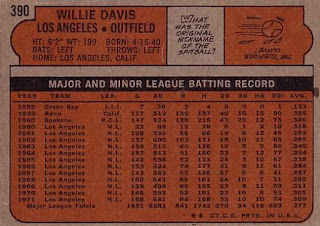 AL fireman of year 1971....the pinnacle peak of up and down career....led AL in games, games finished, and saves...Milwaukee years were an island of stability and minor stardom in a sea of vagabond-ish fate....Started with KC A’s...first full year was strange, drafted by Red Sox and then returned mid-season to KC....appeared in 62 games, good for 6th in AL...then returned to A’s minor league system for three years, surprising given the increased demand for pitching due to expansion...Big break came in 1970 as he was added as a throw in a trade to the Pilots (not yet Brewers)....Still started in AAA but was very effective in the PCL and earned a call up...not missing a beat, established himself as the top closer....After the 1971 season, success was more elusive, but still was leading Brewer fireman in 1972....An offseason trade to Phillies lasted all but a month (did not stop Topps from put him in an Airbrushed Phillies cap for 1973)....shuffled to Twins and washed out...put up on waivers mid season and picked up by the Indians...salvaged the season with the Tribe....reencountered problems similar to the year before in 1974, a poor start, released, picked up (by the Mets) with better results...was able to stick around, putting in stints in California, New York (Mets), and Kansas City ending in 1976....lives in Milwaukee and worked in real estate....his 77 finished games in a season is presently the 4th best all time mark, next to Mike Marshall twice, and Billy Koch. 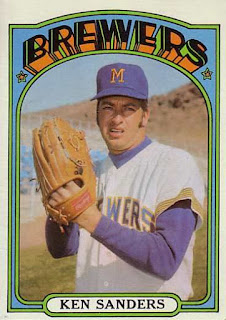 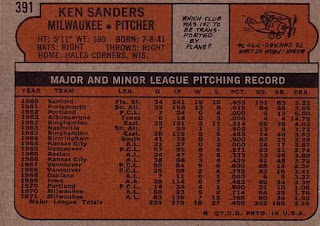 Posted by Douglas at 5:33 AM No comments:

Email ThisBlogThis!Share to TwitterShare to FacebookShare to Pinterest
Labels: Brewers, fireman of the year, Ken Sanders

Two Pirates with divergent paths....Cambria is just a foot note having seen all the MLB action he would see by the time this card came out...marginal AAA player at time and declined further in 1972....finished with a 1-2 record in the bigs....Richie Zisk was to become a distinguished slugger in both leagues for over 10 campaigns ....stayed in minors 1972 soreal chance came in 1973 as he was pressed into service with the tragic loss of Roberto Clemente...acquitted himself well hitting .324....was able gather 100 RBI in second season.... 1977 traded to join Chicago’s Southside hitmen....output was 30 home runs, 101 RBIs....Joined Texas and took the free agent money...did OK but maybe not up to expectations....after three years in Lone Star State, took his bat to the Pacific Northwest....staged a slight comeback in 1981-2...hit .242 in 1983 and was released thereafter. 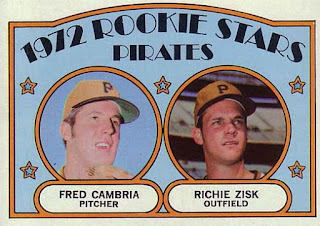 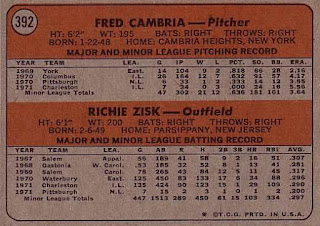 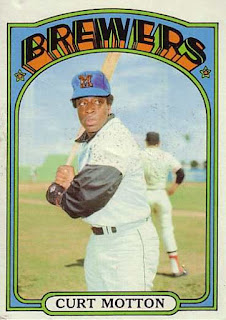 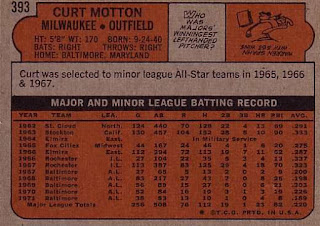 Posted by Douglas at 6:33 AM No comments:

Another brother act.... eventually....Ken secured a starting spot with 1971 Astros....Brother Bob would eventually surface in 1974....the only brothers in MLB history to both throw no hitters....an odd career  after a late season call up in 1970 began as a starter for three years....took a four season exile to bullpen....returned to starting in last portion of career and had the best returns....played 11 seasons in Houston then three full ones and two fragments of seasons in Anaheim....never a big winner, topping out at 13 victories in 1982....finished with 114 wins, 113 losses, in 521 games...decent 3.37 ERA mark....never the less made two all star teams something Bob never did who once was a 20 game winner....went into Houston Astro’s front office after his playing days. 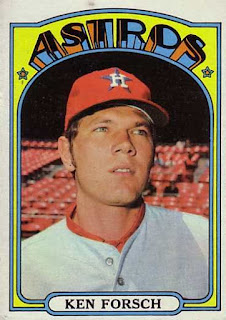 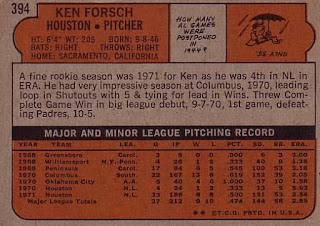 Posted by Douglas at 3:09 AM No comments:

The middle brother of the three Alous ....Coming off his all around best season where he showed greater pop (6 homers) and more RBI production (72) than ever before....Famous early for having two brothers on the SF Giants...performance was definitely inconsistent hampered by injuries and sibling or superstar competition...it wasn’t until a trade to Pirates that Mateo made his name....1966 astounded the baseball world with a .342 best in NL....the cause was totally new batting approach that emphasized choking up on the bat, hitting downward, and bunting when needed....next 3 seasons more of same, a .330+ average, finishing 3rd, 2nd, and 4th in successive years...1969 was especially effective leading the league in at bats, hits, doubles plus was starting all star....1970 BA dropped to .297 a figure still very good for most....still led NL in at bats....hit .307 in 1972 splitting time in St Louis then Oakland....Traded to Yankees for 1973 where he hit .296 good for 10th place in AL....made a brief return to Cardinals at the end of season addition for an intended playoff berth....1974: sold to Padres but could not get untracked and was released mid season....finished with a .307 lifetime BA....passed away in 2011 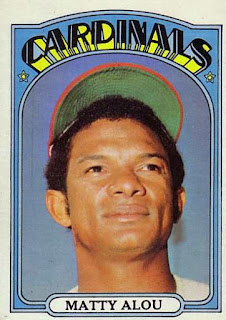 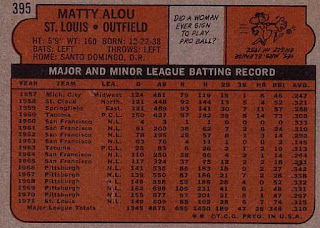