Good field, no hit again here, but when it came to offensive skills Pat made Tim Foli look like Ty Cobb…Pat’s stats were not impressive in 1971…40 games, 94 AB, 17 hits, 0 HR, 6 RBIs, .181 BA…Given Career stats were not a huge improvement 4Hrs, 54 RBIs, .216 Avg….Never was a regular at any one time…best was his stint in Philadelphia appearing in 63 games and 205 Abs taking place in 1965…Was a fair player at the AAA level hitting .271 in 1667 Abs during five different occasions…Went from Philly to St Louis then to Cincinnati…with Reds any chance of playing time was stifled by Johnny Bench…traded to Padres mid 1972 season effective pulling him out of AAA…didn’t hit any better in SD…His time in the mustard yellow uniform made for a dramatic photo on 1973 card a collision with Fergie Jenkins at home in game played on 6/14/72...Jenkins was out... Despite the agony depicted, Corrales played the rest of the game until being taken out for a pinch hitter in the 9th…Like most back up Catcher’s career path became a MLB manager…Took the helm for Texas, Philadelphia, and Cleveland encompassing parts of nine seasons. 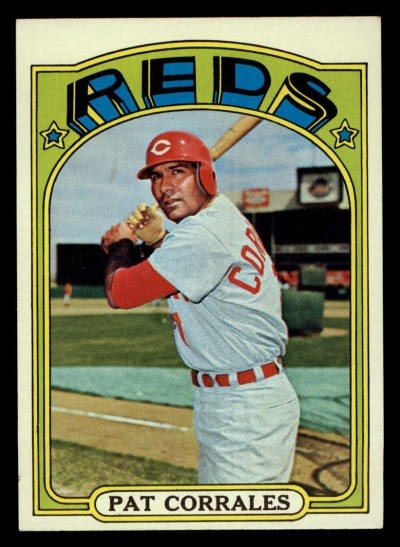 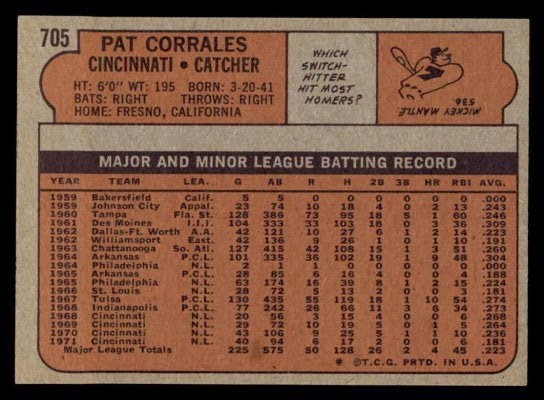 In action:  Why Topps? Why?...Statistically speaking probably the least deserving player of in-action photo card ever…even the picture is awkward with his mitt is off his hand as if to say “Ouch!  that pitch was too hard”...most likely show the ump the ball… Given his 1971 stats the photo represents rare footage…hit .191 in his MLB career from then on. 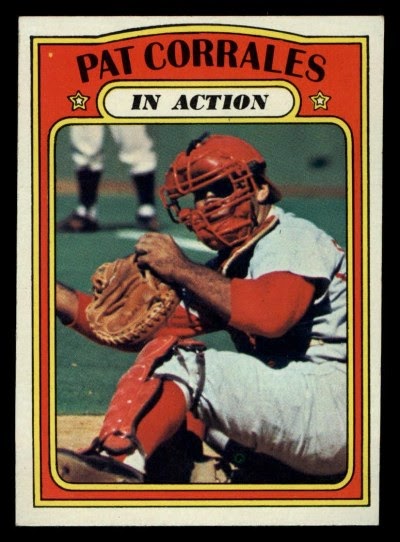 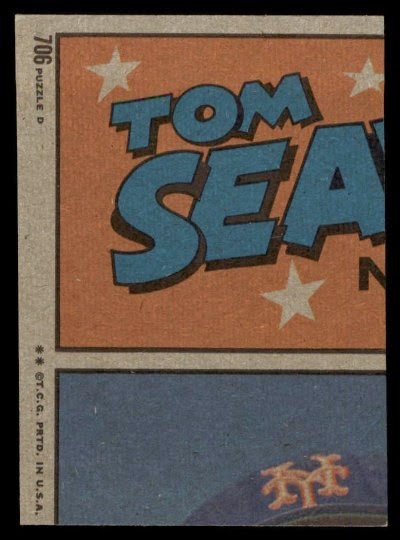 Special Note:  Pat could of had more playing time if this guy pursued this career...https://www.youtube.com/watch?v=sKKQLJWcwBs

The card backside tells the story…Traded to Expos by the Mets on April 6th,  9 days before strike postponed 1972 season started…the versatile infielder became a regular in Montreal’s infield for six years…Represented the Expos' movement to replace the expansion draft players obtained three years earlier…Had a 16 year career of many adjectives, tough, scrappy, combative, and generally popular in his 6 big league stops along with playing for Mets and Pirates on two separate occasions…displayed excellent bat control but this didn’t equate into walks …. little power hit only 25 HRs in 6047 ABs…Best season was 1979 with 1 Hr, 65 RBIs, and .288 average for Pittsburgh…had an excellent post-season in the Pirate’s championship run hitting .333 in both NLCS and WS…MVP honors were taken by Willie Stargell on both series…Good range, good glove mostly at shortstop…First pick in 1968 amateur draft…a draft that produced Thurman Munson, Greg Luzinski, and Bill Buckner but no HOFer’s….Also had stints in San Francisco and California...Wore glasses for most of his playing days…finished with a .251 career BA. 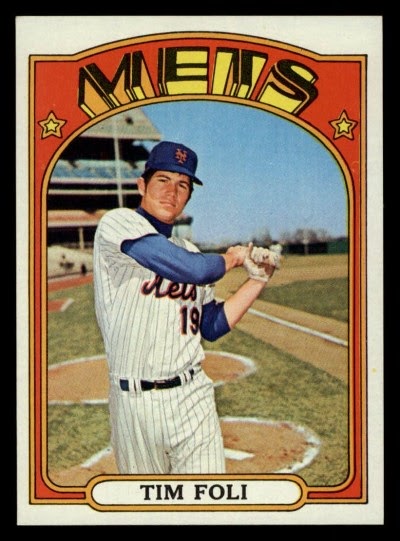 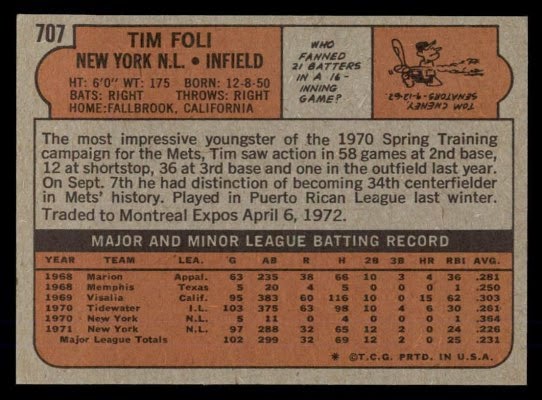 In action:  Tim, without glasses, awaits a ball.  Not much else can be determined.  My gut feeling is that the photo was taken during between inning infield practice based on his pose. 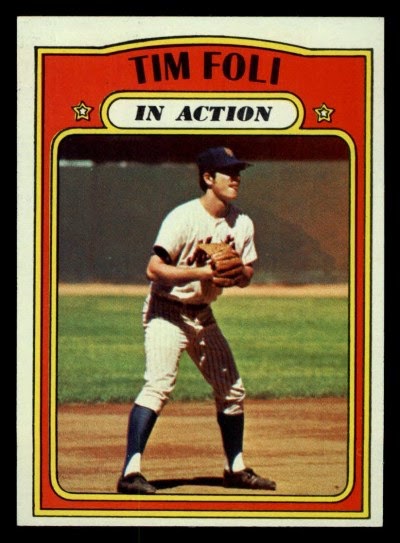 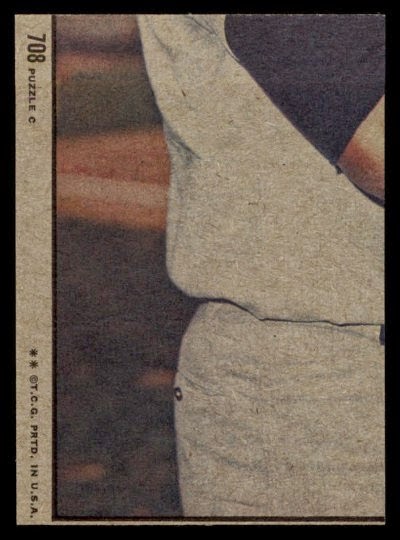 But if a person likes in action card detective work try this site:
http://www.hardballtimes.com/tht-live/a-baseball-card-mystery-tim-foli/

Posted by Douglas at 8:54 AM No comments:

The bastion hurler of the first 15 years of Twins existence…Holds the Twins team record for Wins with 189…consistent averaged 16 wins over a 13 year stretch …Started in the original Washington Senator franchise….Once in Minnesota became a mainstay…Started 3 games in the 1965 World Series including the deciding game seven pitcher’s duel with Sandy Koufax…Came out on the short end of a 2-0 loss….Should have won a AL Cy Young award in 1966, leading the circuit in wins (25), innings, games started, complete games, least walks per 9 innings….problem was 1966 Cy Young covered both leagues and there again this guy named Koufax in the way…Next the year the award was given to pitchers in each league… coincidence?….Could do so many things well…won 15 consecutive gold glove award… A gamer....Good hitter for a pitcher, had .289 average in his injury shorten 1972…tremendous start that year going 10-2 in 15 starts and could have easily reached the 20 win plateau…revered in Minnesota fandom, but was somewhat mistreated by the franchise possibly because he was player’s union representative…inexplicably did not pitch in the 1969 playoff when the first two games were incredibly tight….equally perplexing was being put on waiver in mid season 1973 after winning 11…quickly and intelligently picked up by the White Sox…responded by two consecutive 20 wins seasons in 1974 and 75....Nice move Calvin!…A bargain!...moved on to the Phillies where he was resourceful…was 8-2 before the midseason break by virtue of a quick pitch that he before batters were dug in…after a few years made stops in NY and St. Louis as situational bullpen with a few spot starts…appeared in 63 games in the Cards 1982…got his only world series championship ring that year… incredible longevity 25 years…Note:  Card #714 show one of five career stolen bases…rare footage. 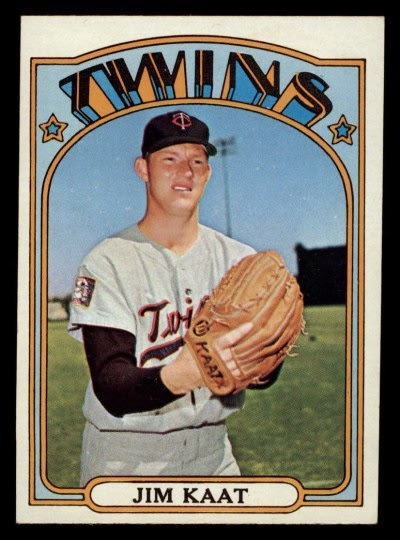 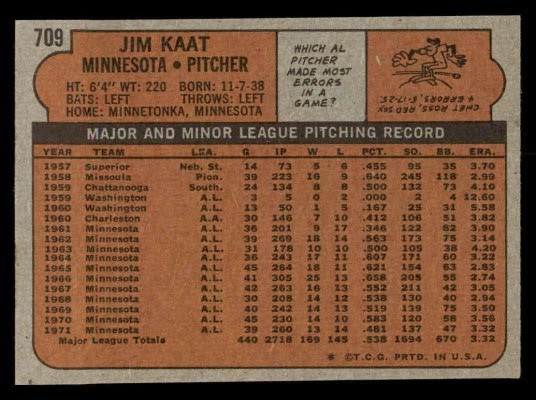 In Action Photo:  Looks like the same Twins-Yankee game in Gene Michael’s photo.  On back side, the right profile of some guy who played for the Mets. 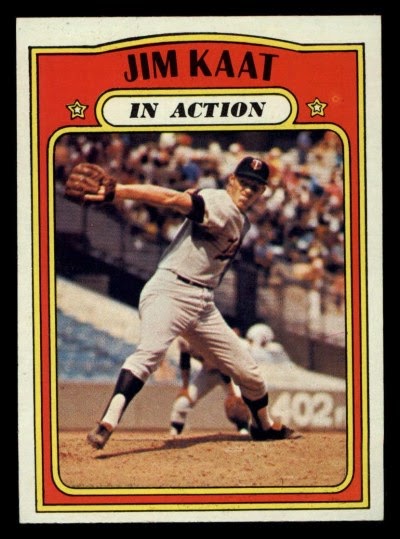 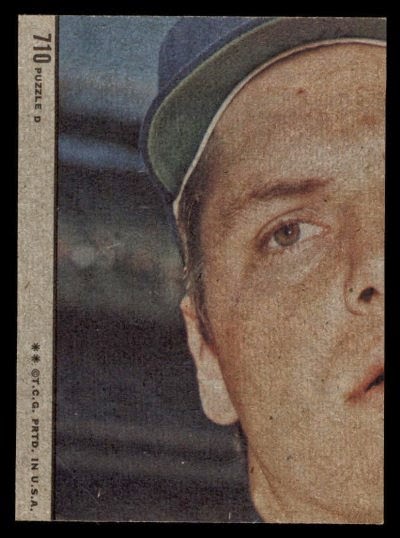 Combines Speed and Power unlike no one else did in 1971….HOF material if he could have hit for a higher average and skills not tailed off in his last 2 playing years…may have also suffered from playing at Candlestick swirling winds and poor conditions….tore up AAA Phoenix in 1968…Mid season call up and promptly hit a grand slam in first game and jelled well into the lineup… First full season, 1969 he socked 32 homers and led the NL in runs scored, making the bay area fans forget the decline of Jim Hart, the advancing age of Mays, and departure of Orlando Cepeda…mostly played leadoff which affected RBI total…Set records for leadoff home runs in a season and a career….Never achieved the first 40 hrs 40 SB mark but came as close as one can get with by hitting 39 HRs and swiping 43 bases in 1973…3 times all star and gold glove award winner…and 3 time most strikeouts…After seven years in Giant orange was traded to the Yankees….with this started a highly transitory career where Bonds averages a different club per season in his remaining seven years…best year in that time was 1977 for California Angels when he logged in 115 RBI’s..decline came quickly after trade to St Louis…finished off career in 1981 appearing 45 games for the hapless Chicago Cubs…worked as coach from 1984-1987….He and Barry hold virtually all offensive records by father-son duo in post steroid world….Died in 2003 not living to see Barry’s record....Career numbers, 7043 ABs, 332 HRS, 1024 RBIs, .268 AVG. 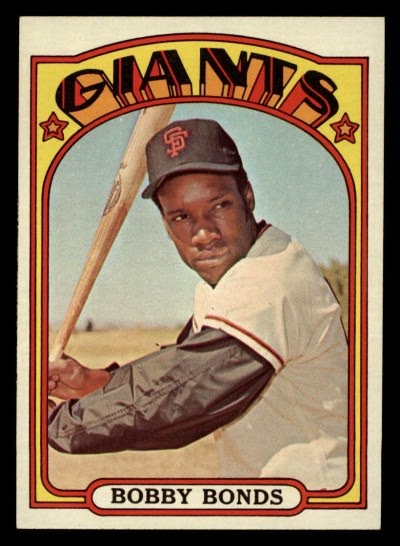 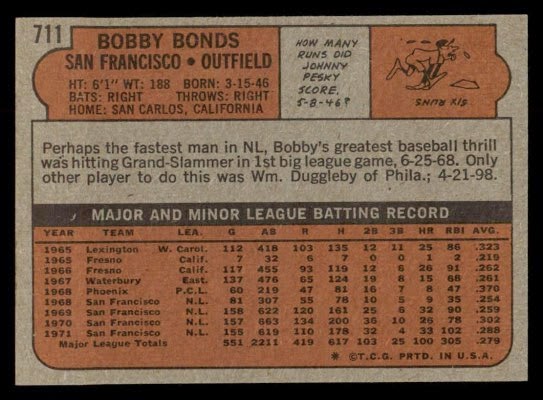 In Action Photo:  not much can be determined other than cream color uniform of the opposition is the San Diego Padres. Artificial turf is indicative of Candlestick Park... It looks like Bobby is laughing at himself for fouling off a pitch off that he could have driven into the construction zone of Candlestick Park. 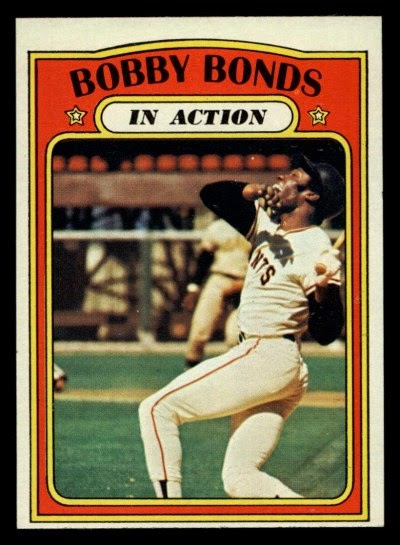 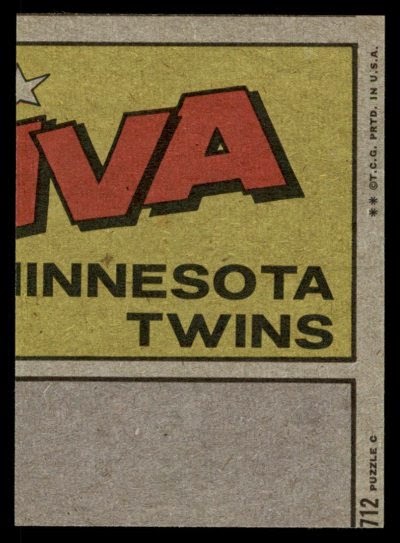 Posted by Douglas at 7:10 AM No comments:

The 700 In Action Series…The next 9 players have In-action card numerically next to their regular…It’s an odd lot of one HOF’er, never were’s, past prime, and part timers…extra will be said about the action photo…so here goes…

Stick...skinny as a rail...career shortstop…Started in the Pittsburgh organization in 1959...moonlighted a minor league basketball player...Got platoon work with the Dodgers in 1967 after a trade for Maury Wills...Had anemic offensive number and sold to NY after one season ...A fixture in the Yankee shortstop position since 1968 thru 1973…A weak spot for the franchise throughout the decade….good field, light hit reputation…had an out of ordinary hitting year with .276 avg in 1969…a feat he never could repeat as regular….had difficulty hitting above .230 otherwise….was replaced by Jim Mason in 1974…in reality Michaels despite his problems with the bat was a better hitter than Jim…became a Yankee organizational guy, twice being manager and general manager…Was skipper in 1981 but not the World Series...also managed the Cubs in 1986 and 87. 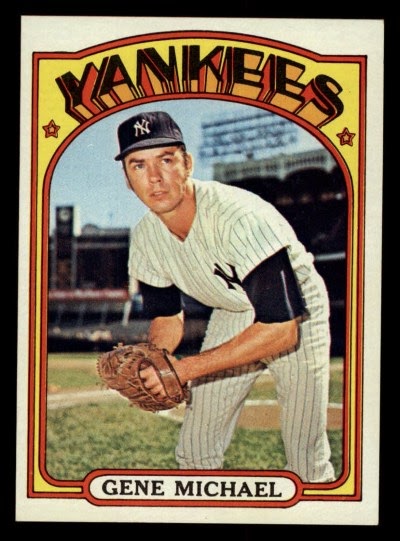 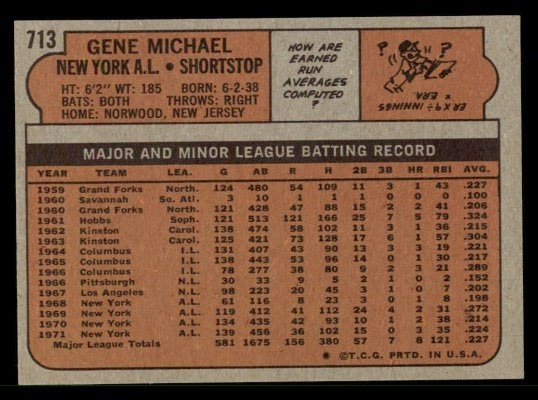 The Picture:  It’s not about Gene…it’s more about Twins pitcher
Jim Kaat who’s stealing second…. successfully…Guess pitchers were men back that then… the game was played July 21st 1971.  The steal took place in the 8th inning…. Twin broke a 1-1 tie in the ninth…a complete game win by Kaat. 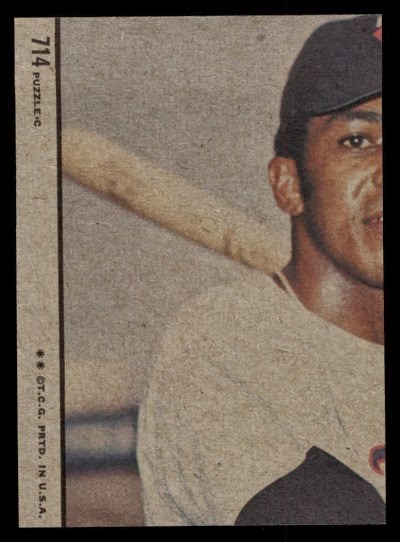 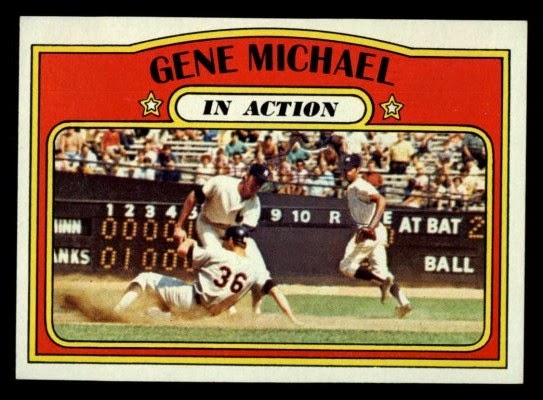 Back of Action card:  Left side of Tony Oliva’s face
Posted by Douglas at 8:47 PM No comments:

Big man, strong man, and according to Baseball Reference the nickname “SuperJew”…Great numbers in the minor and majors (at times) but failed to live up to expectations…Behavior and dedication were to be an issue, possibly attributed to a free spirit gained at U of California Berkley where he was also the football team’s halfback ….Won two consecutive league MVP awards and one minor league player of the year while with the Orioles farm system…Eventually got a late season call up by the Orioles in 1966… was given an opportunity for a starting gig on the ‘67 squad…balked at going to the minors after a poor start…staged a 19 day strike and promptly shipped to Siberia Washington…got playing time…Blossomed under the “Ted Shows How” era of 1969…1969 he hit 30 over the fence in the franchise’s first winning season…Magic faded the following year as did the fortunes of the Nats…A 20 point drop in average and a failure to drive in runs…It was almost repeated in 1971 aside from a trade to Oakland…Repaid the Nats by hitting 4 consecutive HR’s against them…Became part of the “Swinging A’s”…wore his hair long with obligatory mustche…improved during 1972 campaign, leading the team in HRs…went on total shutdown in WS going 0-16….traded to Siberia Texas in off season and career quickly sank afterwards… Was known for his considerable vocabulary. 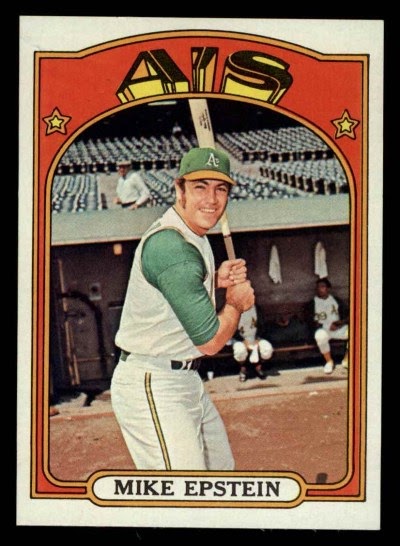 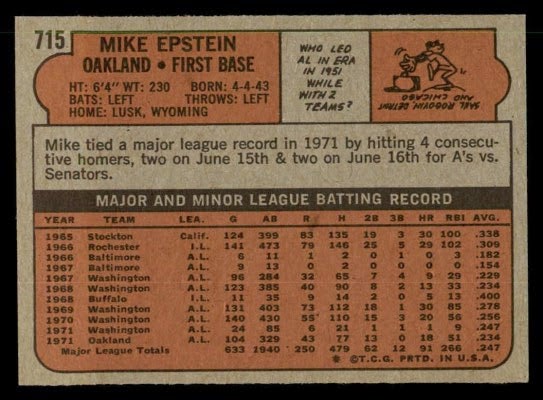 Let’s state the obvious…Member of one of great baseball families of all time, Jesus was one of the three Alou brothers…Jesus was tearing it up in the Giants farm system while siblings Felipe and Matty were on the big club….On 9/10/63 all three went down in order faced Met pitcher Carl Willey in Jesus’ MLB debut…On 9/15 the all played the outfield for two innings in 13-5 slaughter of the Pirates…With a long term prospect of an Alou outfield unlikely (two guys Mays, McCovey) the trio was broken upon Felipe’s trade before 1964 season…Jesus essentially replaces his brother in right field…Jesus becomes a fixture in the out Giant outfield until 1968 getting more playing time than Matty…Selected by Montreal in expansion draft…In convoluted move essentially he was traded to Astros before he donned the Expos tri-colored cap for Rusty Staub….played three years as Houston regular….1972 started a diminished playing role but suffered no decline in his hits-man-ship….Avg actually increased …Also the first player to use the name of Jesus which made some announcers nervous….line drive hitter who could over .290 and was virtually impossible to strike out…liability however was a lack of walks…Won two World championship rings with Oakland…returned to Houston after a two year layoff impressively hitting .324 in 1978….Became a coach the next but still got in some plate appearances....Has work as scout in Dominican Republic since he retired...Career figures:  32 HRs, 377 RBIs, and .280 in 4345 AB’s. 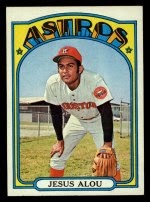 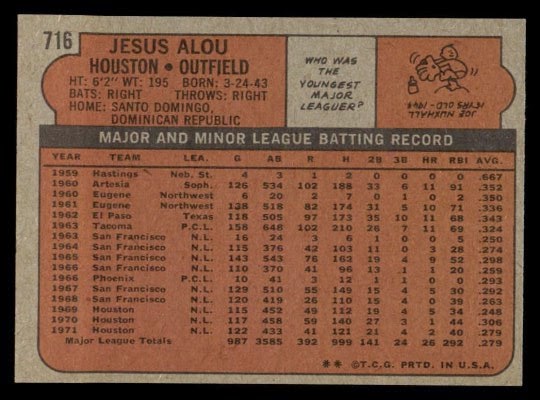 Posted by Douglas at 7:40 PM No comments:

Late comer to professional baseball…Signed by the Pirates near age 24 while pitching in a Pa. amateur league…At the time he was a science teacher at local high school…Made debut for the Pirates the following year…returned to the minors for 1968 and earned a second call up to the Bucs…up to that point had a 1.98 ERA in 41 big league innings….Became a regular reliever for the Pirates in 1969 leading the pitching staff in games…Did earn some spot starts in 1970 but ERA ballooned and lost out closer role to Dave Giusti… ….Subsequently shipped to KC as part of  the Fred Patek deal…Gained starter status with the Royals in 1971….Up to this point did have an impressive career win-loss pct; high water mark was July 5th when he was 28-11 in 324 innings pitched with a 3.31 ERA….The following 3 years alternated bullpen and starter….never was able to get 10 wins in a season…best season was 1974 with a 3.13 ERA in 175 inning…also led AL in wild pitches and HRs surrendered per 9 innings…a very poor start in 1975 resulted in trade to Atlanta…passable performance with the Braves with 3.41 ERA in 140 innings over almost two seasons…finished up with the ChiSox…career win loss was 51-49….was a coach in Braves system for 26 years starting 1982…Died from esophageal cancer in October of 2008. 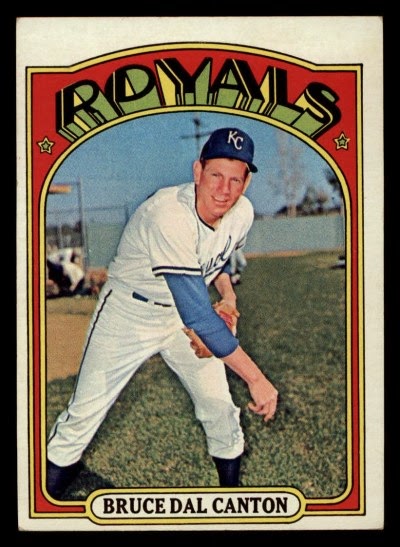 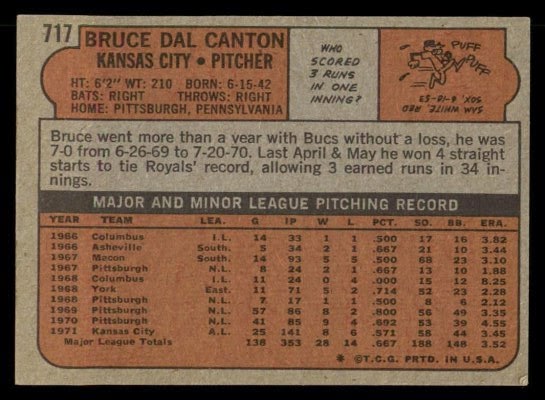