Unsung 1969 WS hero…. a secret weapon against the favored Orioles....facing the most potent lineup in baseball at the time, the rookie put a shut down on the O’s in a harrowing performance aided by two miracle catches by Tommy Agee and relief by Nolan Ryan...but game 3 conquest put Mets in control....native of Phoenix....born, raised, played HS, Community College and at the fabled player factory Arizona State University....Led Sun Devils to 1967 NCAA championship.....Unfortunately his WS win will always be a high point.....Won 13 in his first season and career high...barely above 500 win % in first 3 years.....Achilles Heal; owned a fiery temper which eroded the relationship between teammates, management, and fans alike....known for flipping his glove and angry stares to teammates on the field....despite having a break even year in 1971 he made progress with anger issues in a report per skipper Gil Hodges.....Gil would never live to see if his prediction  of progress would continue as he would expectedly pass away during 1972 Spring Training at age 47....Gentry's value dropped with a 7-10 record in 1972....traded and started a two season comeback with the Brave....Braves hoped for duplication of Nolan Ryan's turn of career with the Angels....They didn't get it ...fared no better only winning 5 decisions in a handful of games ....Braves released him mid 1975 season and signed by the Mets in a desperate hope of a comeback, but failed to register an out in only minor league appearance....steered clear of game in his day afterwards opting a real estate career in hometown Phoenix....When he was "on" drew raves from one opponent, Astro Jim Wynn, who said he had better stuff than Seaver. 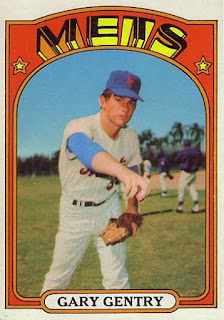 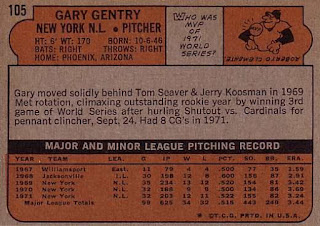 Baseball’s return to the once home of the Braves…recent residency was Seattle….this team would have started in 1971 but at the insistence of political figures in KC set the wheels in motion for 1969 birth….The prematurity of the Pilots resulted in a bankrupt franchise and one year stand in a city and facilities that wasn’t quite ready…franchise was snapped up by car salesman Bud Selig a few days before 1970 season….it is said the moving trucks from AZ spring training paused in Utah to receive the call to go Northwest or Northeast…as all expansion franchises of the time struggled no matter what locale….Brewers would not exceed .500 until 1978…at that point buoyed by budding superstars, the newly formed free agent market, and shrewd trades the team entered a competitive age that remained up to the 1993 season….the high points of glory included the 1982 World Series berth and ALDS appearance a year prior….Upon losing a slew key cogs the Brewers decline to sub .500 for 12 consecutive season….since then hit and miss; a few playoff runs but no return to the World Series…best chance was taking Dodgers to 7 games in 2018….A new stadium in 2001 was vital for survival in Milwaukee…. But still suffers from being in a small market, so free agents available need to be chosen wisely....The face of the franchise is HOF Robin Yount whose motorcycle riding exploits endeared him to the blue collar locals....Paul Molitor, Yount’s sidekick for many years would be second although many indigenous Milwaukeeans felt betrayed by his free agent departure....Remains to seen how long Christian Yelich will stay but he might surpass all other Brewers....to date team has had only one no hit game; Juan Nieves 1987. 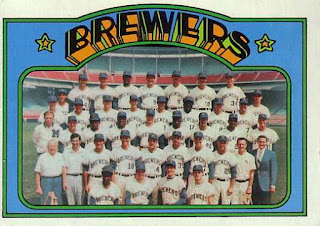 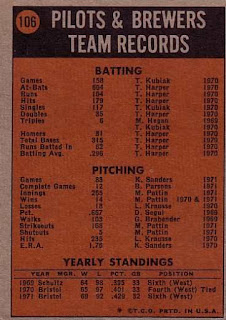 A bright future ahead….Like fine wine got better with age…..kicks his game to a new level once he donned an Astro uniform…Like the Alous brothers a decade later had two other siblings appear in the major league….Hector and Tommy….Jose, far and away is the most successful of the trio; tallying nearly 8 thousand at bats over 19 seasons….was still in a prime at age 38….after 3 ½ years of employment by the Cardinals, Cruz becomes another case of player being sold to another team who becomes far more valuable  than the original sticker price….Once again Houston struck gold again on bargain bin having acquired Joe Niekro the same year (although results were not immediate)….while cash is nice on a ledger sheet, it doesn’t win games or draw fans…..accolades includes two all star games and silver slugger awards….led NL in hits in 1983….wore the multicolored Astro uniform through 1987 when he was starting to show signs of age.....took a flyer and wrapped up playing career with a taste of AL action as a Yankee...a line drive hitter but was able to go yard on occasion reaching double figures in 9 campaigns and  culmatlative165 times total....such arguments are immaterial because Cruz body of work focusing on fundamentals and was hence a custom fit to the spacious Astrodome.....A serious, dedicated player with excellent work ethic....the marriage of Jose and the Astros continues into its 38th year as he has served in various functions, most recently community relations....Native of Puerto Rico...son had 12 year MLB career. 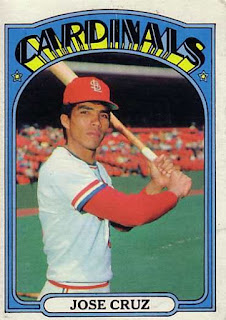 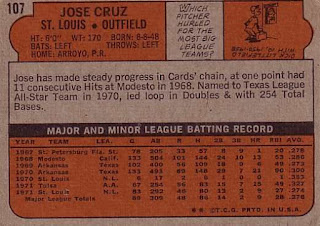 New England native, born and raised in Connecticut….Decent ERA for whatever MLB team he served with….but lacked the notoriety and the "wow!" factor that could have translated into a more significant MLB career…..sometimes the support cast wasn’t there like his time with the first year Expos….highlight of his mound vocation was a strong effort in a Red Sox uniform during the 1967 World Series…..8 1/3 innings pitched giving up two earned runs….His local background added excitement to the Boston faithful in the fall classic….In minors since 1960 sometimes with impressive victory totals namely 18 wins for AAA Toronto in 1966….In addition had 17 wins in a season combining time in Class A and AA….Other locales in the record books include St Louis (his opponent in 1967 WS), and Yankees.....second year in pinstripes was limited by injuries that took half of the season….last stop for the 1972 Oakland A’s  was a  case of non support…in 8 games went 0-3 despite a 2.04 ERA….Excluded from post season action although he was reunited with skipper Dick Williams from 1967….Final MLB line was 11 wins, 26 losses….forged a post baseball career in the insurance industry and still participates in 1967 Red Sox reunions….hobby during playing day was bowling.....turned into a golfer after his playing days were over. 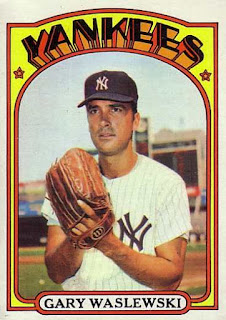 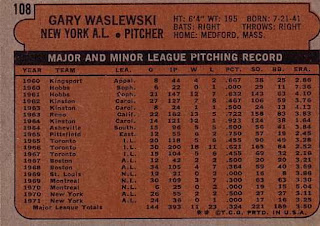 An enigma....not much is known…. exclusively a backup backstop…..talent summary: glove over bat…..came from a baseball family and took up catching when he high schools team was short in that position…..his fielding skill was kept him in the MLB…..got a new start in KC….Played enough to be considered the Royals main backstop closely followed by sometime outfielder Ed Kirkpatrick…..was crowded out as Kirkpatrick returned behind the plate in 1972….. Origins were with the Pirates….was given a shot at regular work after an impressive 1967…unfortunately his performance dovetailed in 1968 with .219 BA……relegated to being Manny Sanguillén’s back up from then on….as was the case in both KC and Pittsburgh a loss of playing eroded his batting average….hitting sank even further 1973, his last season….Released by KC, took a brief minor league assignment in the Pirate farm system and had a millisecond with the NY Mets….stayed out of baseball thereafter.....In 1996 May passed away as result of a farm accident.....A rotary brush cutter fell on him at his farm in Virginia. He had jacked up the machine to remove some wire that had gotten snarled in the blades, and the jack slipped…..reminiscent of Mark Fydrich’s death.… not much is known about May personal life other than he was married in 1963 and his game stats....one of six players with the last name May playing in 1971, joining Dave, Carlos, Lee, Milt, and Rudy. 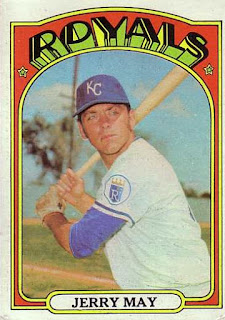 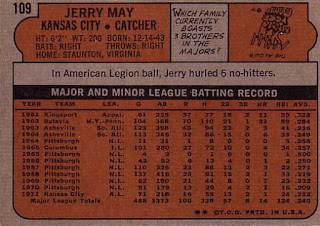