A once platooning first baseman for Twins was given more playing time.... for a while at least …Had a monster year in 1969 and but his numbers declined since then…As a whole his career alternated between Detroit and Twins…But mostly a Twin….First signed by the Tigers…taken by Twin after one year…coming a year later than Ted Uhlander, Rich gradually gained playing time at 1st base…Became a semi regular in 1968 essentially replacing a hobbled Harmon Killebrew….Harmon’s move, albeit temporary, to 3rd in 1969 paved the way to his career year….Hit .322 with 16 home runs, 69 RBIs in 419 At bats…Season highlight was hitting a pinch hit grand slam against Dave McNally to break his 17 game win streak on August 3rd…would have finished second in BA if he had 51 more At Bats….Got that bump in playing time during 1970 but production faltered namely his BA dropped by 60 points….The start of slide from which he never recovered…The organization’s realization that Killebrew’s 3rd base fielding was a liability brought the Killer back to 1st ,  largely cutting into Reese’s 1971 playing time….result was another large drop in BA settling to .219…same scenario was reprised in 1972 in a .218 BA but with a loss of another 100 Abs…sold to Tigers for 1973 but went .137 in 102 AB…released and returned to Twins for a swan song of nearly two dozen games…during his playing was Hamm’s beer sales representative in the off season. 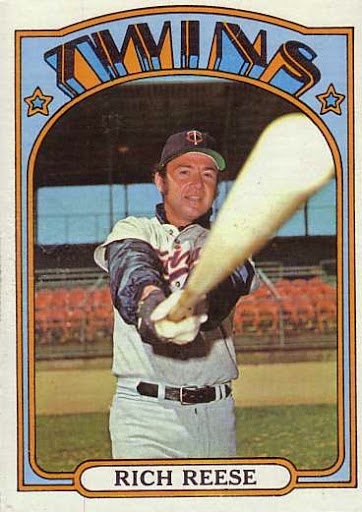 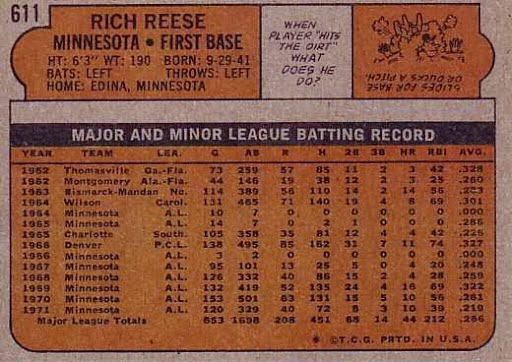 Part of the movement to bring youth to an aging Cubs pitching staff…never achieved regular status either as a starter or reliever shuffling between Chicago and AAA or AA farm clubs in four season…stayed the longest with the big club…Trade to Twin brought  him a place in the starting rotation…Responded with 10-10 record 1973….1974 was his career year winning 16 with a solid 3.29 ERA…bottom dropped out in 1975 when his ERA skyrocketed to 8.54 figure…won one game in season marked long absences…a comeback bid in 1976 fared little better…was released by Twins and picked up by various teams Tigers, Cubs, Mexico City, and Mariners all whom employed him at the AAA level with limited success…was able to work his way back to MLB with Seattle in 1979 for few games…only player in the 1972 set who played with the 1978 San Jose Missions….a notoriously bad team who this author saw as his first minor league game (see program below)...passed away in 2003. 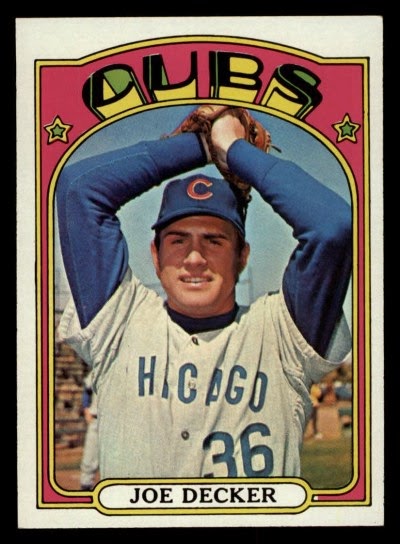 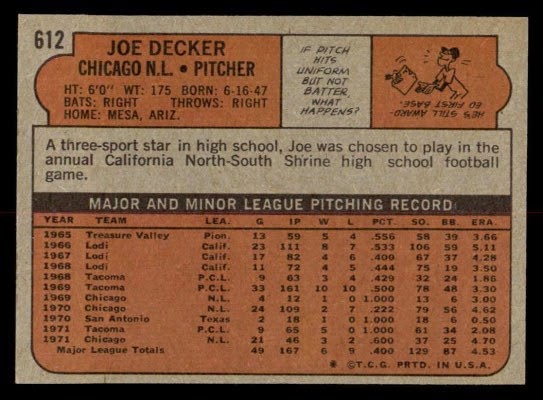 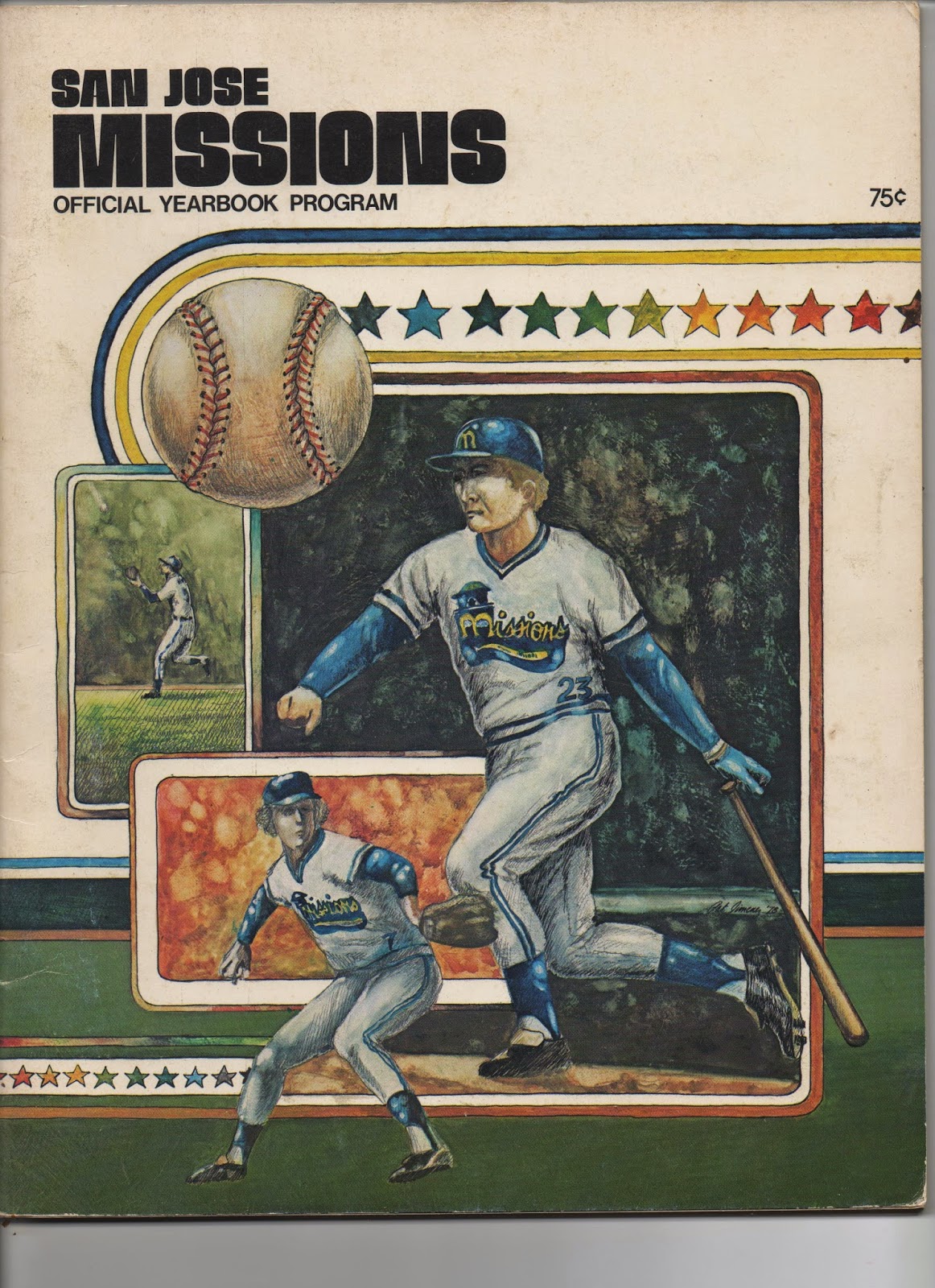 Almost 3 years removed from a MLB ballpark and given a shot for the #1 spot for 3rd base as the Brewers felt George Scott was more suited to firstbase….Last time he had played in majors was when the franchise had its year in Seattle…Went 0-4 in pinch hitting and was gone by the end of April….Traded to Baltimore where he never had a chance to displace Brooks Robinson…Spent his time at AAA Rochester….Line drive hitter, limited power…with Brewers hit above team BA with .255…However trade for Don Money took away his return…Traded to Twins and was out of baseball by the end of 1973....majority of his career stats were with the 1972 Brewers. 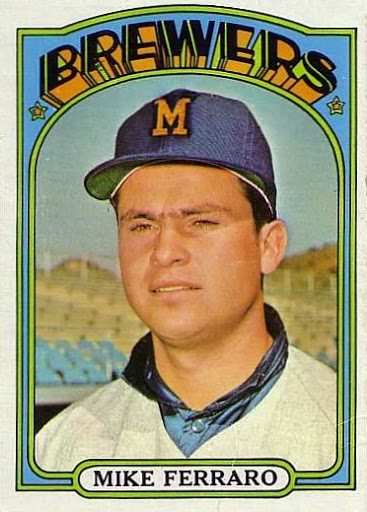 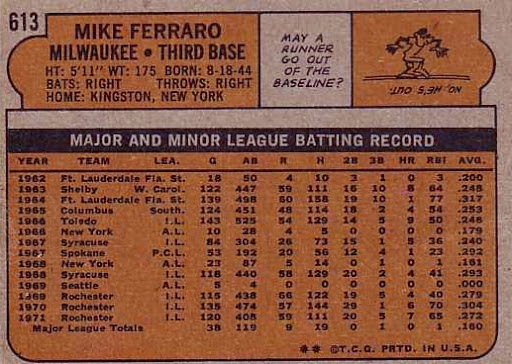 Email ThisBlogThis!Share to TwitterShare to FacebookShare to Pinterest
Labels: Brewers

Pictured here is a centerfielder coming off a very good season when most of the fellow tribe members had faltered around him....See #615 Steve Hargan… Started in the Twins organization….For a year and a half tore up PCL pitching while playing for Twins Denver farm club… 1966 First full season was a disappointment hitting 2 homers 22 RBIs and BA of.226… Once his rookie season was under his belt, Ted was a fine complimentary player with strong fielding skills who improved at the plate every season in Minnesota… also added some speed and some pop when he had regular work….Went to the tribe in a blockbuster trade with Cleveland that wildly favored the Indians….In two consistent seasons with Cleveland he did not lose stride….with the Reds in 1972 his playing time was almost eliminated and hit .159 in 115 Abs...did get in 6 post season at-bats…. Ironically as a career hit best against his team of origin the Twins 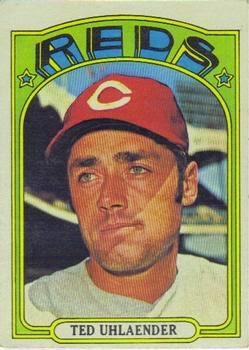 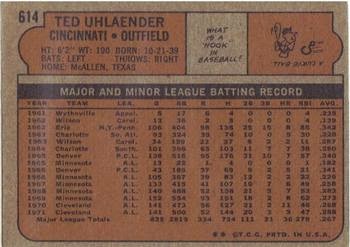 Posted by Douglas at 9:36 PM No comments:

The slightly dazed and confused picture belies an awful season of 1971…a career of large scale ups and downs…ended 1970 as one of the top pitchers in the AL …. in retrospect it was an island of success in seven years of futility….let’s start at the beginning….signed by Cleveland before the amateur draft….worked way up system….August call up 1965…held his own…in next two full seasons was able to achieve a total of 27 wins and maintaining 2.50 ERA….Arm troubles plagued the next two seasons and he lost 29 games and ERA was up by 2 runs a game…..then 1970 (see above)….The 1-13 record of 1971 was attributed to lame ankle robbing him of velocity….Worst outing was getting one out while bleeding 6 runs to the Orioles….Spent most of  1972 and all of 1973 in AAA  and did not wow anybody…Somehow, someway AAA manager Frank Lucchesi recommended him to then Texas manager, Billy Martin…became a reclamation project, similar to teammate Jim Merritt…responded with a 12-9 record for the resurgent 1974 Rangers….next two seasons were at .500 but ERA lowered each year… Bottom dropped out next year starting by being a surprise (to Steve anyway) Toronto Blue Jay expansion draft pick…drifted with three clubs finishing in Atlanta….Tried a 1978 comeback with the Twins organization who were looking for almost anybody to forget about free agent losses….Did not get past AAA Toledo. 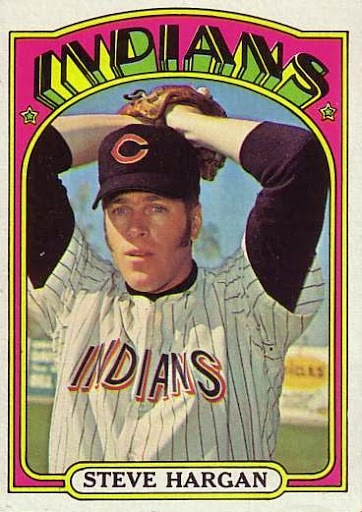 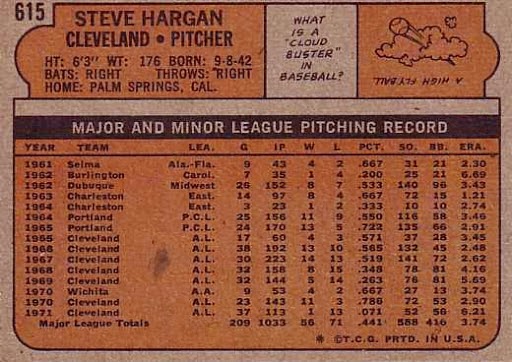 Posted by Douglas at 9:55 PM No comments:

Young man with classic 70's sideburns, looking to be part of LA’s youth movement…part timer in representing youth in the Dodger’s catching by committee in 1971….next season vets were phased out and started to share with Steve Yeager….an up and down pattern repeated for several years….Played in handful of Dodger games in 1972....First full season 1973 was his best 25 HRs, 88 RBI, .288 AVG…had trouble with hitting consistency afterwards….the crowding with Yeager did prompt forays in right field….had trouble staying above .200 in 1975 and 76….Trade to Cards was short lived…Experienced a mild comeback in 1977 with Astros….Another poor start in 1978 prompted a midseason return to the Dodger blue….was able to re-establish near 1973 numbers while reprising his C-OF designation…hitting woes returned in 1980 resulting in diminished playing time…was given his outright release in mid 1981…Signed by the Angels for extremely limited 3rd string work lasting up 1983. 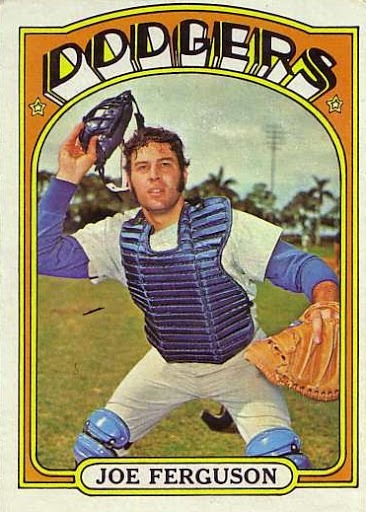 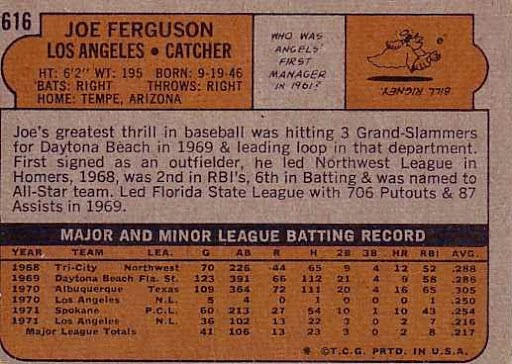 Posted by Douglas at 5:54 AM No comments:

Email ThisBlogThis!Share to TwitterShare to FacebookShare to Pinterest
Labels: Dodgers

The 1969 expansion upstarts were already 9 game above .500 and a nifty AL west second place finish in their third season…As of this date the KC franchise has a one game lead in wins (3528)when to compared to the other 1969 expansion teams…Next is Montreal/Washington with 3527…. Pretty close race going on for 45 years…The franchise’s secret early on was shrewd trades and overachieving draft picks…some trades were outright steals….Joe Foy for Amos Otis….Cookie Rojas for Fred Rico…In 1972 John Mayberry trade was added to the list bringing a consistent power threat....The pitching staff was solid but unspectacular and would get better…Team record wise all of the marks set up to 1971 marks have been eclipsed many times over…never the less good start KC and mixed result since…after this card came out the Royals have 8 post season appearences….one world series (controversial), two world series losses) and big 28 year gap between playoffs berths. 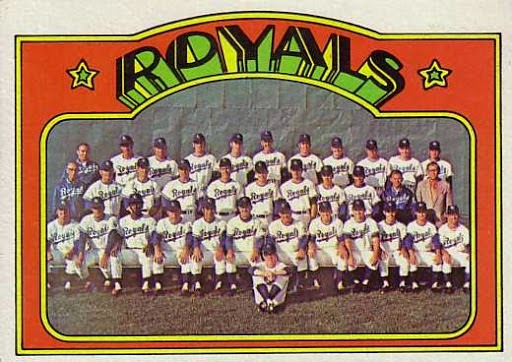 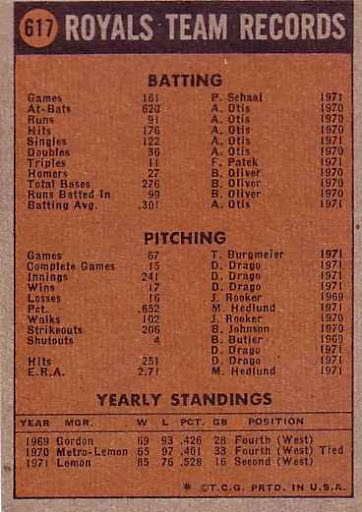 Posted by Douglas at 9:38 AM No comments:

Pictured in air brushed Sox cap, Rich already played last MLB game on 7/20/1971….Prior that time played for San Francisco…Card represents a very short period of time when he was on the White Sox roster…A history is as follows according Baseballreference.com.


February 7, 1972: Purchased by the Chicago White Sox from the San Francisco Giants.


Spent 1972 in AAA Richmond and quit after that…High water mark was 1968 when he won 18 games in the PCL…add two win in majors as late season call up gave him a combined 20 professional victories…Never the less, Rich struggled when called to the majors….Most prolific season was 1970 when he went 8-9 with 4.85 ERA….Had 26 starts that year…Career mark of 13-14 and 4.94 ERA. 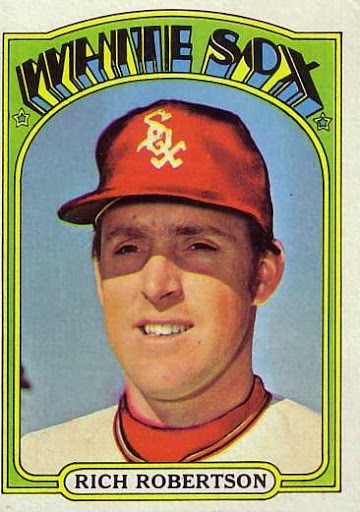 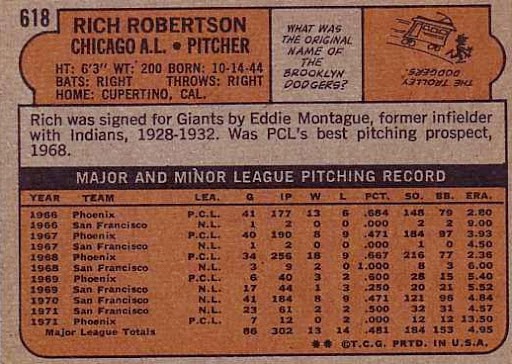 A #1 draft pick for White Sox in 1967, 14th overall…First brought up in 1970 where he hit a meager .168…had  a huge upgrade in numbers for the resurrected White Sox of 1971…hit 8 home runs, drove in 46, and hit a respectable .271…Traded to Yankees to fill the third base a position, although his background was at second and shortstop ….The exchange was for pitcher Stan Bahnsen…Stan went on to win 55 games for the South Siders….A massive steal for Chicago and conversely one of the worst trades for the Yankees…Rich flopped at his chance at 3rd base hitting .219….was sent to minors by mid season…Resurfaced in Oakland for 1973…Alternated between Oakland and AAA relegated to a pinch hitting late inning replacement role when in the bigs….quit playing after 1977.


Now for something totally different...Here is Rich's 1972card front and back... 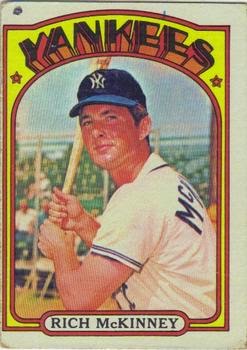 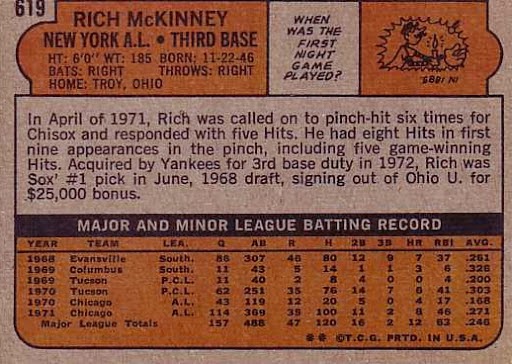 Nice, clean cut kid...
But somehow, someway a metamorphosis took place in the NY and next year the picture is this... 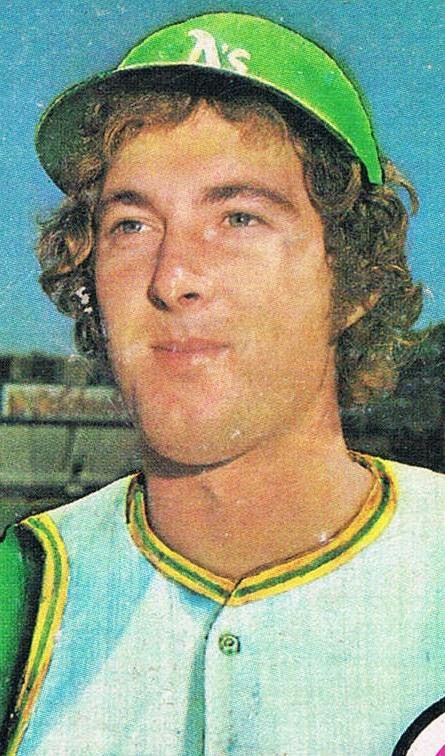 Wha happened?  My theory is that he joined the punk pioneers, androgynous glam band, New York Dolls who were starting out at the time....maybe. 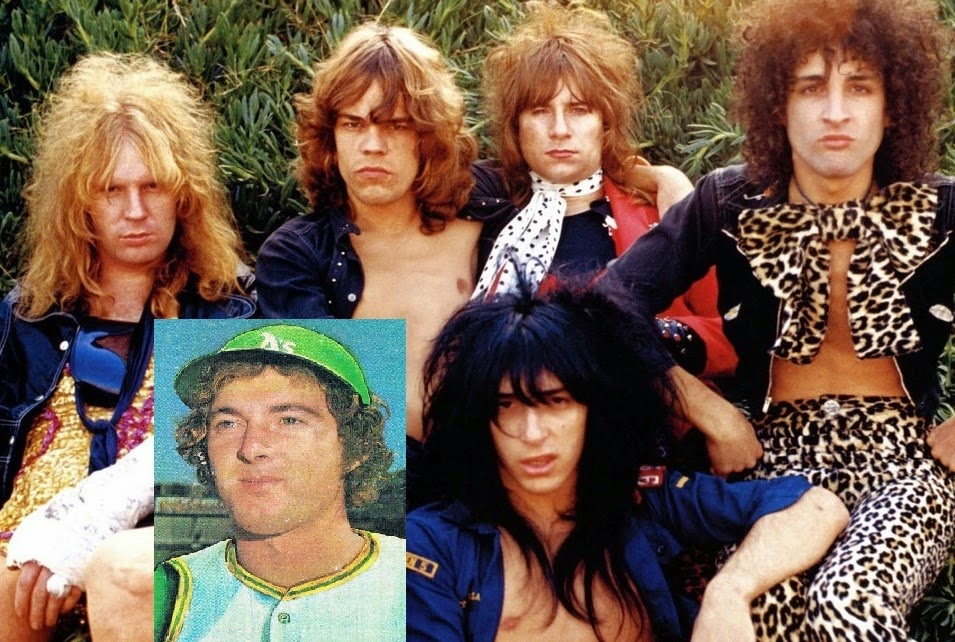 Posted by Douglas at 2:19 PM No comments: