AKA 'Chico' in fact real name of Leo did not appear on mainstream cards until 1970….slick fielding shortstop who had pop despite skinny frame…made a lot of errors but got to balls many could not touch…started in Cincinnati organization… played for the 1959-60 Havana Sugar Kings (see Preston Gomez) and political turmoil that ensued…Played a few games in Jersey City as the Kings were a mid season transplant before being called up by the Reds…A bench player at first, became a fixture in Reds infield  1962….held court a short for 7 seasons being named to 3 all star teams and one gold glove….best year was 1966 when he hit 20 HRs…Traded to Twins prior to 1969 and resurrected his career…anchored the Twins infield shoring up a spot vacated by the decline of Zoilo Veralles….after 3 seasons traded to Angels to replace the departing Jim Fergosi….however showed signs of age in the big A….hit .223 with a drop in power…lost starting role as he traded to Cleveland for 1973….One season and Chico moved on to Texas for sparse time ending in 1976. 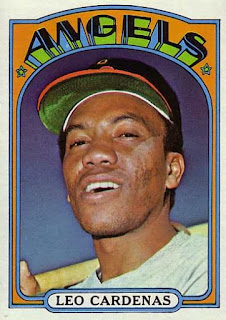 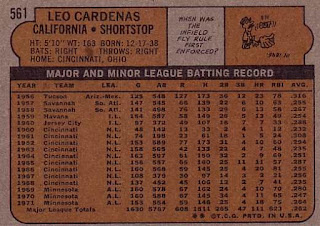 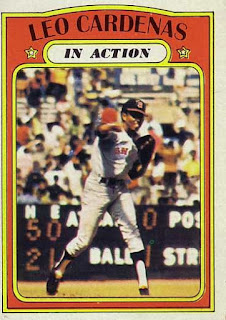 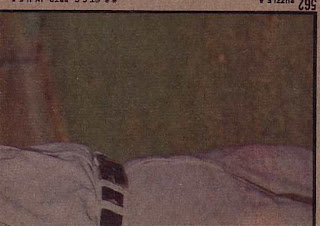 Another long timer 18 seasons to be exact…Journeyman pitcher with 563 games, starting  328 of them… wracked by inconsistency and string along one or two good seasons then his ERA would balloon with a mediocre record…first two seasons 1960-61 were an adequate start….Hiccupped in 1962…mild comeback in 1963 with a 10-10 record…next was his one 20 game win season although ERA was ten points below career average of 3.70….a return to 1962 numbers occurred 1965…traded in early 1966 to San Francisco for Orlando Cepeda…risky trade for both clubs but fortunes favored the Birds….Ray floundered in his half season…Came back in the next two seasons with consecutive sub 3.00 ERA but just could tilt the win count from a 24-24 record…1969 signaled a start of secondary starter status to spot starter to middle reliever….Trade to Mets for 1970 and spent five there…last two seasons played with 6 clubs including two return trips to the Mets and Cardinals....passed away November 2014. 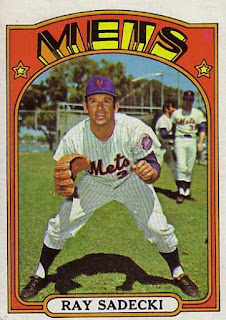 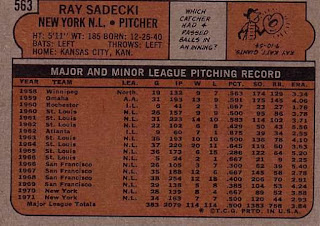 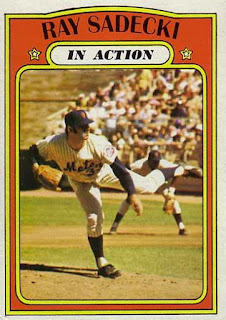 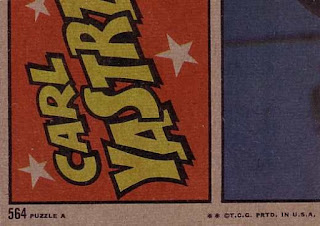 Posted by Douglas at 5:57 AM No comments:

A star but short of a superstar….did many things very well… switch hitter….kept himself in shape and was a student of the game…A healthy .287 career average with 2020 hits and over 300 home runs…drafted by the Twins but only played rookie ball with the organization…climbed up the Red Sox organization and after a cup of coffee broke into the Boston lineup in pennant winning 1967…numbers were OK but significant improvement was to come… BA jumped by 19 points in 1968….BA took off even more with a .309 mark and hit 25 home run and had 93 RBIs….in the next four seasons in Beantown, Smith did not deviate much from the 1969 benchmark…was third in AL RBIs 1971.....a 1974 trade to Cardinals did not diminish his above .300 hitting for the next two season….Had a uncharacteristic slow start in 1976 bringing on a mid season trade to the Dodgers….salvaged the rest of season hitting .280 for his new West Coast gig….Returned to form during LA’s pennant winning years of 1977 and 1978…played four more years in the bigs, three in Los Angeles…hampered by injuries  during  the final years but was able to hit .322 in 311 at bats 197980….Bowed out nicely with a 18 home runs and .284 avg. in his final MLB playing year of 1982 with San Francisco Giants….Sprinkled in 7  All star games in his 17 years....Spent two tumultuous years in Japan afterwards…turning down coaching offers he has started baseball instructional camps for inner city youth 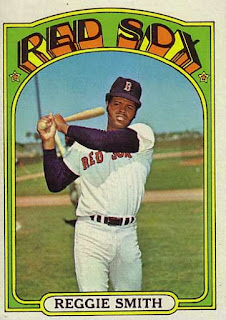 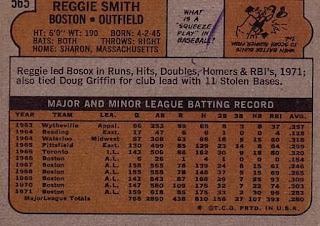 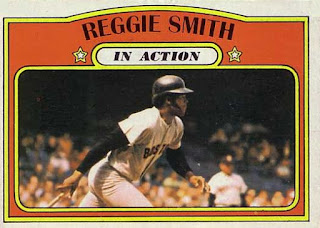 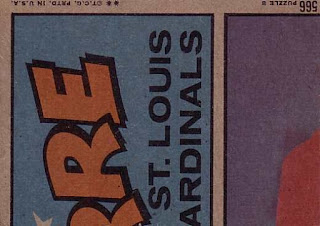 Posted by Douglas at 9:22 PM No comments:

A premiere pitcher of the 60’s…. Dominant Dominican Republic Right hander….HOF ….Unique high kick pitching style…signed during the New York Giant era, tore up minors and made smooth transition to San Francisco, going 6-2 in eleven games….next two season he would improve his standing on the staff winning 13 and 18….Breakout was in 1963 which brought 25 wins and a no hitter… Won a 16 inning complete game against Warren Spahn which some considered the greatest pitching duel ever… started an impressive resume won over 20 games in a 6 out of 7 year stretch…exemplary seasons are 1969: 21 wins and NL ERA crown:  1968 career and NL season best of 26 wins most complete games… All star game appearance in 8 out of 9 years… ….despite high sucess no Cy Young…overshadowed by Koufax in the first half of the decade and Bob Gibson in the later half….also contributing to lack of recognition was the Giants inability to make the postseason and the ugly John Roseboro incident…did not garner the high win total that was typical fashion in 1970…  in a small comeback 1971 was his last productive year …declined afterwards…14  seasons by the bay ended in 1974 with trade to Boston and his playing days over soon after….Elected to the hall of fame in 1983 a couple of years behind Bob Gibson.....“If you placed all the pitchers in the history of the game behind a transparent curtain, where only a silhouette was visible, Juan’s motion would be the easiest to identify. He brought to the mound beauty, individuality and class." — Bob Stevens in "Baseball’s Greatest Quotes" (1982)….Juan’s career is the subject of 3 books in recent years:   Juan Marichal : my journey from the Dominican Republic to Cooperstown,  The greatest game ever pitched : Juan Marichal, Warren Spahn, and the pitching duel of the century,  The fight of their lives : how Juan Marichal and John Roseboro turned baseball's ugliest brawl into a story of forgiveness and redemption. 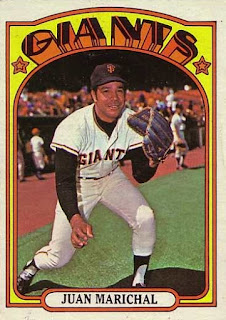 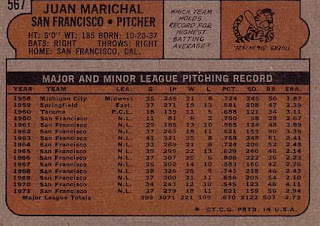 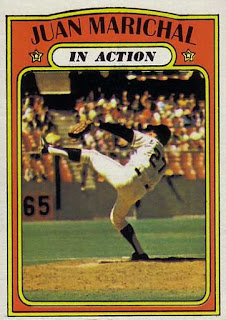 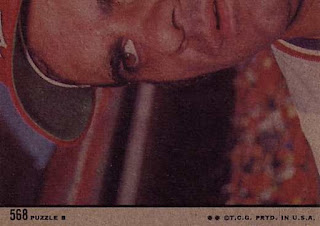 Posted by Douglas at 5:50 AM No comments:

AKA “Spanky”…. Some ball players start as catcher and go to another position, a far fewer return to catcher…free agent signing at 17 by L.A. Angels….was youngest player in AL 1962 making 6 at bats…Put up impressive minor league numbers especially during 1963 when he was 18….turned it up when promoted to AAA hit .350 in a third of a season…never got a fair shake in LA and performance suffered….shuffled several years back and forth big club and minors….was able stay in Anaheim for 1966 but hit .197….improved a bit while avoiding the minors in1968….by them Halos surrendered him trade to the fledgling KC Royals….bulk of career was spent in KC, sometimes showing good power but inconsistent BA hounded him….1969 had his most balanced season while taking over an outfield spot…. Hit 14 home runs and had a career best slugging average….played every position except pitcher…As the Royal acquired Amos Otis, was bumped to Catcher for the years 1970 to 1972…Tired of defensive liability, Ed returns to the outfield for his last year as a Royal….Ed is traded to KC east, Pittsburgh for 1974…turns to infield-outfield utilityman or pinch hitter for work…Spent his last year 1977 with three clubs, Milwaukee, Pittsburgh, and Texas….played at California AAA Salt Lake City club in 1978….passed away at age 66 in 2010. 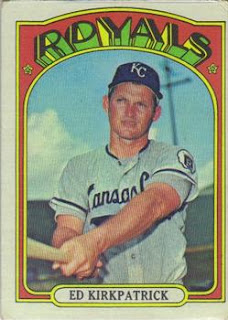 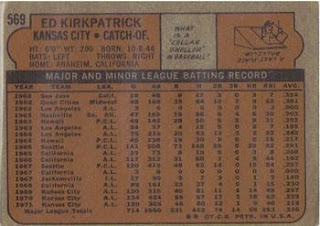 First and still is considered one of the Padre’s true sluggers…led team in home runs for first five years…while wearing the signature yellow and brown uniform, Nate’s slugged 38 home runs twice in his career which remain at #5-6 on the Padre all time list…..Never could fully break through Houston farm system despite being the Texas League home run champ in 1967…offered up the expansion draft…Turned out to be San Diego’s most significant expansion draft pick and relatively consistent player…. Three time all star starting in 1971-73…but not their first all star…still hold franchise record for most home runs with 163 a mark no where near to overtaken by a small market club…suffered a downfall in 1974 as ex nemesis Willie McCovey took over first…hit a sub par .207 and 14 home runs….spent some time in the outfield to get playing time, a very difficult transition…continued to decline after a 1975 trade to Detroit failing to get untracked as a Nate jumped from a 100 loss club to a 100 loss club…Montreal was his last real stop in 1976….Career highlight was hitting  5 home runs and driving in 13 runs in a double header in Atlanta August 1st, 1972...still highly associated with San Diego. 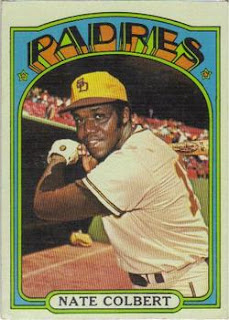 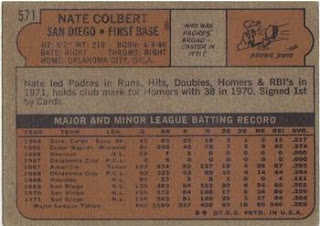 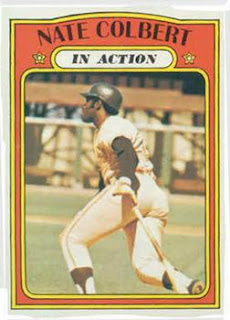 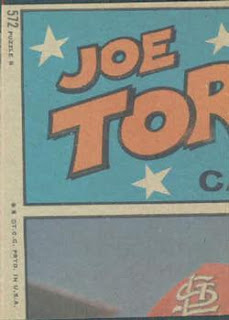 At the time, before the tabloid news, Fritz was a reliable mainstay of the Yankee staff…alternating top ace spot in the staff with Mel Stottlemyre…they complemented each other…Debuted in pinstripes in 1966 with a 12-11 record….after a sophomore slump became a top 10 hurler….a control pitcher, had fewest walks per game five years running….Peak of career came in 1970 when he won 20 and made the all star team…followed up nicely the next two seasons with 15 and 17 wins….downfall came in 1973 and 1974…in between these two season was traded to the tribe…made a one year comeback in 1975 winning 14 games…although he won nearly as games as in his prime fell well short of his norm in ERA and walk per 9 innings.... faltered out of gate in 1976 and traded to Texas where he finished his MLB career….Won 133 games versus 131 losses… Today very active on facebook and regularly sends out baseball card of the day posts….he is a romantic, never holding grudges about both his days with both the Yankees and Indians….wrote  a book “When the Yankees were on the Fritz” about the years between Mickey Mantle and Bronx Zoo. 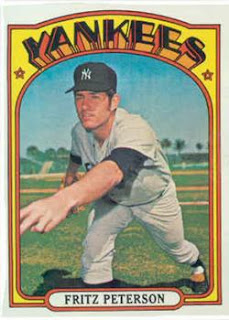 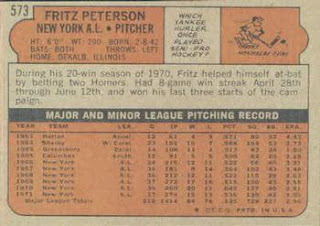 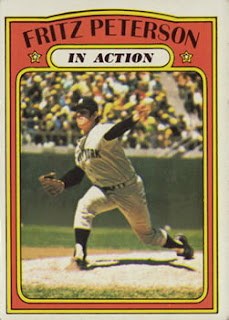 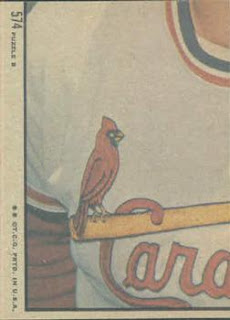 Long termer who fell short of 3000 hits by 256…a hitter’s hitter, never really had a down season at the plate in 17 full years….strong debut… second in ROY voting and more deserving based on statistics…despite excellent number sometimes had a hard time breaking into a regular spot in the Pirates talent laden line up….his ten years in Pittsburgh was a solid foundation for a career….great complement to Roberto Clemente and Willie Stargell….hit even better when traded to Texas…Al and his .319 avg. stayed for four seasons…had his career year in Montreal 1982….Led NL in batting, doubles, total bases, and hits….3rd in MVP….Al follows up in 1983 with 8 hr, 84 RBIs, .300 offensive numbers….Moved on to San Francisco while he continued to hit well .298 but he lost power and much of his RBI clout…didn’t stay and finish campaign in Philly and did bring up average to over .300 his 8th consecutive season doing so….1985 was his last year….took on a reserve role with Dodgers then Toronto ….7 time all star…for last 8 years wore “0” on the back of his jersey. 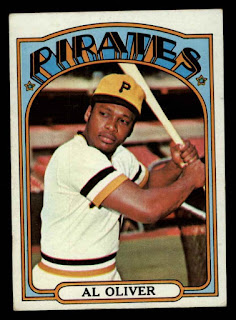 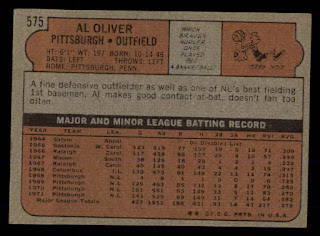