14 year veteran who was more proficient in the first third of his career than the remainder….Principle backstop for the Reds team of the early 60’s….good power and fair average augmented with all star berths and Gold Gloves…hit a wall in 1966….lost #1 status, sharing catching duties with Don Pavelich…1968 trade to Cards relegated him to backup to Tim McCarver….time in St. Louis was short lived and was traded to Astros who were cleaning house at catcher….regains bountiful playing time in the Lone Star State and is reestablished as Edwards as first string….considered by some as one the best defensive catchers ever but playing in the relative obscurity of Houston clouds such evaluations….neither hit as well for power or average in Houston when compared to the early years with the Reds….Personal best in a Astro uniform he hit .268 with 5 home runs and 40 RBIs…lost playing time thereafter….out of baseball after 1974....3rd Johnny profiled so far, all catchers. 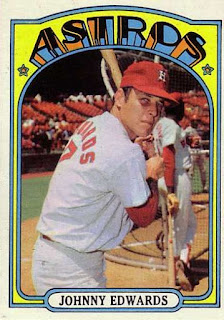 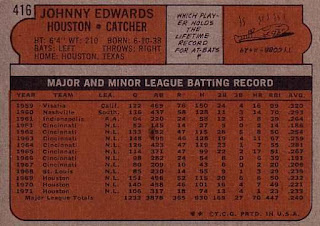 "The Blade" for his slender profile….6 foot tall, weighed at 150-160....talented but never established himself as either a full starter or full reliever….in 10 years, only one losing season 1971  his last one with the Twins….finished with a career 52-33 mark buoyed by 10-1 1972…. Started out with the Twins after tearing up the competition in the farm system….good call up 1968 and improvement in the next two successive years with a possible move to full time starter….1971 plans were offset by the Twins bullpen breakdown….after a few starts was pressed into service as bullpen specialist for majority of season….Traded to Reds and their rebound to contenders status….excellent 10-1 record….outstanding post season to boot....Played two more full seasons in the Queen city…. Career path eventually led to NYM and KC in undistinguished seasons….left the game in 1977 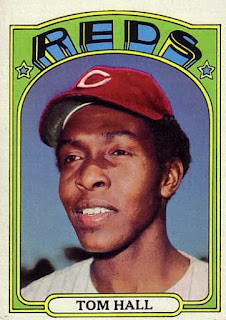 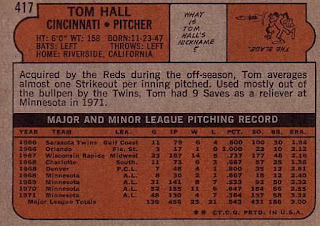 Diminutive reserve  mostly for the Orange birds….known for good speed usually asked to pinch run…..MLB time spanned 1967 to 1977….Started out with the Yankees...Impressive call up 19667 hitting .296 and slugging 2 of his 3 career home runs.... For the most part a AAA minor league farm hand….at that level a capable hitter finishing pro ball time in 1978 with .284 BA….Career MLB BA was a modest .201….Most at bats in major league season was 74 in 1971….got in five games and four at bats in that year’s world series…went hitless but in proportion to regular season work it did represent a huge increase in playing time…seamheads.com sums his career up best:  Tom the pleasure and the misfortune to play for either veteran or very good major league teams during his career. It allowed him to have some great teammates and experience a winning environment, but it also invariably meant that he never got much of an opportunity to establish himself as an everyday player. 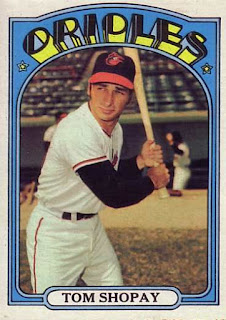 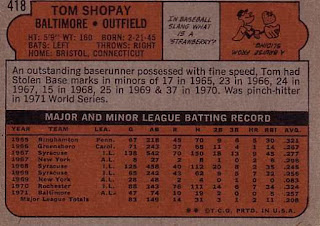 Posted by Douglas at 6:38 PM No comments:

Good glove man…at the bat his career .250 BA was indicative of good to fair offensive skills…sometimes an up and down career...started in Angels system….an organization who was not known for its hitting….1969 part timer in rookie season, worked his way to starter in 1970 highlighted by a .278 BA…suffered a decline in BA the next two years (although he hit a then career 18 home runs in 1971)…appear on his way to his third downer when a trade to Texas rejuvenated his batting stroke….was familiar with the Texas Stadium confines from his Texas League days...regained better power numbers in a two year White Sox stint during 1976-77…. Spent 1978 with NYY but struggled…In an exceptional rebound in 1979 had career bests in home runs and batting hitting 23 and .288 respectively in a DH platoon gig ...had best slugging AVG and home run per at bat on the team which included Reggie Jackson…playing and number diminished thereafter….if Jim played enough in a season he was a top contender for a Gold Glove which he won twice….passed away in 2002. 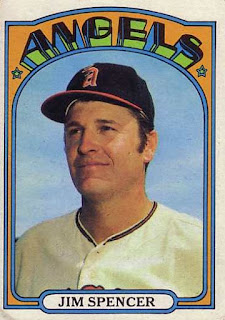 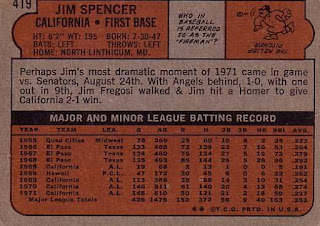 Posted by Douglas at 8:07 PM No comments:

Steve has no in action card but took his game to the next level in 1971….won 20 games for the first time a feat that would be repeated five more times….became a  Phillie for 1972…his first season there was legendary, one of most significant seasons ever....maybe the best seasonal record on the worst team….30 wins could have been in reach if not for early season shutdown and inept Phillie offense… Topps recognized the trade in card #751…despite 1971 and the historic 1972, the years of 1970 and 1973 were subpar….his real prime took place from years 1976 to 1982 when he was age 32 to 38….not done yet had a 13-7 record at age 40…. illustrious Phillie career with 241 wins….even 1-8 record in 1985, Steve had a better ERA than 1971....afterwards was rough....drawback of career was that he stayed in tbaseball 2-3 seasons too long, struggling in most outings….bounced along to SF, MN, CHISOX, and CLE….aloof and evasive with fame….best descriptor of his pitching style was from batterymate and caddy Tim McCraver…. "Carlton does not pitch to the hitter, he pitches through him. The batter hardly exists for Steve. He's playing an elevated game of catch." ….won Cy Young award four times, each time leading the NL in wins….once struck out 19 and lost…HOF all the way. 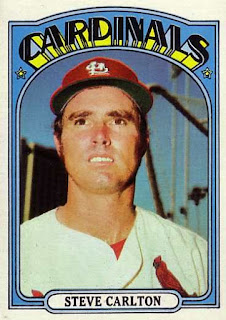 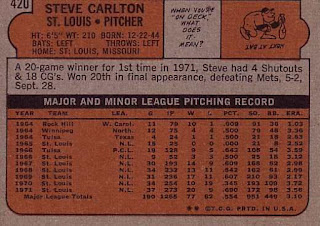 Posted by Douglas at 6:45 PM No comments:

Run of the mill at best catcher...good defensively, strong arm....mixed results offensively....despite this was a two time All Star...beneficiary of expansion and the need to fill the squad with reps from all teams...starting with as the KC Royal’s first ever representative in 1969...not so much a starter with the first year Royals but a platooner with Buck Martinez.....stumbled in 1970 and gave way to the "play anywhere" Ed Kirkpatric....Trade to Brewers for 1971 did not result in increased returns....Staged a major comeback in 1972 raising BA by 75 points and getting his second All Star nomination....was the best hitter among Brewer regulars....came down to earth in 1973 lost time to youngster Darryl Porter.…acquired by California 1974….remained in top spot for essentially two years…for lack of a suitable replacement….traded cross town to Dodgers for 1976 to where his catching rank dropped to #3…Released at the end of the season….eventually worked the Mexican League circuit off and on...born Puerto Rico but grew up New York City. 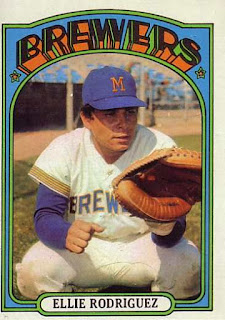 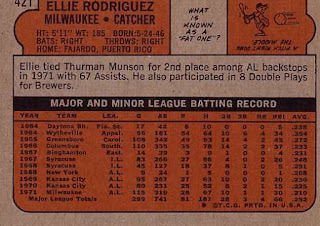 Hurler with a undefined role...never could establish self as starter or fireman...mostly a long reliever....and obscured by others...most notably was a member University of Southern California during the Tom Seaver years....drafted by local LA Dodgers....breezed thru low minors but roughed up further on...never the less given a late season trial in 1969 and stayed in 1970....6-1 record despite 4.00+ ERA....took his winning record to Cleveland...1971 his most active season..... equaled his number of wins, unfortunately had 11 more losses...did lower his ERA that year, a feat he repeated in 1972 when he went 5-6....Final season in bigs and as a professional was 1973...went 3-3 with a ERA of 4.60.... Released spring of 1974. 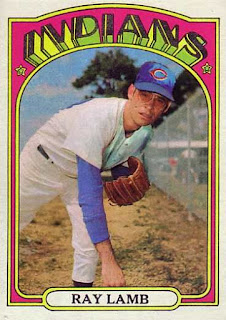 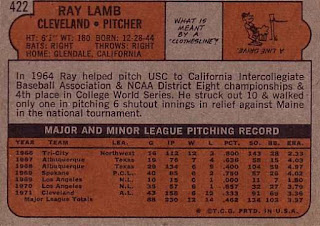 Word Association:  Q:  Afro   A: Oscar Gamble ...the hairstyle is subdued here  but what people remember is the Fro’ was at its peak in Oscar's prime years....hair style screams 1970's....started in Cubs system but got the biggest billing as a prospect as for the Phillies...Touted by Complete Handbook of Baseball as the new Lou Brock....Players were long way apart....Gamble never showed Brock’s speed, fielding, and long term consistency...Brock never had Gamble’s power outbursts.....Failure in Philly never playing a complete season with being sent to the minors....Afterthought trade to Cleveland allowed to take advantage of the new DH rule....once Indians dealt him to NYY, Oscar started a journey of 5 teams in 4 years...starting with Yankees 1976...on to South side Chicago for 1977, stepped up his game and had a career season with 31 home runs and 83 RBIs...had AL’s best home run to at bat ratio...reaped  the monetary benefits of the infant free agency market in San Diego... increased salary by nearly 500%....a fair BA but production was way off for the Padres...rebounded with .358 BA in 1979 splitting time between Texas and a return to NYY...Good results but never regained regular status...completed another tour with White Sox in Swan Song season of 1985...hit 200 home runs 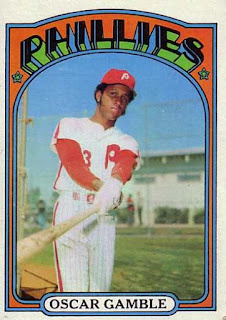 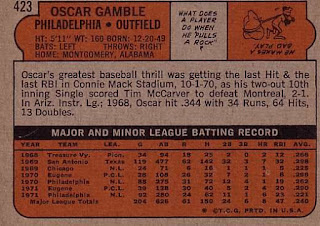 Go Go Gogolewski....Wisconsin product....toiled for both Senators and Rangers incarnations ...above the Senator’s level of par in rookie season...a winning record and 2.67....an inning eater in Texas but lost early and often and could have suffered from shell shock...his 4.23 ERA was above the team average but not so bad by today’s standards....1973 was somewhat of a repeat the only difference was that he was relegated to the bullpen….meaning less decisions and innings….Return to starting in 1974, but for Cleveland’s farm system….was only able to get up to the show for 5 games….released and picked up by Chisox in 1975…was able to stay up entire year but used sparingly….released and quit the game thereafter. 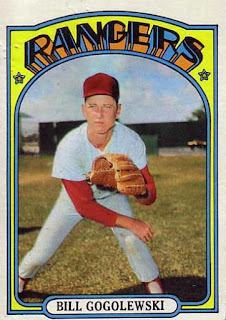 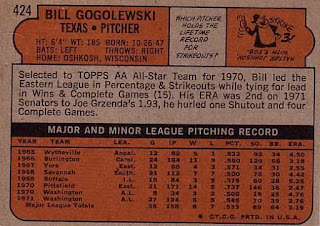 Posted by Douglas at 2:48 AM No comments: