Stymied Manager…greek tragedy saga….two foiled, highly, documented endings snatched defeat from jaws of a World Series berth….nevertheless interesting and long career….as a player appeared in 9 separate campaigns from 1944 to 1957 strictly as a reserve….odd fact most used and had best production in last season….First taste on the helm one season 1953 was Atlanta Crackers player-manager…Started managerial life 1958 with Minneapolis Millers…Success led Millers to Little World Series again Havana Sugar Kings in series that defies description…The Millers lost but more aptly surrendered to baseball crazed revolutionaries…graduated to be the Phillies leader….rough going lost 107 games in 2nd season 1961 his worst win %…significant turnaround in 1962 edging a winning record at 81-80 and 34 game improvement…team continued to improve and led the NL most of the 1964…then the infamous breakdown, losing out to Cards for the pennant….subsequent Phillie teams had winning records but could not break the NL top stop…shown the door mid 1968 (given the W-L records of future teams it may have been for the best….Moved on to the newly minted Montreal Expos…typical of first year team terrible at 52-110…vowed improvement  and 1970 the Spo’s won 73…trouble was Montreal would not reach 80 wins in the rest of Gene’s time there…let go after 1975…Took the reins at Minnesota in return to the Twin Cities…was able have two winning seasons but no AL west crown…remaining three years the Twins were crippled by free agent losses and bad front office practices…Ushered out in 1981….resurfaced in have native California…resume sported two playoff appearances both close but losing effort…particularly heartbreaking he and the Halos were one strike from WS berth in 1986…only to spoiled by obscure outfielder Dave Henderson…In shadow of the upsetting events the Angels were not the same in 1987…Gene was let go after a 75-87 season… passed away 2005. 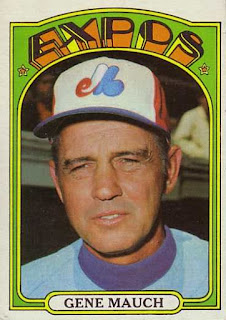 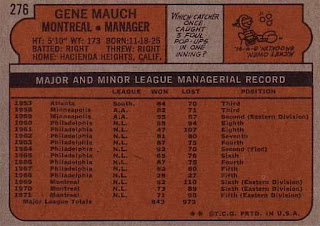 Aspiring prospect who was well traveled…Native and draftee of Detroit the product of U of Michigan…Big Ten Batting champ…After two years in low minors took a huge jump to Tigertown…fared OK but could not break the veteran laden roster…tagged as promising but shipped off to Washington in the Denny McClain trade…Washington/Texas stretch was a mixed bag....sold to NYY 1974 in a minor transaction…Began to reach his potential hitting .304 making his mark as a line drive hitting and an amazing fielder…garnered some MVP votes….Good stuff continued into mid 1975….hitting .307…On June 13th slipped on a rain slicked field…out for season with knee tear and Maddox was never the same player…in the questionable effort sued the city of New York for Shea stadium conditions….suit was torn out of court….never the less a comeback was long and extended…barely played in 1976 and 1977 when Elliott donned an Oriole uniform…Return to NY was by way of joining the Mets…odd in that the Mets were also named in his lawsuit against the NYC….regained more playing time for three years averaging 112 games per season and pulling down a .255 BA…career consisted of three quarters time in outfield one quarter in infield…Oh what could have been. 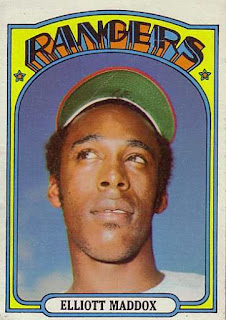 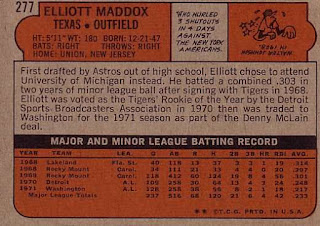 Posted by Douglas at 5:44 AM No comments:

Below the radar career reliever….actually an unsung hero as the 1969 Senators rose from AL bottom division to win 90 games….lead team in saves with 16…..A 1970 trade to Indian turned out bad for both Dennis as a player and Senators as a team….The result Senators returned to the basement and Higgins’s ERA with the Tribe rose….acquired by St Louis but was non factor at this point, spending most of 1971 in an ugly AAA stint going 2-11…called up regardless by the terminus of St. Louis….was able to log in 15 games for Cards in 1972 his final pro season….started with ChiSox 1966…appeared in 42 games and career best 2.52 ERA in debut season…sidelined most of 1967 with eye problems but came back in 1968 with the Nats. 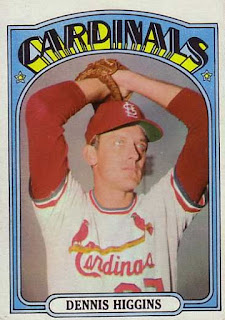 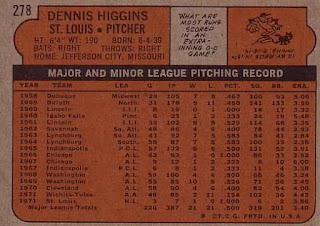 Posted by Douglas at 6:46 AM No comments:

Player  once starting AL shortstop now faced with a declining workload…majority of his 1963 to 1974 career was spent in Cleveland….debuted with the tribe….Started strong in 1964 and 1965 but had trouble hitting above .240 thereafter.....still held regular or near regular status until 1970.....In 1971 spent most of as an Oakland A....part of their veteran journeyman acquisition program, a team policy which was the law of the land for several years on….still retains non demoted MLB employment without fanfare…after the A’s took flight to Baltimore and then Texas….appeared in the 1973 playoff for the Orioles, something he was not able to do with two prior years in Oakland.... known for sure hands, strong arm, and defensive versatility….not so much his bat given his .233 BA…had a brother in the big leagues Dick Brown, a lifelong catcher. 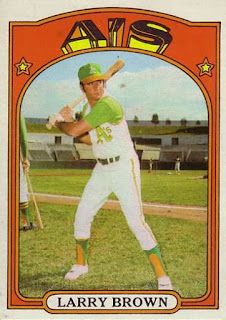 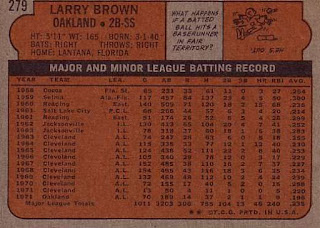 Take your pick of titles;  Stretch or Big Mac….The water outside of the Giants PNC field right field wall is known as McCovey cove a testimony to the man….HOF with incredible bulk that put the fear of God in pitchers…a natural swing know for making laser shots making infielder and pitcher alike to ask for hazard pay….Rookie season was mostly spent in AAA….Nevertheless took rookie of the year honors with .354 BA in essentially two months work after call up…despite this had to compete for playing time with fellow 1st baseman and prior ROY Orlando Cepeda…neither were proficient in other positions leaving a Giant quandary…hence next 3 season averaged 260 at bat, with 17 HRs, and 50 RBIs…seeing the glut of slugging McCovey gets the nod in the outfield in 1963 with the sacrifice of defense for offense…Willie responds with NL best 44 home runs…..1964 is a down year hitting .220 a pattern eventually repeated over the course of his career….Returned to his 1st base position in 1965 with Cepeda mostly on the DL return Willie to prominence…1966 with two compromised player incapable of outfield work, Cepeda is traded….McCovey enters a five year prime including two home run/RBI titles and an MVP award 1969…1971-72 were lost years as injuries equated to DL time….bounces back in 1973 (but not to the degree as in his prime years)….seeing high value is traded to the Padres…puts in two full years but stumbles in 1976….winded up in Oakland and failing .204 BA….a free agent took a flyer across the bay back to the Giants….Responded with his 3rd major comeback in 1977…28 home runs and .280 BA….was able to contribute for a couple more Giant campaigns ….made 500 home run club 1978….HOF first ballot 1986. 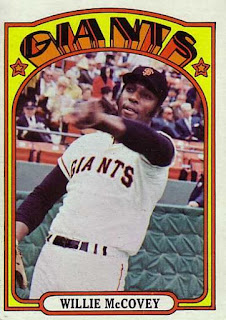 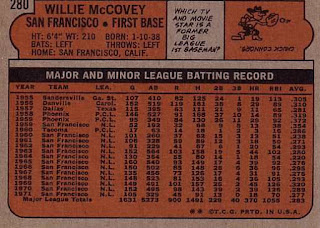 The problem with players in expansion teams is not they can’t have good season or two, they just can’t do it consistently….in most cases….Bill's arm troubles are to blame during 1973 after two successive 13 win seasons….was #2  AL rookie of the year  voting  and named AL rookie pitcher of the year for 1971….that year his 13-17 mark was offset by a sparkling 3.20 ERA….could have sued the Brewers for non support…7th round armature draft pick in 1968 by the Seattle Pilots…1972 won 13 games again....1973 was 3-6 with 6.79 ERA but somehow stayed with Milwaukee…demoted to Brewer AAA farm club in Sacremento in 1974 then traded to Oakland AAA club…his 5.05 ERA was high but playing with Sacremento was in a converted football stadium ….the team ERA mark was 6.70 so it could be called a Pyrrhic victory….resurfaced briefly with Oakland’s big club….another go round in AAA 1975 sputtered out. 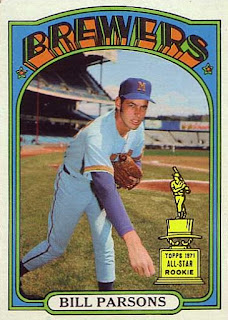 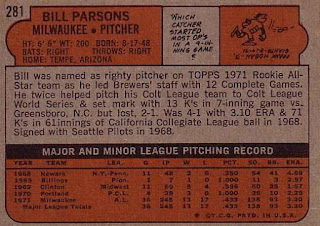 Team  Born as the politically incorrect Colt .45’s complete with smoking gun logo….Circa 1962 Houston and the Mets were made to cut off the intended rival Continental League at the pass….first year 24 wins better than their expansion siblings the Mets….and better than the Cubs too…subsequent years always seem to have a slight edge over the Mets but no major climb upwards ...major event in 1965 moniker Astros took over with the move to Astrodome adjacent to original home and provisional Colt Stadium….reached .500 in 1969 but the Mets surpassed them and everybody by being World Champs….sad to say on the subject; one World Series for 55 years of work, plus team has yet to win a game in the WS….team has fielded strong squads during the1979-1981, most of a 10 year span 1995-2005…and bad one stretch of 100 loses in 2009-11…on losing end of an incredibly close 1980 NLCS playoff…moved to American league in 2011…Two hall of famers that stayed with franchise for the duration…Craig Biggio and Jeff Bagwell….HOFer who spent 9 seasons Nolan Ryan…HOFer who started and spent 9 years plus adding one more Joe Morgan…other notables Jim Wynn, Lance Berkman the unfortunate J R Richard and tragic and Don Wilson. 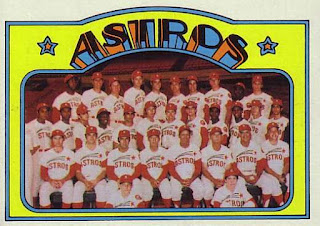 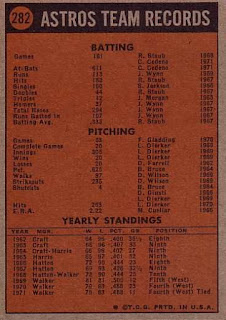 Don't look for Darrel's name in Baseball Reference, type in Bucky Brandon instead....Changed teams eight times three franchises before first game in majors…An odd career missing a beat on some teams highs and  a positive landing in other’s team’s lows….Once in majors played for Red Sox (but was not effective in 1967 WS year) was an expansion draftee by Pilots, acquired by Twins…found a home with Philadelphia….claim to fame is three .500 seasons in debut year of 1966, 1971, and 1972….the last is most interesting for by going 7-7 he was #2 in Phillies wins just barely edged by Steve Carlton who had 19 more…without this dynamic duo chipping their records the Phillies went 25-80….dubious claim to fame…mediocre 973 spelt the MLB end for Bucky although he played another year in AAA. 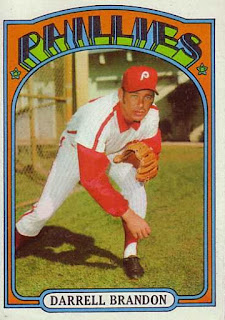 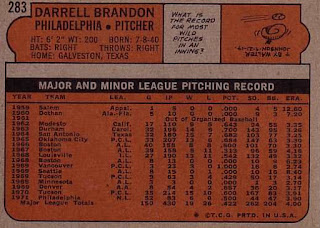 One MLB team: Tigers…but gained notoriety as being one of last negro league players along with Hank Aaron and Paul Casanova….Signed by Detroit in 1962….worked his way up until he finially saw MLB light of day in 1969…career bench reserve….a pinch hitter…some pop with employment span of 1969 -1973….not be confused with teammate Gates Brown who also served as a good hit reserve….passed away 2006. 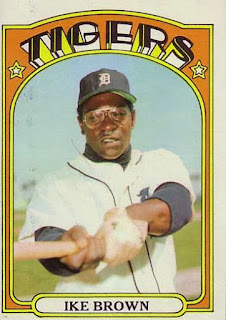 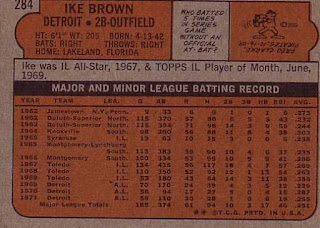 A mound craftsman and crafty character….HOF shrouded in the spitballer label….reporters went so far as to ask his 5 year old daughter if he threw a greaseball, without hesitation replies “it’s a hard slider”….The fun started in 1966 after an extensive development running four years….That year established as a starter went 21-8….then taking the win in 15, 16, 19, 23 contests in four seasons….the later being good for 2nd in 1970 NL Cy Young….maybe felt a twinge of jealousy as brother Jim took the AL Cy Young with 25 victories….1971 his last SF year won 16 games....through his SF years the better his ERAs was the smaller his win total…That all changed after trade to Cleveland for 1972….proceeded to set the baseball world on its ear with 24 wins and the AL Cy Young award….Equally incredible was the record in light how bad Cleveland was at the time….A massive steal for Indians and Giant sunk quickly....Mystified AL audiences as to where he was hiding his grease…Neighbor of mine swore gunk was hidden in Craig Nettles shoe….had OK follow up in 73 with a 19-19 accompanied by a 3.44 ERA…note Nettles was gone….must of got someone to take the Nettle’s role in 74 when he reached 20 games for the fourth time….However ran into conflicts with new manager Frank Robinson in 1975….Traded to Texas…had good years but not the heights reached with Giants and Indians….a trade to San Diego another steal....Gaylord's last great season in an impressive career….at age 39, went 21-6 and took the 1978 NL Cy Young….Career thereafter was a continuation of a workhorse load but wins became more elusive….traveled often SD, Texas, NYY, Seattle, and KC were his homesteads….won 300th game 1982 in a Mariners uniform….one of the most dominant pitchers to have played for both leagues….he and brother Jim are second in the all time win list by siblings to Joe and Phil Niekro. 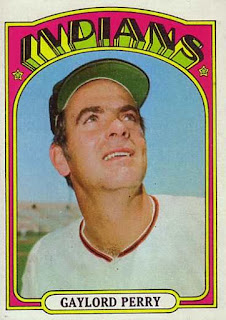 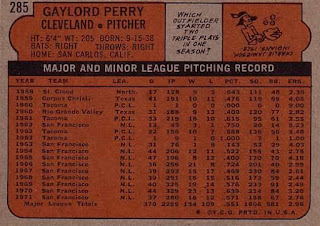