Hopes were high on the wings of Angel’s strong showing in 1970 going 86-76....1971 resulted in an inverse record of 76-86 and a documented cancerous clubhouse debacle.....Trailblazer of AL westward expansion circa 1961....better than average records out of the gate for an expansion team (3rd place and 10 GB for pennant)....but after the early stars burnt out the franchise fell behind the AL pack.....became known as being pitching strong, hitting deficient....The traces of the early aces show up on the backside....Dean Chance’s 1.65 ERA and shutout marks still stand today but the bulk of team pitching marks are the making of the soon to be 1972 import, Nolan Ryan....Other Angel record holdovers are Clyde Wright 22 wins in 1970 (subsequently tied with Ryan)....Sandy Alomar still holds at bats in a season mark along with being tied with several others for most games....All other team leader marks are set by players after the year 2000.....Angels fortunes have been enhanced by the advert of free agency.....but the team has also endured more than its share of tragic deaths, Chico Ruiz, Mike Miley, Lyman Bostock, Donnie Moore, Dick Wanz, and Nick Adenhart.....Angels are a tough go in playoffs, only one World Series win to show in ten post season appearances.....Sixty one years of activity the franchise’s cumulative W-L record continues to hover at or near the .500 mark.....Team has had five name changes with Los Angeles Angels being used twice, at the team's inception in 1961 and the present day....most significant position player, Mike Trout.....most team career wins Chuck Finley. 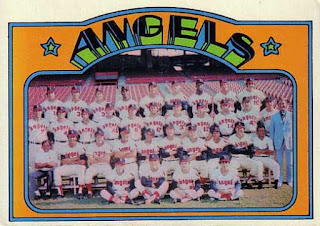 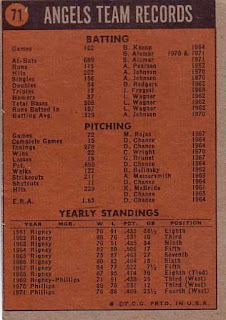