Considered more glove than bat, more reserve than everyday player....Light hitting shortstop with little power.... a second round draft choice by the Reds who saw promise in the all sport star in high school....1968 landed at Sparky Anderson’s AA  Asheville farm team....hit an uncharacteristic 23 home runs, which drew the attention of Reds brass....1969 given a chance at short by the departure  of long time incumbent Leo Cardenas....a fail at the plate and for the next three years vying for playing time with veteran Woody Woodard and  then upstart Dave Conception....spent most of 1971 in minors....Conception finally develops into a fully functioning Big Red Machine cog, hence throwing Chaney into a late inning replacement....a 1976 trade to Braves reunites him with his first MLB skipper, Dave Bristol and gives him his only season of regular work....153 games and 492 at bats...personal bests in several batting categories...the second time in 11 years Chaney hits above a .250 clip apparently his optimal best...only to follow by repeatedly hitting at or near his weight the following season(s)....released after the 1979....Being a Red, got in considerable post season action....1972 WS: made things interesting in game 7 by getting on base via hit by pitch in the last of the ninth in game 7. 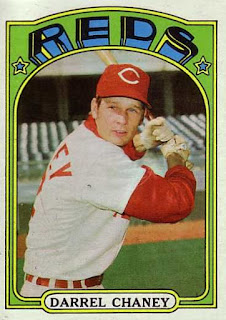 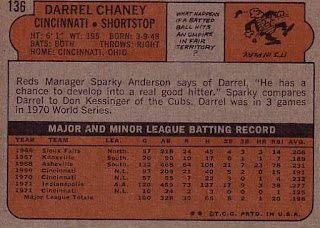