Top of the line of NL backstop in the mid to late 1960s until the intro of Johnny Bench…From 1963 to 1967 was probably the best “true” catchers in the circuit passing by an aging Del Crandall and Ed Bailey… Arguably Joe Torre hit better and got more All Star appearances than Tim but Joe often took the role of infielder….Caught the eye of the Cardinals organization at age 17 who signed him in 1959….spent first year pro ball mostly in low minors up the Mississippi River at Keokuk Iowa…his .360 BA earned him a late September call up….The nurturing Red Birds then assigned their young prospect to his hometown of Memphis to engage the AA Southern League competition….responded well to home cooking hitting a .347 clip a two game call up…Given his press billing the climb to AAA in 1961 was a step backward….rebounded enough the next year to get an opening day birth on the 1964 Cardinal team….Never looked back, establishing himself as a regular nearly instantly….hit .289, 14 points higher than his AAA BA….hit also better than ROY award winner Pete Rose…but McCarver was 11 at bats past the criteria putting McCarver ineligible for the award….1964 stats were a clone of the year before but Tim’s pinnacle was his .478 BA in the world series as the Cards defeated  the Yankees….Next two years McCarver maintains his yeoman work…led NL in triples 1966, surprising batting stat for a catcher….1967 registers personal highs home runs,  RBIs, and full season BA….McCarver finished second in MVP voting to teammate Orlando Cepeda…. did not reprise his 1964 WS production but Red Birds get their second crown in the 60’s…..1968 and 69 McCarver down shifts to solid journeyman… but the birds make it to the 1968 October classic and hits .333 but Cards were downed by the Tigers….McCarver’s decade long relationship with St Louis is sidetracked with a trade to the Phillies….spends two and a half years with floundering club….Phillies starting to clean house in mid 72 ship him to Expos who are marginally better….from this time on McCarver is frequently traded and evolves to job sharing platoon work with younger talent….1973 reunites with the Cardinals for a full season and part of 1974….acquired by the Red Sox who use him sparingly….McCarver viewed his release by the Sox as the end of his playing days….A well liked and known personality returns to Philly looking for a broadcasting opening….pressed into service to provide veteran leadership for the up and coming Phillies….proceeds to stay for all or a portion of 6 seasons...became Steve Carlton’s requested backstop….added three playoff appearances….Once playing days were over Tim then sidesteps to a highly successful broadcast booth career which exceeded his time as a player….Retired from the booth in 2013…during playing days listed dancing and collecting matchbooks as his hobbies. 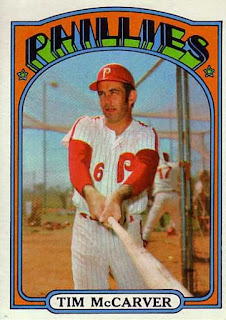 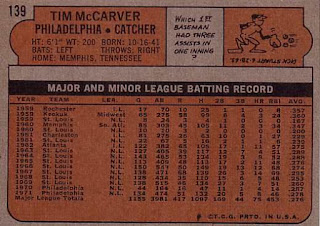